On Monday, February 13, 2017, the Institute of European, Russian and Eurasian Studies hosted Mr. Oleg Kravchenko, Deputy Minister of Foreign Affairs of the Republic of Belarus. Mr. Kravchenko spoke on the upcoming anniversary of Belarus-Canada relations.  In 2017, Canada will mark the 25th anniversary of diplomatic relations with the Republic of Belarus. The event inspired Mr. Kravchenko to discuss the foreign policy of Belarus towards their neighborhood including Russia, Ukraine, and Eastern European countries and he provided an outline of the growing potential for Belarus-Canada relations 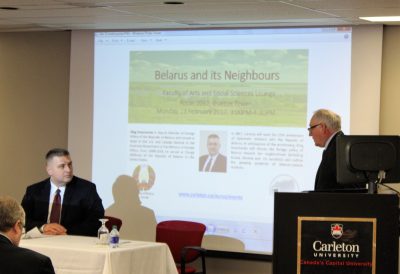 Students from across disciplines attended to ask the Deputy Minister questions and hear more about the future of Belarus-Canada relations. Included in the audience were the Ambassadors of Ukraine, the Russian Federation, and Latvia. More than fifty people attended and the lecture drew attention from several media outlets including The Hill Times.

CHIN Radio Ottawa host, Elena Kaliberda, interviewed Mr. Kravchenko for the Russian language radio program, “From Russia with Love.” The interview aired on February 19 and is available as a podcast (first 10 minutes), http://www.chinradioottawa.com/index.php/podcast/russian.