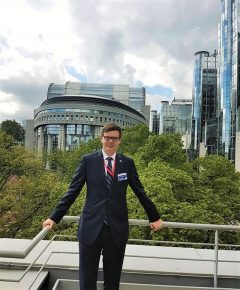 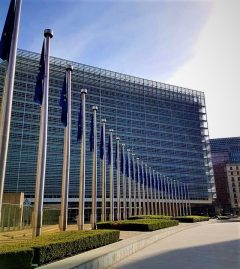 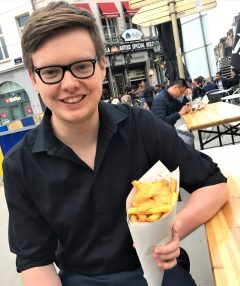 Enjoying some frites in Leopold Park.

April 2018: I had the amazing opportunity to conduct field research in Brussels, Belgium. This opportunity was only possible due to the generous funding by the Centre for European Studies at Carleton University through the EU Travel Grant. The grant allowed me to supplement my thesis research which is entitled “Europeanization, Labour Sectors, and the Posting of Workers Directive.”

My research focuses on the Posting of Workers Directive, which has been a highly
contentious debate for more than two decades. The Directive in essence deals with two of the
European Union’s focuses, the economics of the Single Market and social rights found within the
Social Pillar. The Directive has many issues, but I have chosen to look into posted workers, which
are workers that are employed in one-member state and carry out a service contract in another
member state, and how trade unions’ in Europe can help these workers. I will also analyze why
there are varying levels of implementation of the Directive between member states and between
labour sectors. My time in Brussels really drove home the point for me that the Posting of Workers
Directive is still being debated heavily between all social classes and political elites, for example
I ran into many posters and banners in Brussels that promoted one side or the other (more
regulation or no regulation).

My trip to Brussels involved in person interviews, intense library and archives research
and ended with my participation in the Brussels Model European Union. The interviews were with
prominent European labour scholars and proved to be very helpful in better understanding the
priorities of transnational unions and their involvement with posted workers. Due to logistical
reasons I was unable to interview all those that I wished to meet, however I was able to set up
future interviews through Skype with these experts and MEPs. The most rewarding part of the trip
for me was the wealth of resources that I was able to access through various libraries. The European Trade Union Institute’s ‘Documentation Centre’ and the European Commission’s library allowed me to research highly niche topics, as well as, provided many great French language sources. Lastly, I was able to participate in the Brussels Model European Union, a five-day long simulation of the functioning of the European institutions. One of this year’s topics was on my research topic of the Posting of Workers Directive, which gave me great insight into how difficult the topic is to debate in the European Parliament and how many differing interests there are in the debate. More importantly, I have now made a network of fellow graduate students and scholars that are also focused on the Posting of Workers Directive.

As I continue work on my thesis I am sure that the interviews, sources and networks I have
gained through this Travel Grant will be vital and supplement my research greatly. Again, I would
like to thank the Centre for European Studies at Carleton University for this once in a life time
experience, it has provided me with deeper knowledge of the Posting of Workers Directive and
the actors involved. Furthermore, it has opened many new avenues of research and contacts that
will prove invaluable.