Home / Who We Are 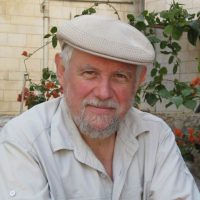 Seymour Mayne is the author, editor or translator of more than seventy books and monographs, including anthologies and critical texts. In 2020, he retired from the Department of English, Faculty of Arts, University of Ottawa, where he taught Canadian Literature, Canadian Studies, and Creative Writing. Professor Mayne is now Professor Emeritus in the Faculty of Arts. Although he has stepped down from his position as Coordinator (Directeur en francais) of the Vered Jewish Canadian Studies Program, he continues to serve in that unit. He is a five-time winner of the Canadian Jewish Book Award, most recently (2018), for his publication, In Your Words: Translations from the Yiddish and the Hebrew (Toronto: Ronald P. Frye and Co.). The collection offers translations from the work of Yiddish Canadian poets, Rachel Korn, Melech Ravitch, J.I. Segal, and Abraham Sutzkever, one of the great poets of the Holocaust. He is also a recipient of the J.I. Segal Prize and the ALTA (American Literary Translators Association) Poetry Translation Award for his renditions from Yiddish.

His academic work on behalf of his students has been recognized with teaching awards and accolades. In 2019, Mayne celebrated the publication of his 75th book, Wind and Wood: Word Sonnets, a four-language collection published in South America. The editor and co-translator is Professor Maria Laura Spoturno of the National University of La Plata, Argentina; the publisher, Milisia, Editorial. Wind and Wood is a sequence of short poems that draws not only on the practice of shorter forms, such as the haiku, but also on the pithy expressions that characterize Pirkei Avot or Sayings of the Sages, the Talmudic tractate of maxims, proverbs, and resonant images. The book also includes a prefatory interview in which the author provides commentary on the word sonnet, a sub-genre for which he is known as the leading international innovator.

As mentioned above, Professor Mayne received the Canadian Jewish Literary Award (CJLA) in the Yiddish category (2018) for his publication, In Your Words: Translations from the Yiddish and Hebrew (Toronto: Ronald P. Frye and Co.). The collection offers translations from the work of Yiddish Canadian poets, Rachel Korn, Melech Ravitch, J.I. Segal, and Abraham Sutzkever, one of the great poets of the Holocaust. Complementing the Yiddish is a selection of poetry in translation from notable contemporary Hebrew poets.

Also in 2018, Le chant de Mose/The Song of Moses (Montreal: Mémoire d’encrier), biblical poems translated into French by Caroline Lavoie was published. Professor Mayne notes, “I was introduced to the stories of the Hebrew Bible very early–in kindergarten…. From those early years the stories of our matriarchs and patriarchs were imprinted on my imagination. What made them so vivid was their resemblance to the behaviour of my immigrant Ukrainian-Russian Jewish family… So, I read my family through the filter of biblical stories, and I understood the tales of Genesis as they reflected family experience.” This collection includes an introduction by the author and highlights originals (with French translations) that draw on creative readings from the midrashic tradition of commentary.

His recent book (2020), Cusp: Word Sonnets, translated by Mikhail Rykov with an introduction by Natalia Vesselova, was recently published in Saint Petersburg, in a bilingual Russian edition. This volume was originally released in English in 2014 by Ronald P. Frye & Company to mark fifty years since Mayne’s first collection was published in Montreal. Cusp: Word Sonnets has also been published in French, Portuguese, and Spanish editions.

His latest book of poetry, Perfume: Poems and Word Sonnets, was released in October of 2020 https://www.ronaldpfrye.com/. This volume marks fifty-six years since the publication of his first collection of poetry, That Monocycle the Moon, in Montreal. Perfume includes work that is a distillation of his writings of a decade and more.

Listing of publications and media:

Seymour Mayne’s book, Cusp: Word Sonnets (2020), was recently published in Saint Petersburg, in a bilingual Russian edition, and is for sale at bookstores in the Russian Federation.

Librarians and interested readers may order copies of the book direct from the publisher, Silver Age, either via regular or e-mail communication: