Below is a listing of all Zelikovitz Centre events that occurred in 2017. 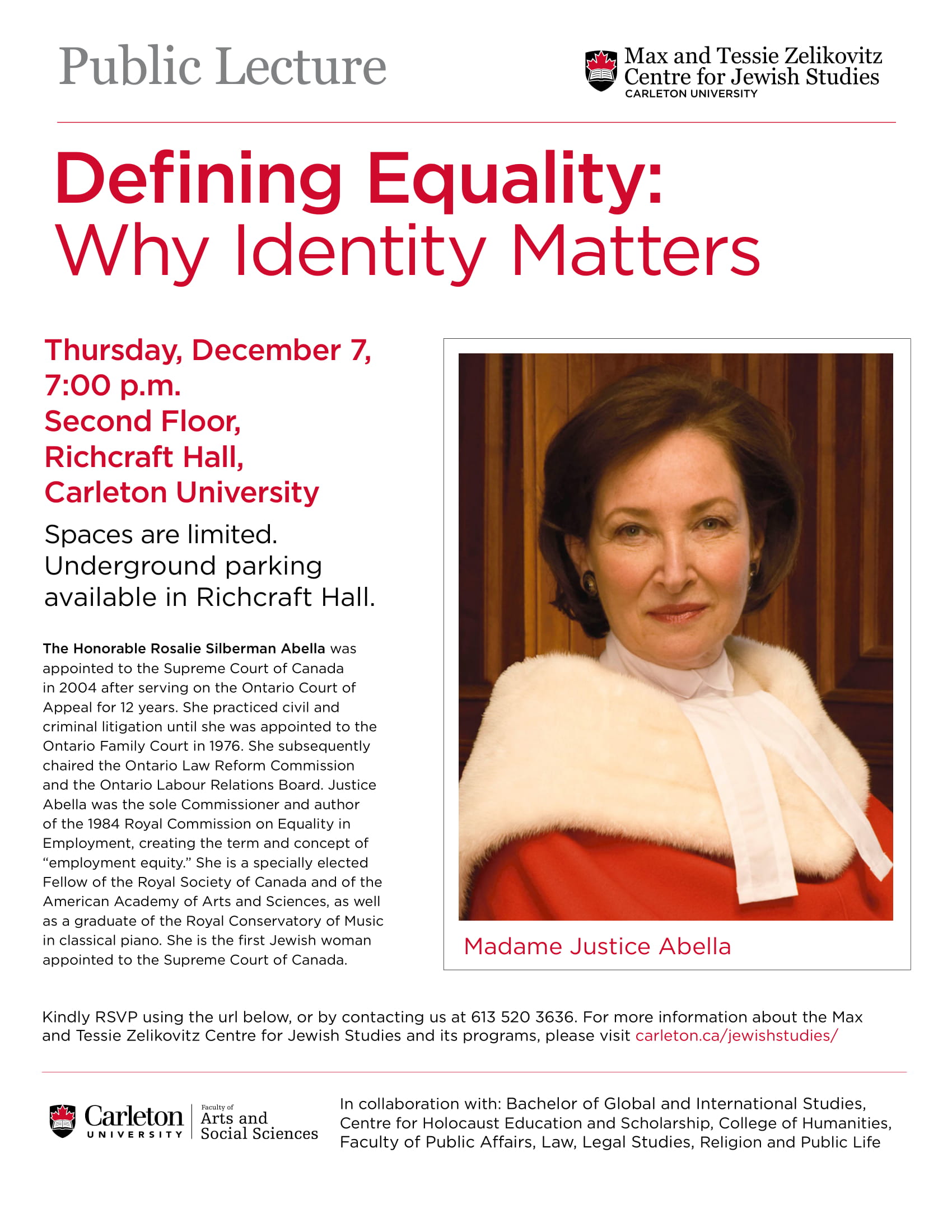 Join us for an author-led discussion about the tragic story of the SS Cap Arcona. Acclaimed author and speaker, Robert Watson, Ph.D., has published over 40 books and hundreds of scholarly articles, chapters, and essays on topics in history and politics. His book, The Nazi Titanic, tells how in the final days of the Second World War, the ship was packed with thousands of concentration camp prisoners who suffered in poor conditions as they waited for the end of the war. Just days before Germany surrendered, the ship was mistakenly bombed by the British Royal Air Force, and nearly all of the prisoners were killed. Books will be available for sale following the talk.

Presented by the Jewish Federation of Ottawa.

In Conversation with a Survivor – Kati Morrison

Prof. Deidre Butler will host Survivor Kati Morrison and screen her testimonial in her “Introduction to Judaism” class.

Presented by the Centre for Holocaust Education and Scholarship in cooperation with the Department of Religion at Carleton University.

2017 Teachers’ Workshop: 70 years since the arrival of 1,123 Holocaust orphans to Canada. Immigration Then and Now: What Can We Learn?

Keynote address: Robbie Waisman, one of the 1123 Jewish orphans who were admitted to Canada from 1947 to 1949.

Special presentations by CBC journalist Judy Trinh, who arrived in Canada as a refugee with the Vietnamese “Boat people”, and Elin Beaumont of the Educational Outreach and Program Coordinator of the Holocaust Survivor Memoirs Program at the Azrieli Foundation.

Presented by the Centre for Holocaust Education and Scholarship, in cooperation with the Temple Israel, Zelikovitz Centre for Jewish Studies, and Azrieli Foundation. 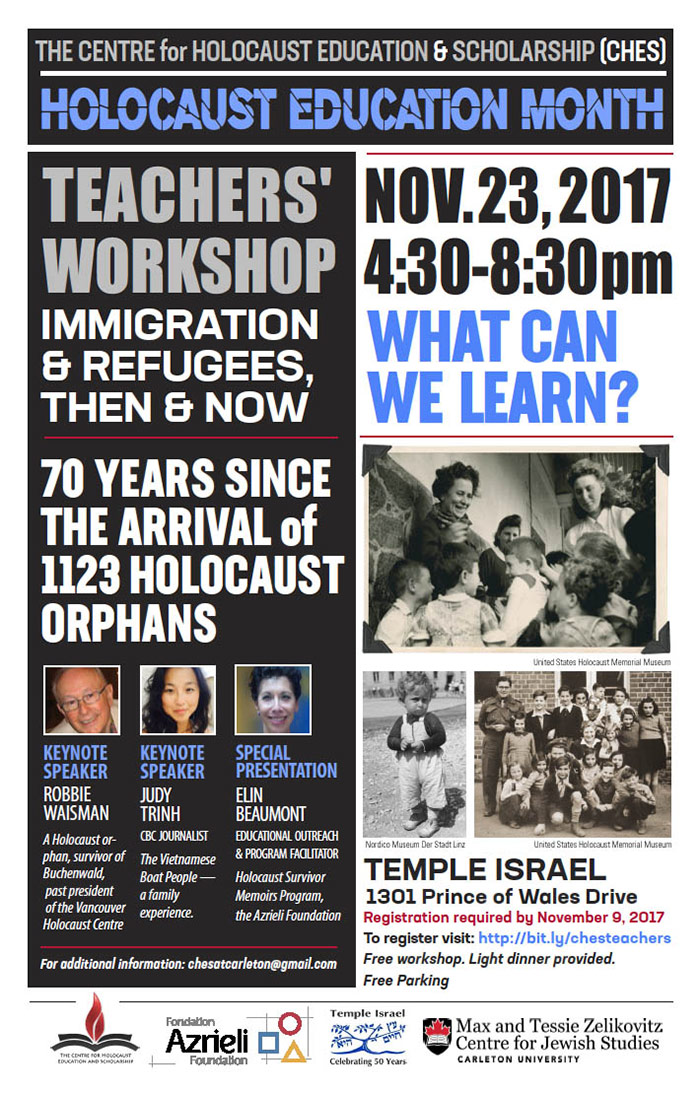 In Conversation with a Survivor – Judy Young Drache

Presented by the Centre for Holocaust Education and Scholarship, in cooperation with the Department of History, Carleton University.

Rescue in the Philippines

Rescue in the Philippines: Join us, along with a special guest from the Embassy of the Philippines, for a screening of a documentary that tells the story of how 1,200 Jews escaped the Nazis and immigrated to the Philippines with the help of an unlikely coalition: five cigar-making brothers from Cincinnati, Manuel Quezon, the charismatic first president of the Philippines, Paul McNutt, US High Commissioner, and an ambitious U.S. Army Colonel named Dwight Eisenhower. Light refreshments to follow.

Presented by the Jewish Federation of Ottawa in cooperation with the City of Ottawa and Embassy of the Philippines.

A Tribute to John Hirsch

Remembering John Hirsch in recognition of his contributions to Canadian Theatre on the 70th anniversary of his arrival to Canada as one of 1123 Holocaust orphans.

This special program, a tribute to Hirsch, will include excerpts from a one-man play entitled “Hirsch” created and written by Alon Nashman and Paul Thompson and performed by actor Alon Nashman. Included are also reminiscences and a roundtable discussion by Peter Herrndorf, CEO of the National Arts Centre, journalist Martin Knelman, actor Paul Thompson and others. MC for the evening: NAC Director of Communications Rosemary Thompson.

Archival material from the NAC and the Royal Manitoba Theatre Centre will be on display.

John Hirsh was born in Hungary and survived the Holocaust in Budapest. He arrived in Canada at the age of 17 in 1947, through the War Orphans Project of the Canadian Jewish Congress. He was adopted by Alex and Pauline Shack of Winnipeg. It was in Winnipeg that Hirsch started his theater career which included years as Head of Drama at the CBC and Director of the Stratford Festival. His love for the arts and creativity as a director quickly won him recognition in Canada and beyond.

Presented by the Centre for Holocaust Education and Scholarship in cooperation with the NAC. 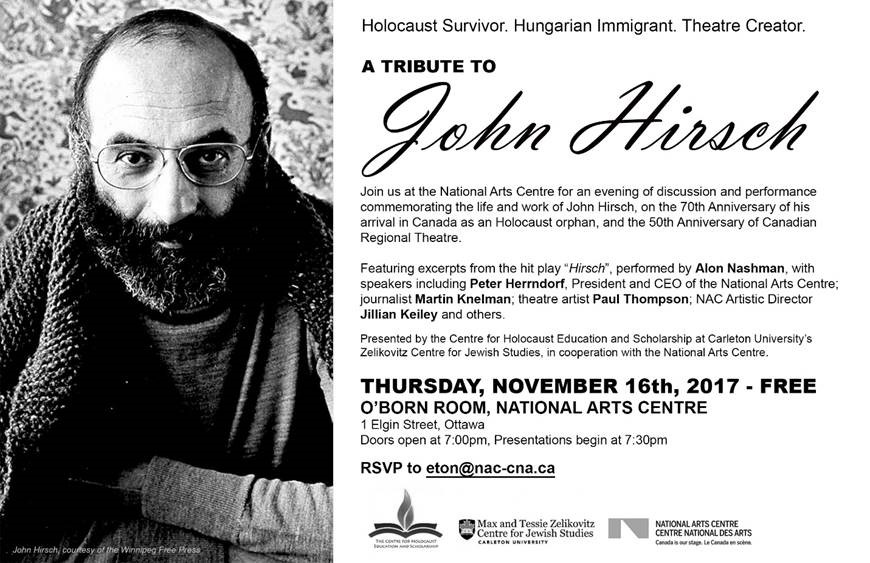 Descendants of Holocaust survivors Speak Out: Memory, Identity and Emerging Narratives. “I don’t speak because I have the power to speak, I speak because I cannot remain silent.” Rabbi A. I. Kooke.

The Forum includes diverse speakers with a broad range of experiences who will discuss topics that are of interest to descendants of Holocaust Survivors.

Without having lived through the events of the Holocaust, descendants of Holocaust survivors were affected by their parents’ experiences. As the number of our parents and grandparents who survived the Holocaust is dwindling, some of the questions that emerge for us are: how do we keep their stories of pain and suffering, survival and resilience alive? How do we tell their stories? In what ways have their stories shaped us?

Our five panelists, all descendants of Holocaust survivors, will share stories and memories that shaped their life choices, and why it is important for them to speak out and make a difference.

Presented by the Centre for Holocaust Education and Scholarship in cooperation with Kehillat Beth Israel Synagogue and the Azrieli Foundation. 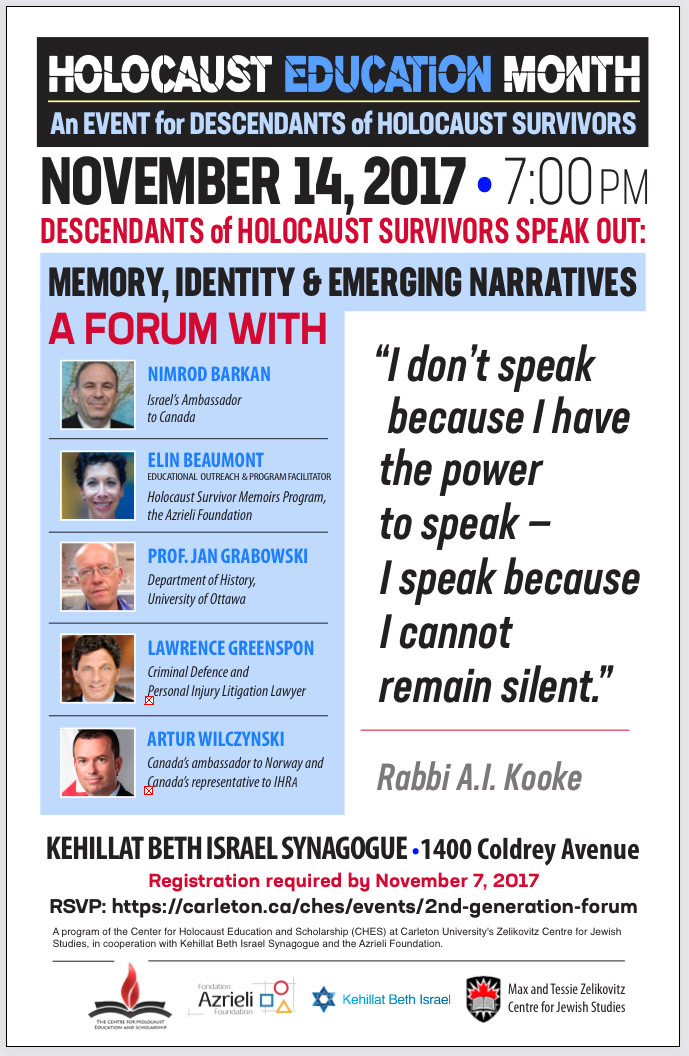 Date: November 10, 2017
Time: 10:00 AM
Location: Saint Paul University, Ottawa – Amphitheatre Room 1124
Open to the public. Graduate students and professors from institutions other than SPU are welcome.

Hosted by the Dean of the Faculty of Theology, St. Paul University.

Presented by the Centre for Holocaust Education and Scholarship in cooperation with the Embassy of the United States of America and Saint Paul University.

Keynote address: “From Destruction to Rebirth: The Return of Life in the Jewish DP Camps”

Dr. Avinoam Patt, Philip D Feltman Professor of Modern Jewish History and Associate Director at the Maurice Greenberg Centre for Judaic Studies, at the University of Hartford, Connecticut where he is also Director of the Museum of Jewish Civilization.

Kristallnacht, known as the Night of Broken Glass, a wave of violent attacks on Jewish stores, homes and synagogues (hence the shattered glass), took place across Nazi Germany and Austria on November 9 and 10, 1938, setting off an explosion of human destruction that was to become the Holocaust.

This year’s Kristallnacht memorial lecture will focus on hope and revival, under the theme of Immigration and Refugees: Then and Now. Dr. Avinoam Patt will discuss the revival of survivors’ lives after the Holocaust’s devastation, and reflect on the power of refugees, past and present, to recreate themselves given the right conditions—a topic that has not been explored in such depth before and is very relevant today. Descendants of survivors too will discover an important link to their parents’ survival experience in this presentation.

Presented by the Centre for Holocaust Education and Scholarship in cooperation with the Kehillat Beth Israel Synagogue, the Zelikovitz Centre for Jewish Studies at Carleton University, Embassy of the United States of America, Saint Paul University, and the University of Ottawa. 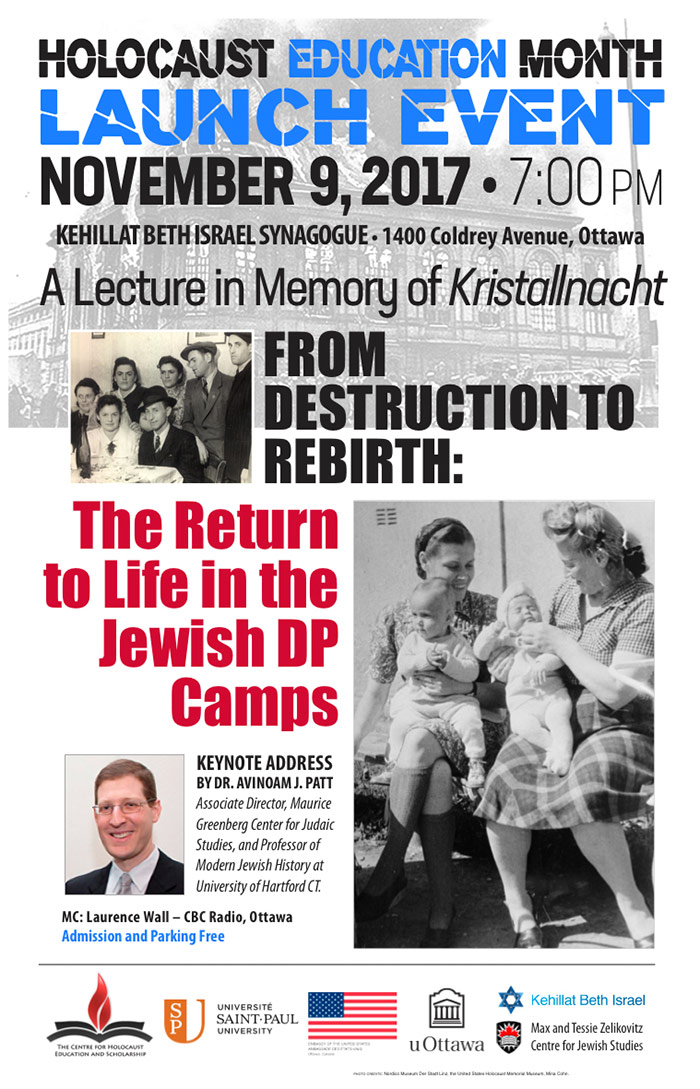 “The Jewish Heroes of Warsaw: The Afterlife of the Warsaw Ghetto Uprising”

Presented by the Centre for Holocaust Education and Scholarship in cooperation with the Embassy of the United States of America Department of History, and the University of Ottawa.

In Conversation with a Survivor: Dr. Rebecca Margolis will host survivor David Moskovic and screen his testimonial

The public is welcome. Please RSVP via chesatcarleton@gmail.com.

Presented in cooperation with the Vered Jewish Canadian Studies Program, University of Ottawa. 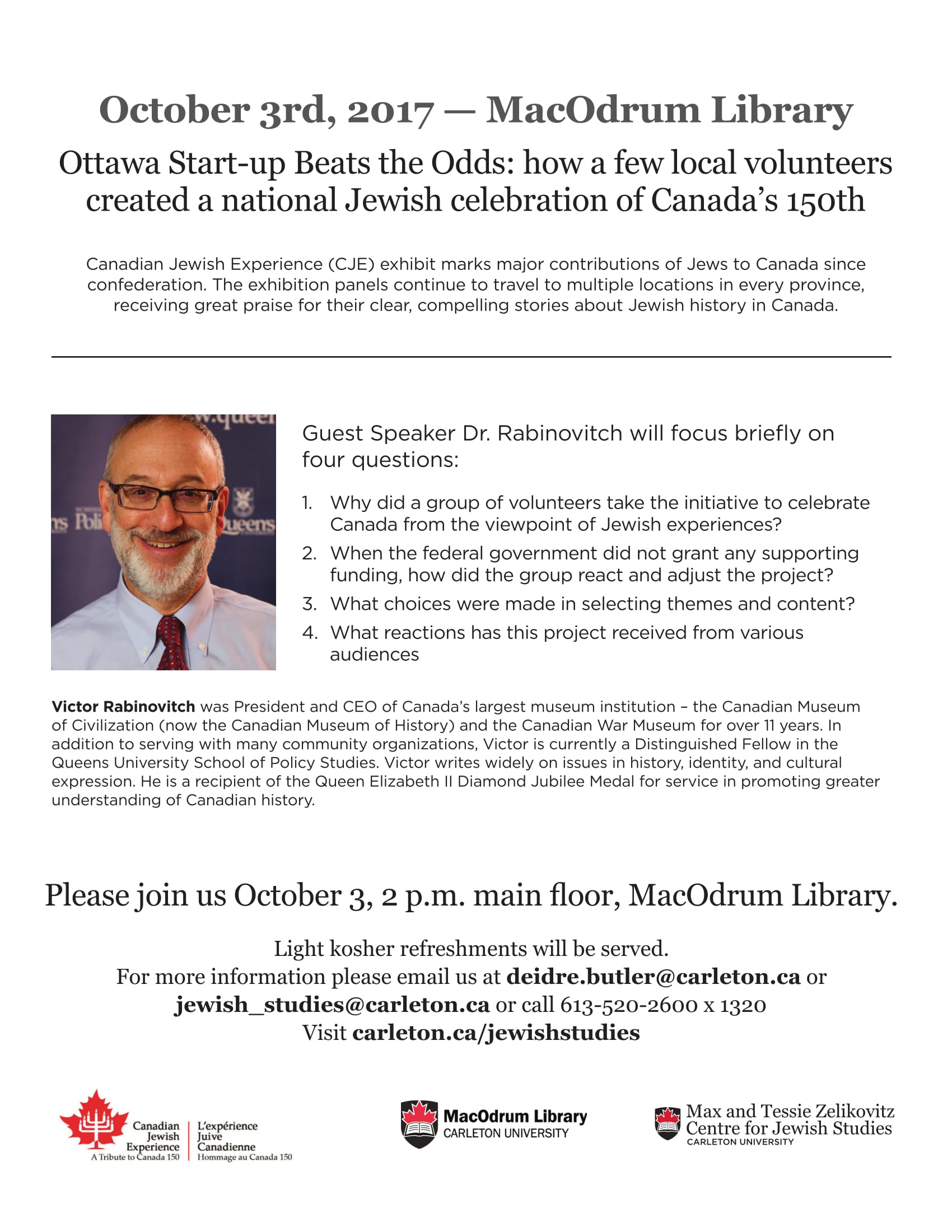 From Vision to Reality: An Event to Honour the Inauguration of the National Holocaust Monument

The event is sold out. 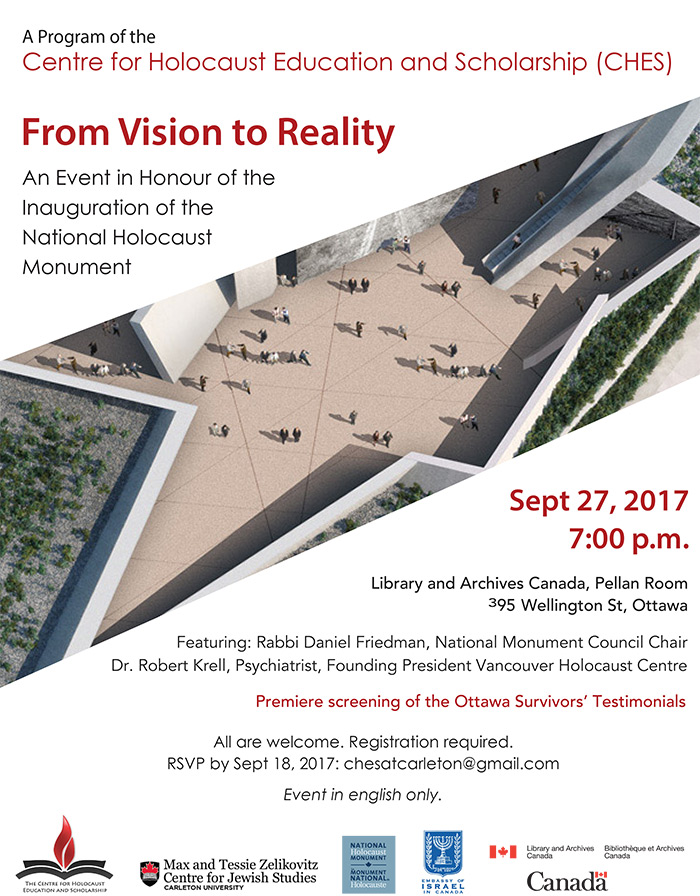 The Ambassadors of Change Program

This part of the event is for students.

This program is part of the National Holocaust Remembrance Day Ceremony and is open to grade 11 high school students. About 200 students from Ottawa, Toronto, and Montreal will meet and participate in the Ambassadors of Change Program. The program takes place prior to the national ceremony. During the Ambassadors of Change program, students will meet with Holocaust survivors, share thoughtful questions and ideas through guided discussions. Students will discuss the relevance of the Holocaust’s lessons in today’s world and suggest ways they can promote tolerance and inclusiveness in their own communities. The personal accounts of survivors and witnesses enables the new generation of Canadians to shape their multicultural identity and forge true Canadian values of equality, justice, democracy and respect of fundamental human and civil rights. For the second year in a row, CHES has recruited Ottawa area students for the Ambassador of Change Program. 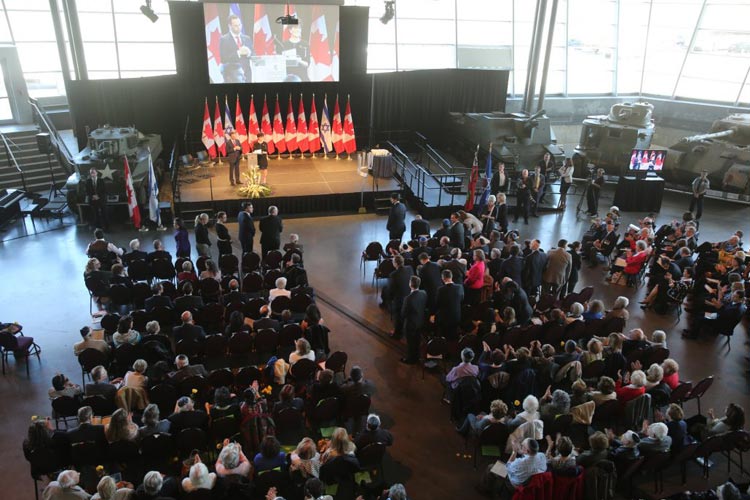 Open to the public.

The theme of the 2017 National Ceremony is “Survivor’s Testimonies: The Fate of the Individual during the Holocaust”. Individual testimonies enable us to enrich our knowledge of the Shoah and to grasp the historical truth. It allows us to learn from its lessons to foster Canadian multiculturalism. 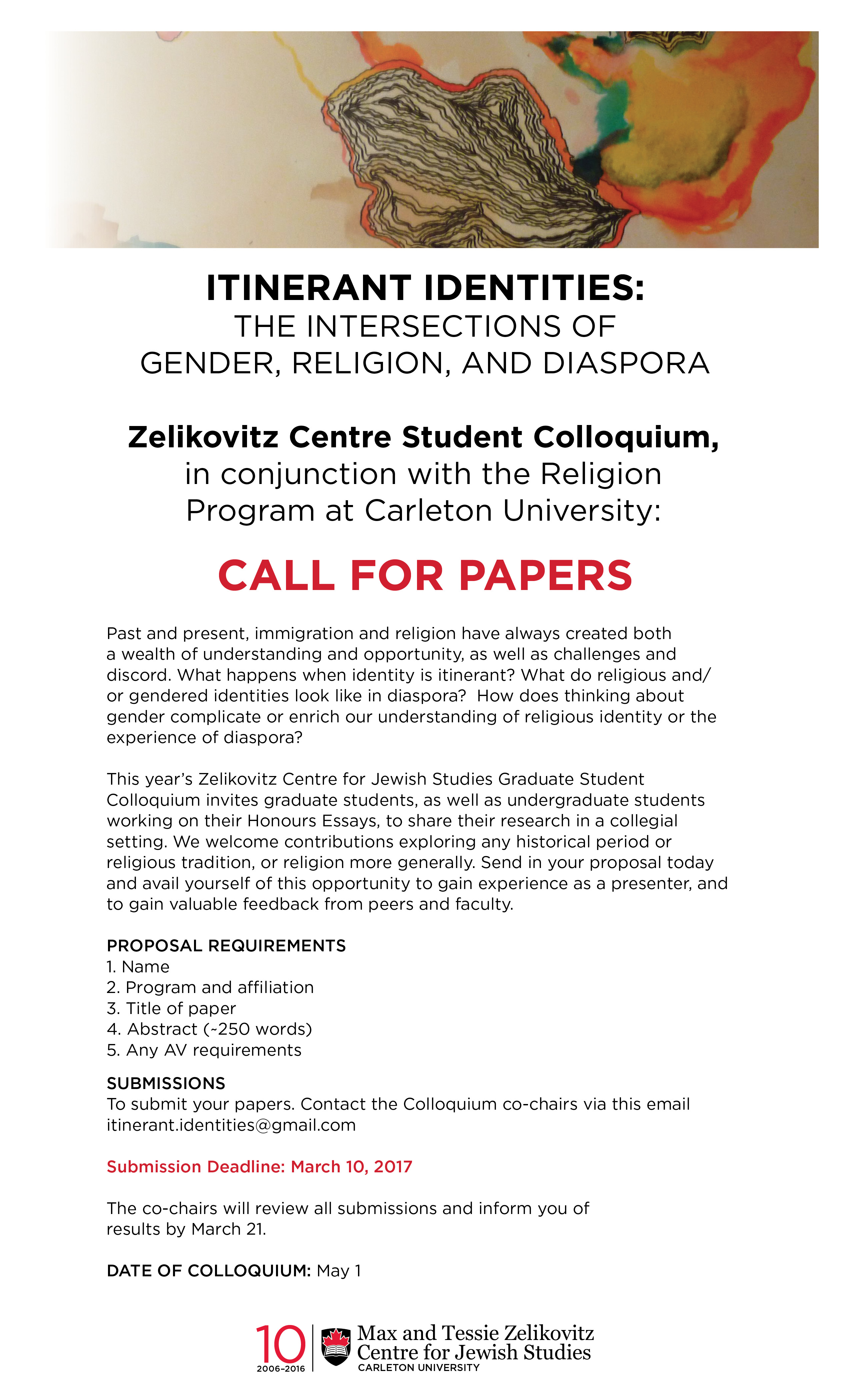 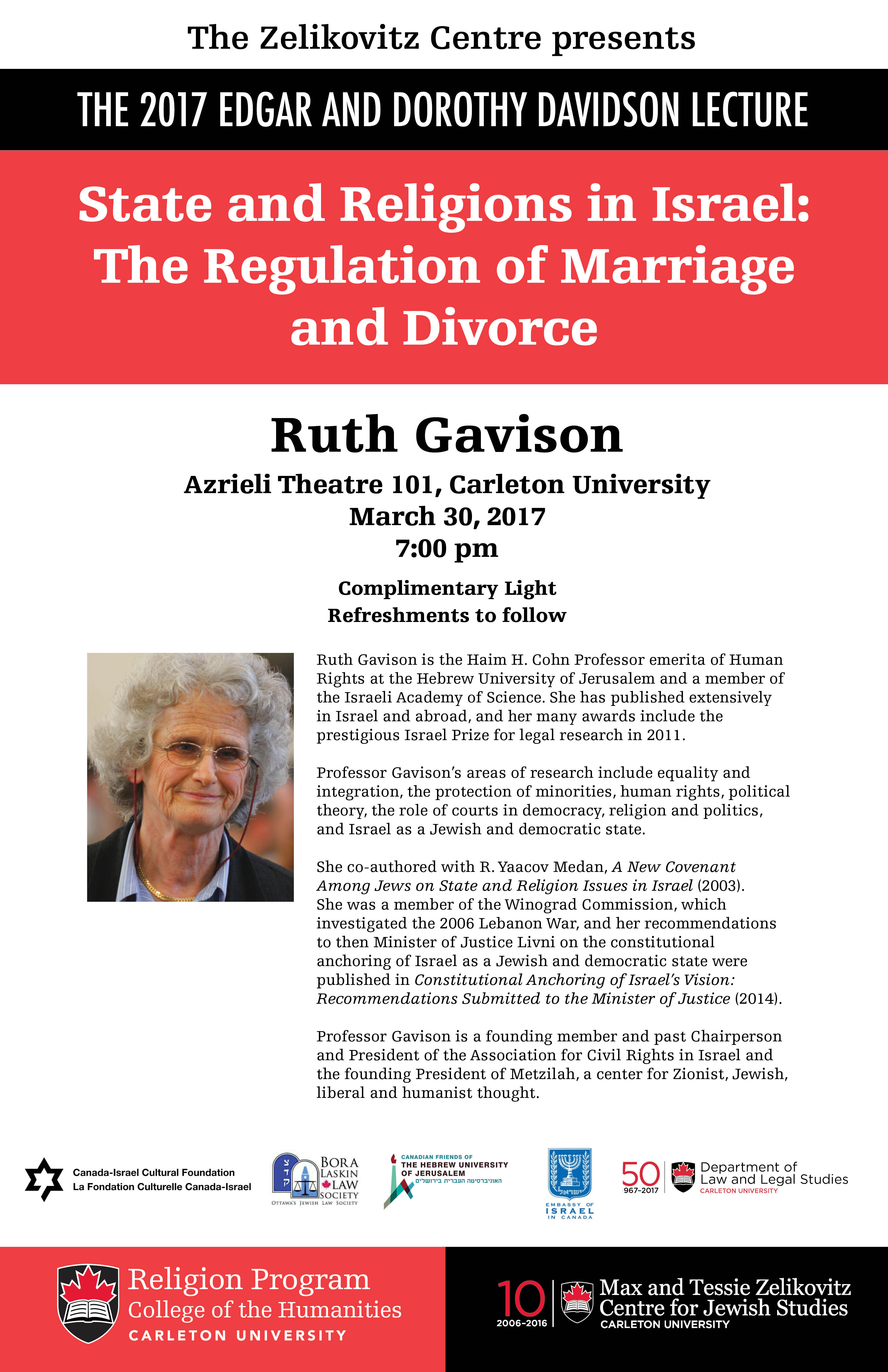 Bring Back the Laughter

This year’s Developing Future Leaders (DFL) interns are running a comedy night fundraiser for Shalom Bayit. Shalom Bayit offers confidential and anonymous support for women experiencing abuse, They offer many services, for example: domestic abuse counselling, emergency shelter, safety planning, and outreach. The funds raised through this event will go towards supporting Shalom Bayit and the work they do for our community.

Additionally, donations are welcome at www.gofundme.com/shalom-bayit-fundraiser. 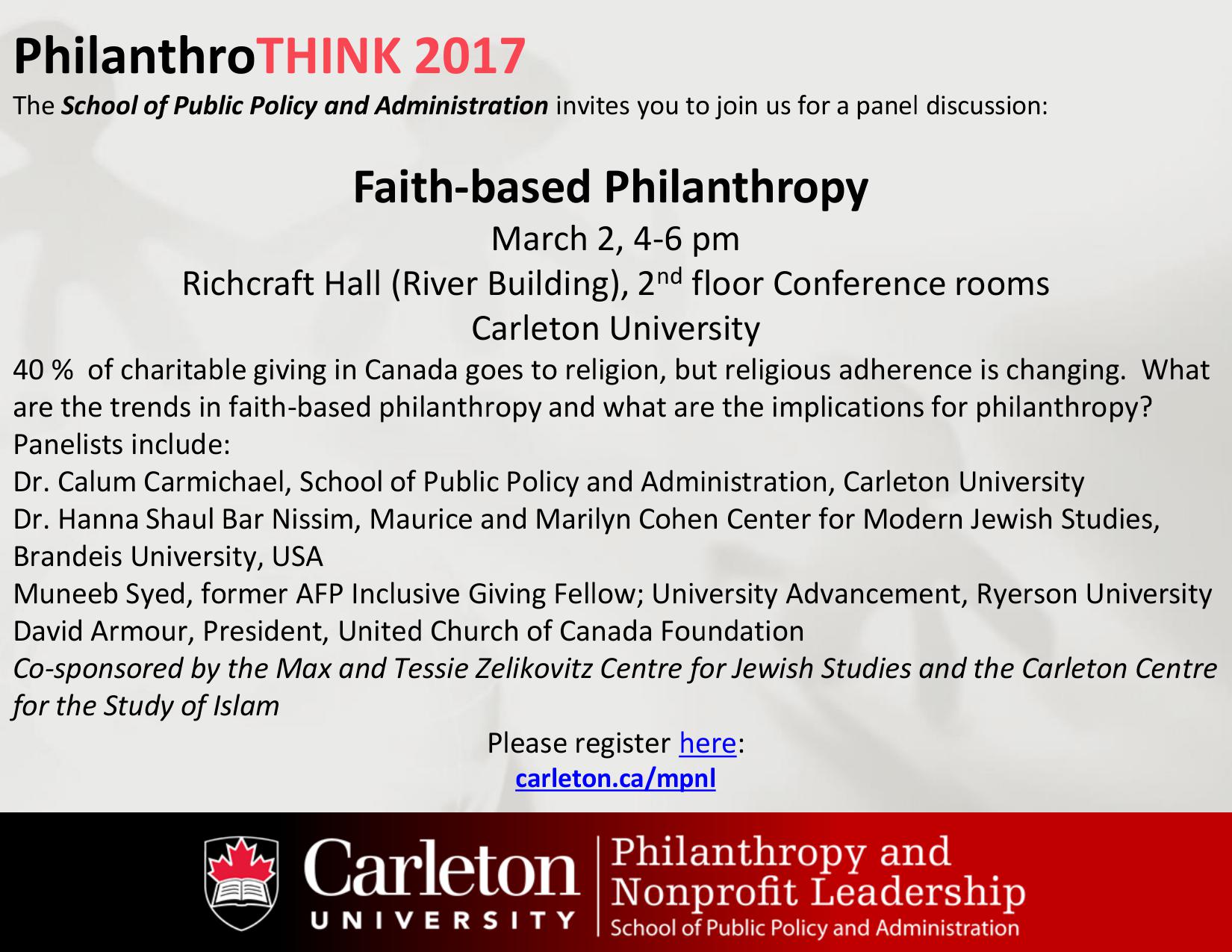 “Neither in Dark Speeches nor in Similitudes: Reflections and Refractions Between Canadian and American Jews” – Book Launch 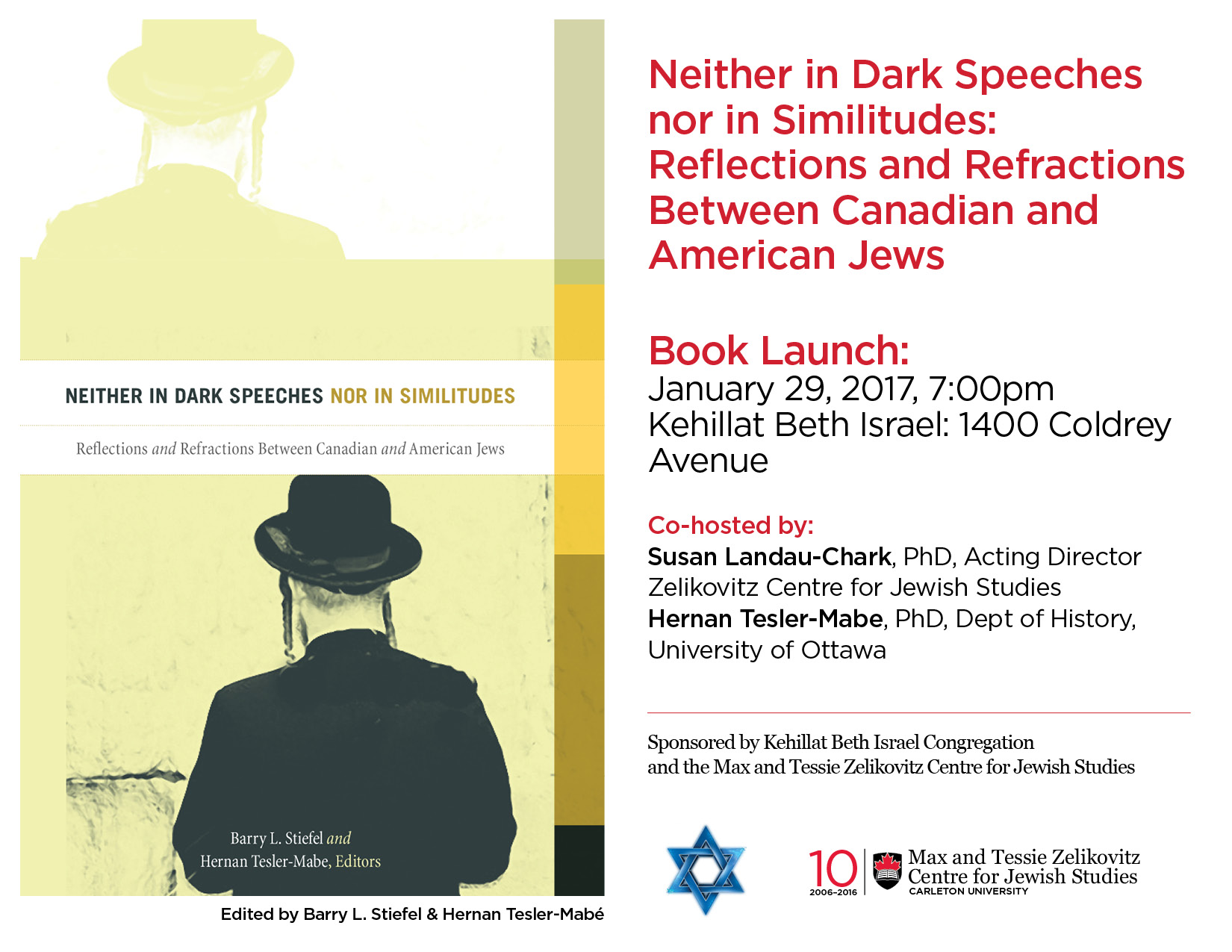 “We Remember” – A Memorial to Mark International Holocaust Remembrance Day

Together, let us remember those brutally murdered by the Nazi regime and join as one to reaffirm our collective commitment to ‘Never Again’.

We invite you to a memorial to mark International Holocaust Remembrance Day where we will pause to remember the millions of Holocaust victims and renew our commitment to speak out against antisemitism, hate and genocide. During the vigil, we will join with the World Jewish Congress in a global effort to make a unique and unforgettable statement that demonstrates that the six million Jews murdered in the Shoah remain in our hearts and in our collective memory.

Please join us at Ottawa City Hall to make history and be part of what we hope will be the largest organized global Holocaust commemoration ever.

“We Remember” is a global campaign to encourage millions of people to photograph themselves holding “We Remember” signs which they can upload to Facebook, Twitter, and Instagram with the hashtag #WeRemember.

Exhibit courtesy of the Romanian Chairmanship 2016. 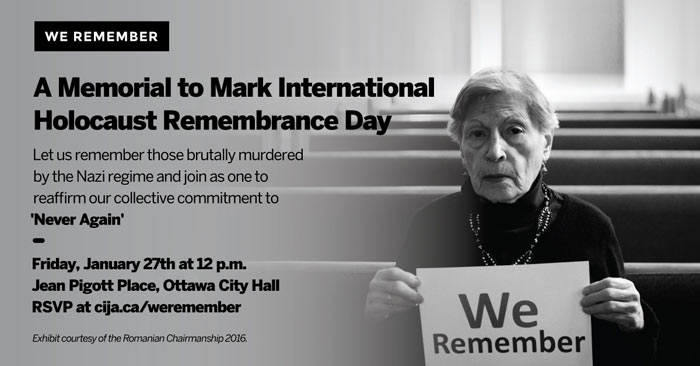