Hear Our Voices: Holocaust Survivors Share their Stories of Trauma and Hate is a bilingual online course that uses the voices of Holocaust survivors to educate students on the Holocaust and Antisemitism. Separated into four modules, Hear Our Voices incorporates a variety of historical evidence to contextualize survivor testimony including digitized maps, primary documents, timelines, and academic scholarship. The first module, “Oral History”, focuses on the uses of survivor testimony ranging from the Nuremberg Trials to the present. In the second module, “Gender and Sexuality”, students will investigate the depiction of gender and sexuality during the Holocaust. The third module, “Religion and Culture”, analyses Jewish, Christian, and Muslim responses to the Holocaust. Finally, the fourth module, “Antisemitism and Racism” will explore the different types of anti-Jewish attitudes and behaviours over time and assess how they contributed to the genocide against Europe’s Jewish populations. These modules work together to offer a contextualized learning experience of the Holocaust while highlighting what is at the core of this project, the survivor’s stories.

We are pleased to share project trailer links, in English and French, demonstrating a sneak peak of the online course.

Below is a video of excerpts from oral history interviews with Holocaust survivors, members of the second generation and families of righteous gentiles. These interviews were conducted through the Hear Our Voices e-campus Ontario project at Carleton University.

Annette Wildgoose knew her mother was different than other mothers.  Listen to a story of the second generation, learning her mother’s history as a passenger on the St-Louis escaping Nazi Germany, and gaining the knowledge and skills to speak her mother’s story.

Thomas Paul tells a different type of Holocaust story, one that begins with his father, a US soldier who liberated the Gunskirchen lager in Austria. Hear him connect his father’s memory of that horror with his own experiences as a soldier in Vietnam and how that shapes his own ministry as a pastor.

Josef Eisinger was one of the oldest boys to survive by being sent on the Kindertransport from Nazi occupied territories to England, internment in Canada and ultimately serving in the Canadian army, training infantry soldiers to fight the Nazis.

This interactive map of Josef and Lesley’s emigration journey was created by Nicola Woodhead, a PhD candidate in History at the Parkes Institute at the University of Southampton, UK (above and in the link below). Her doctoral dissertation seeks to provide the first comprehensive examination of transmigrant Kinder—the Kinder who did not permanently settle in Great Britain—by mapping both the experience of transmigrant Kinder and the memory of these experiences.

To effectively use this map, press on the menu button on the top left. You will then be able to scroll down and see Josef and Lesley’s journey in the form of a list. Click on the different icons to discover pictures from their lives and a few clips from Josef’s oral history.

Tom Deri was a boy when his father was sent to a labour camp and his family went into hiding in Budapest.  From the war years, through the Hungarian revolution and immigrating to Canada, Tom tells the story of how the Holocaust shaped a family’s destiny.

Bryna Wallace and Lisa Cohen, mother and daughter, share a tangle of family memories of the war, told over generations.  Bryna’s father led his young bride, extended family and neighbours into the forest.  65 Jews fled into the forest and 66 came out, the 66th being baby Bryna.

Lisa Cohen and Bryna Wallace share a tangle of family memories of the war, told over generations. Hear Lisa share how her family’s history shaped her values and identity.

Susan Bloomfield’s family had a menorah but wasn’t Jewish.  Hear how her great uncle’s family hid a Jewish family in their attic in the Netherlands through the end of the war and how those stories, and the family’s menorah, came to Canada.

The March of the Living

The Centre for Holocaust Education and Scholarship 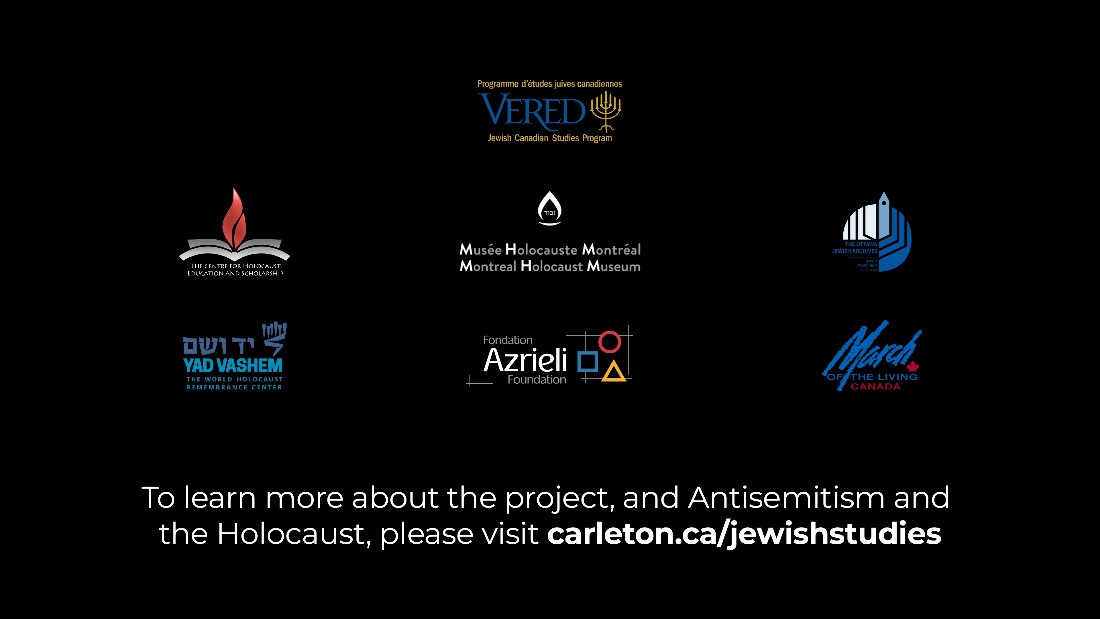