Below is a listing of all Zelikovitz Centre events that occurred in 2018.

Teachers’ Workshop: Exploring the Complexities of Kristallnacht in your classroom

Leora Schaefer directs the Canadian program of Facing History and Ourselves (FHAO), facilitating professional development for educators on teaching practice and pedagogy. Leora works with all levels of education, from Ministries of Education to School boards and schools across the country.

Presented by the Centre for Holocaust Education and Scholarship in cooperation with Facing History and Ourselves. 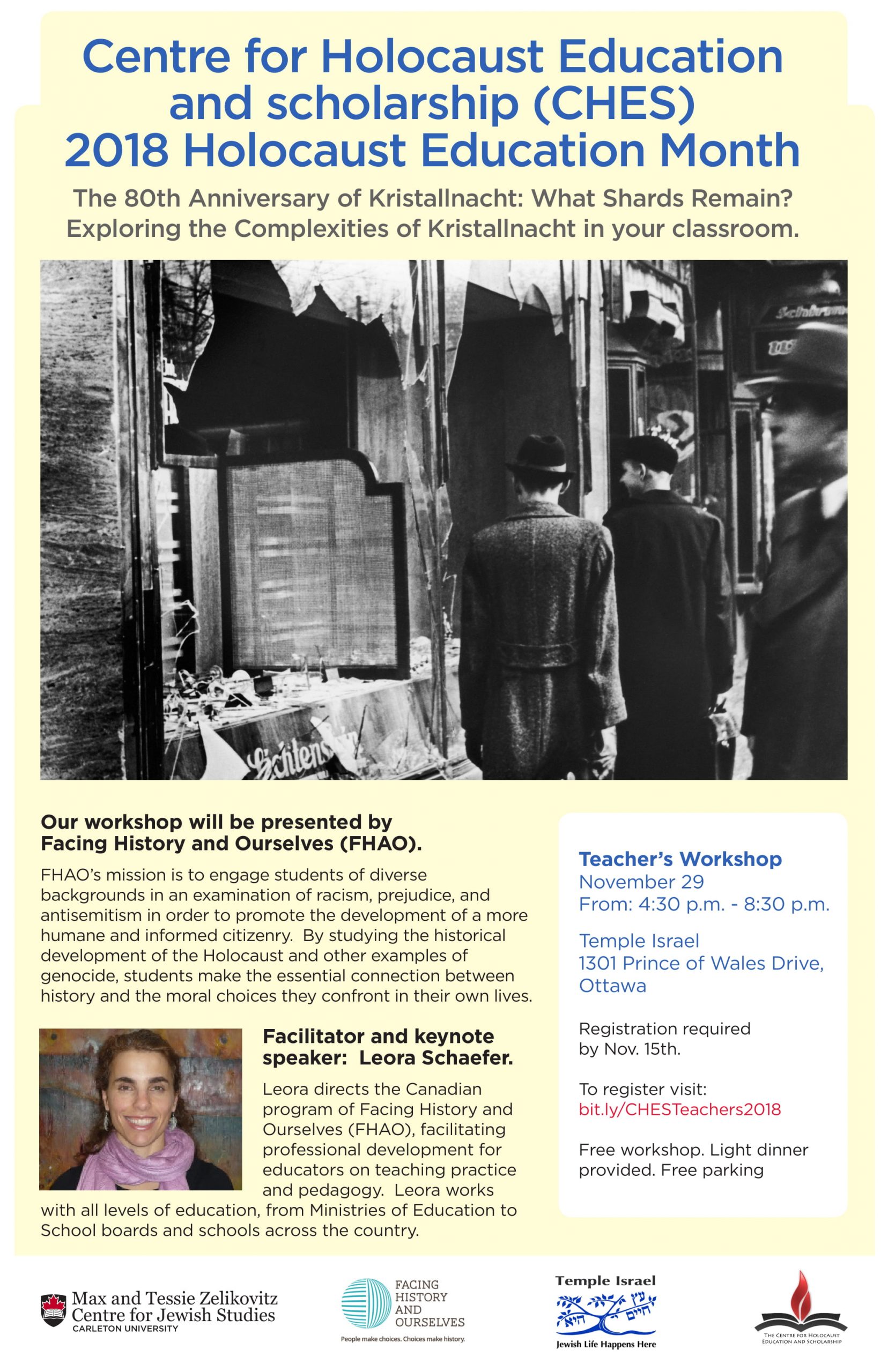 “Kristallnacht: An After History” with Dr. Helmut Walser Smith

The November Pogrom of 1938, the Night of Broken Glass, was one of the decisive moments of the history of the Third Reich. For the first time, tens of thousands of ordinary people, if not more, participated in a ritual of violence and degradation directed against their Jewish neighbors. In more than a thousand communities, synagogues were burned down, destroyed, and desecrated. Historians know a great deal about the event. They know less about how this event became part of collective memory in the postwar years. Using method from digital humanities, this talk will address the question of when and how Germans in the Federal Republic thought about and memorialized a central event that had shown Nazi Germany to be a persecuting society. 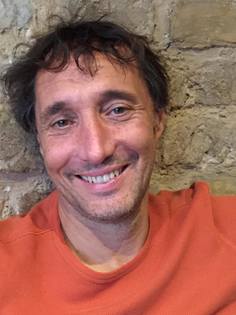 Helmut Walser Smith (Yale, Ph.D., 1992) is the Martha Rivers Ingram Professor of History and Director of the Digital Humanities Center at VanderbiltUniversity. He is the author of German Nationalism and Religious Conflict, 1870-1914 (Princeton, 1995) and four edited volumes, including The Oxford Handbook of Modern German History(Oxford, 2011), His book, The Butcher’s Tale: Murder and Anti-Semitism in a German Town (New York, 2002), received the Fraenkel Prize in Contemporary History, was an L.A. Times Non-Fiction Book of the Year, and has been translated into French, Dutch, Polish, and German, where it received an accolade as one of the three most innovative works of history published in 2002. Smith has also authored The Continuities of German History: Nation, Religion, and Race across the Long Nineteenth Century (Cambridge University Press, 2008) and is presently working on a book, supported by a Guggenheim Fellowship and scheduled to appear with W.W. Norton and C.H. Beck (in translation) in 2019, tentatively entitled “Our Modern Germany.” A New History of Nation and Nationalism, 1500-2000.

Presented with the support of the History Department, EURUS, the Zelikovitz Centre and the Centre for Holocaust Education and Scholarship (CHES). 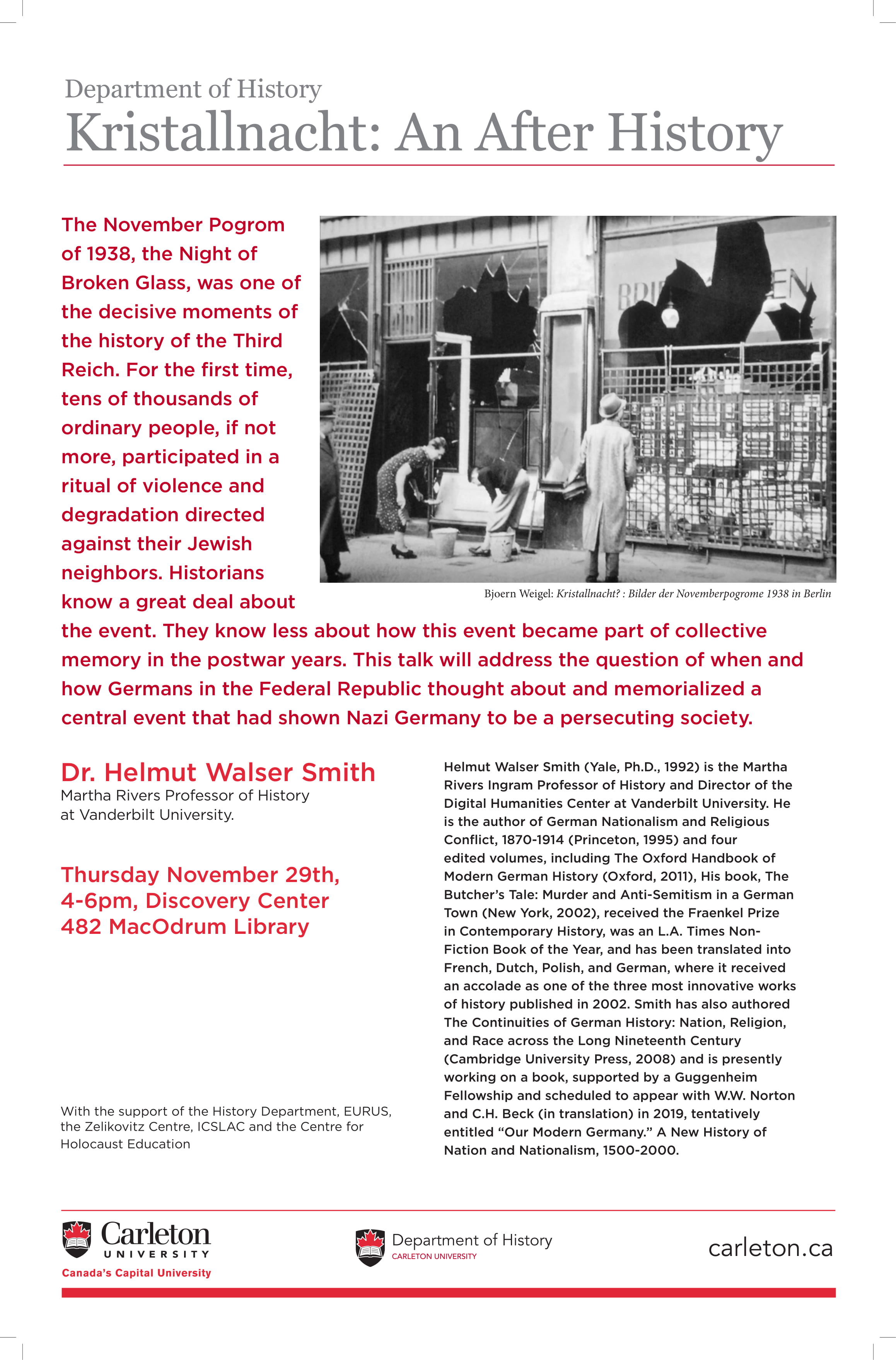 March of the Living (MOL) Ottawa is collaborating with The Centre for Holocaust Education and Scholarship (CHES) on a joint project. The project includes meetings of 11 MOL alumni with local survivors to hear the survivors’ stories and to share the MOL students’ experiences. The project includes the survivor testimonials filmed by CHES in 2016. The outcome of the project: the survivors and the MOL students will together develop and then present a lesson in Holocaust Education at the students’ schools.

Lecture – Dr. Robert Ehrenreich (for students of the Zelikovitz Centre) 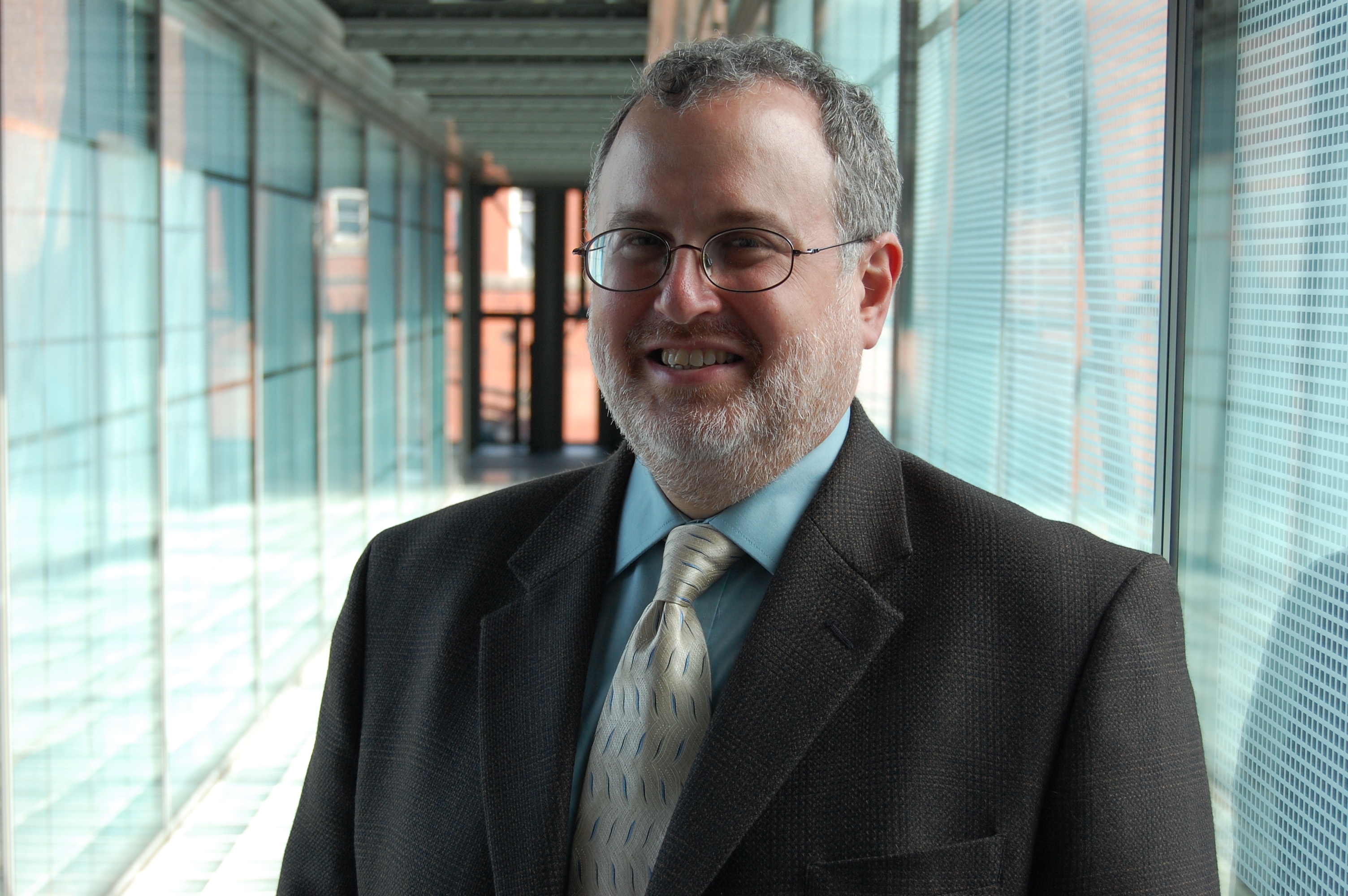 Date: Thursday, November 8, 2018
Time: 11:30 AM – 2:30 PM
Location: Carleton University
Cost: Free, but open only to registered students of the Zelikovitz Centre for Jewish Studies (not open to the public)

November 9th, 2018 marks exactly 80 years since the occurrence of Kristallnacht, the infamous Night of Broken Glass. This terrible evening saw the destruction of many Jewish businesses and synagogues throughout Germany and Austria and paved the way for the crescendo of events that would eventually culminate in the Holocaust. In our current climate of increasing intolerance and bigotry it is more important than ever that we learn the lessons of history so that no such genocides are permitted to recur.

Keynote address by Dr. Michael Berenbaum, one of the founders of the Holocaust Memorial Museum in Washington. Dr Berenbaum will examine Kristallnacht: The End of the Beginning and the Beginning of the End.

Of special interest this year is the inclusion of a concert performed by Niv Ashkenazi, a classical violinist, on a violin that was miraculously salvaged from the ashes of Holocaust and lovingly refurbished by Amnon Weinstein in Israel. This “Violin of Hope” will pay tribute to the six million whose voices were silenced forever. Our community will be the first in Canada to host such a concert.

Please read The Glebe Report’s article “Violins of Hope: reclaiming a lost heritage” to learn more about Mr. Ashkenazi and his prized violin.

Presented by the Centre for Holocaust Education and Scholarship in cooperation with Kehillat Beth Israel Synagogue. 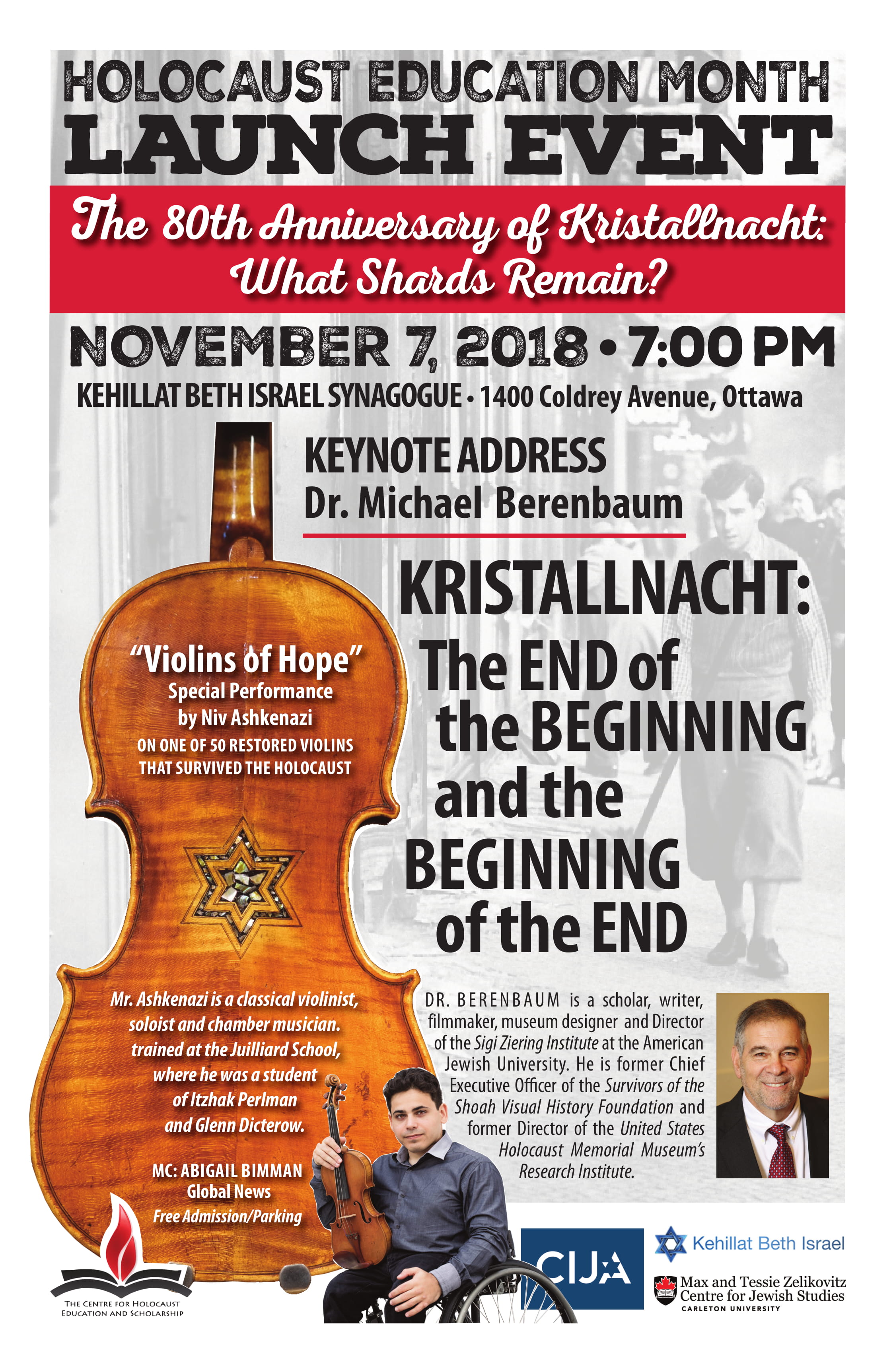 Susan Landau-Chark of the Zelikovitz Centre at Carleton University will review and lead a discussion about The Book Smugglers: Partisans, Poets, and the Race to Save Jewish Treasures from the Nazis.

Six million Jews were murdered during the Holocaust. The number is staggering. It is the equivalent of almost seven Ottawas. How can we represent the magnitude of this crime without reducing the victims to mere numbers? How can we show, as Holocaust survivor Abel Herzberg said so well, that “There were not six million Jews murdered; there was one murder, six million times”? How do we convey that these were real people with real lives and families. In this presentation, I will discuss how personal items can turn the huge numbers of victims back into individuals and return their humanity, based on three case-studies: personal items discovered near shooting pits in Ukraine; damaged photographs from Poland; and a piece of mica from the Theresienstadt Glimmerwerke (mica works).

Robert M. Ehrenreich is Director of National Academic Programs at the United States Holocaust Memorial Museum. Prior to joining the Museum, Dr. Ehrenreich was a postdoctoral fellow at the Smithsonian Institution; a research associate at the University of Illinois, Urbana; a senior staff scientist at The National Academies; and an associate research professor at George Washington University. He is the author or editor of four books, an international journal, and over 30 articles and reviews on the Holocaust, Holocaust studies, and European history and prehistory. He is also on the Board of Directors of the Ultimate History Project, an advisor to the WAVE Trauma Centre in Northern Ireland, and an External Examiner for Queen’s University, Belfast. Dr. Ehrenreich was awarded an A.B. from Harvard University and a D.Phil. from Oxford University. 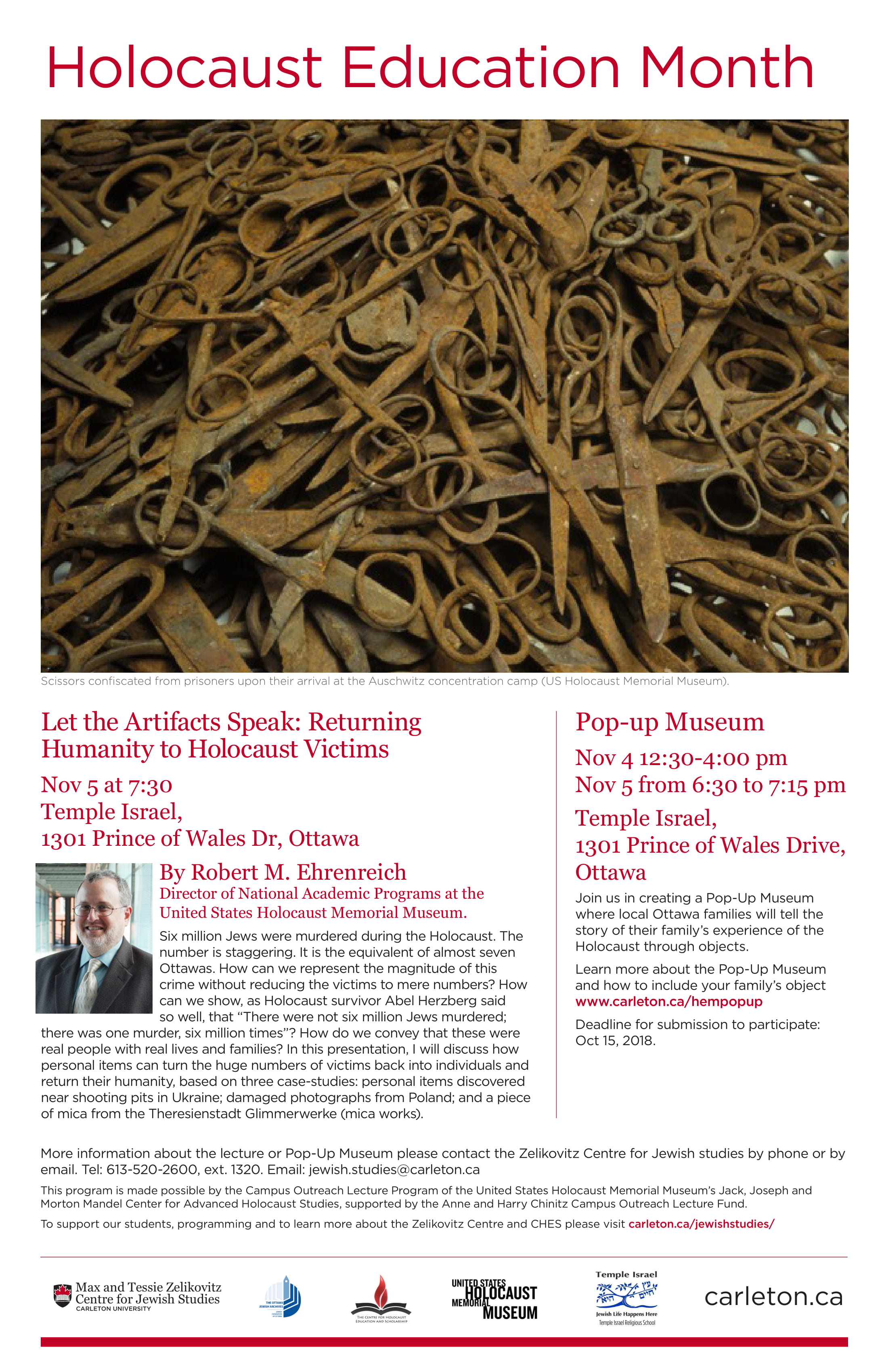 In honour of Holocaust Education Month, the “Pop up Museum” will display Holocaust artefacts brought in by community members with explanations provided by Dr. Robert Ehrenreich of USHMM.

A program of the Zelikovitz Centre for Jewish Studies and Temple Israel in cooperation with the Centre for Holocaust Education and Scholarship.

October 28th: Continuation of the conference Canadian Holocaust Literature: Charting the Field with panels and discussion on a range of literary works by Canadian Jewish authors, including children’s literature and comics with presenters from across Canada.

Details of the event can be found here.

Organized by Rebecca Margolis and Seymour Mayne from the University of Ottawa and Ruth Panofsky from Ryerson University. In partnership with Library and Archives Canada, the Association for Canadian Jewish Studies, the Centre for Holocaust Education and Scholarship (CHES).

In Conversation with Jeanne Beker

Discover the many lives of Jeanne Beker, popular media personality, fashion maven, author and descendant of Holocaust survivors as she talks with Jody Spiegel, Director of the Azrieli Foundation’s Holocaust Memoirs Program.

Each guest will receive an autographed copy of Joy Runs Deeper, the memoir of Ms. Beker’s parents, published by the Azrieli Foundation. 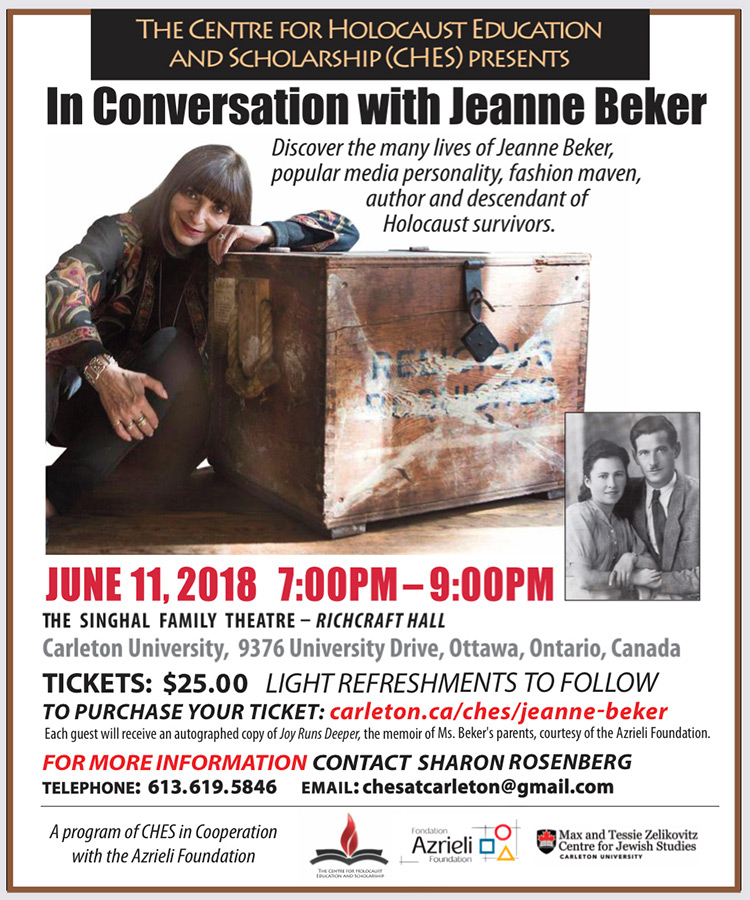 First-Hand Testimony of the Holocaust: An Evening with Survivor David Moskovic

Experience the moving story of Czech-born Holocaust survivor David Moskovic through video testimonial, followed by a talk on “The Enduring Importance of Eyewitness Accounts” by Professor Jennifer Evans and a Q&A session with Mr. Moskovic and Professor Evans.

In this moving presentation, the Centre for Holocaust Education & Scholarship (CHES) will screen a 30-minute video testimonial featuring Ottawa resident David Moskovic. In the late 1930s, the fates of Moskovic and his family were sealed when the Nazis came to power and the world turned a blind eye to the gathering storm. The family was ultimately sent to Auschwitz, where most of them perished. With unflinching clarity, Moskovic describes life before, during and after the Holocaust—a story reflecting the fate of millions who might have been saved if countries like ours had taken steps to welcome them.

The film will be followed by a short talk on “The Enduring Importance of Eyewitness Accounts” by Professor Jennifer Evans and a Q&A session with Mr. Moskovic and Professor Evans.

Read a CIJA article on this event: Ottawa Resident Documentary Film to be Featured at Ship of Fate Special Event 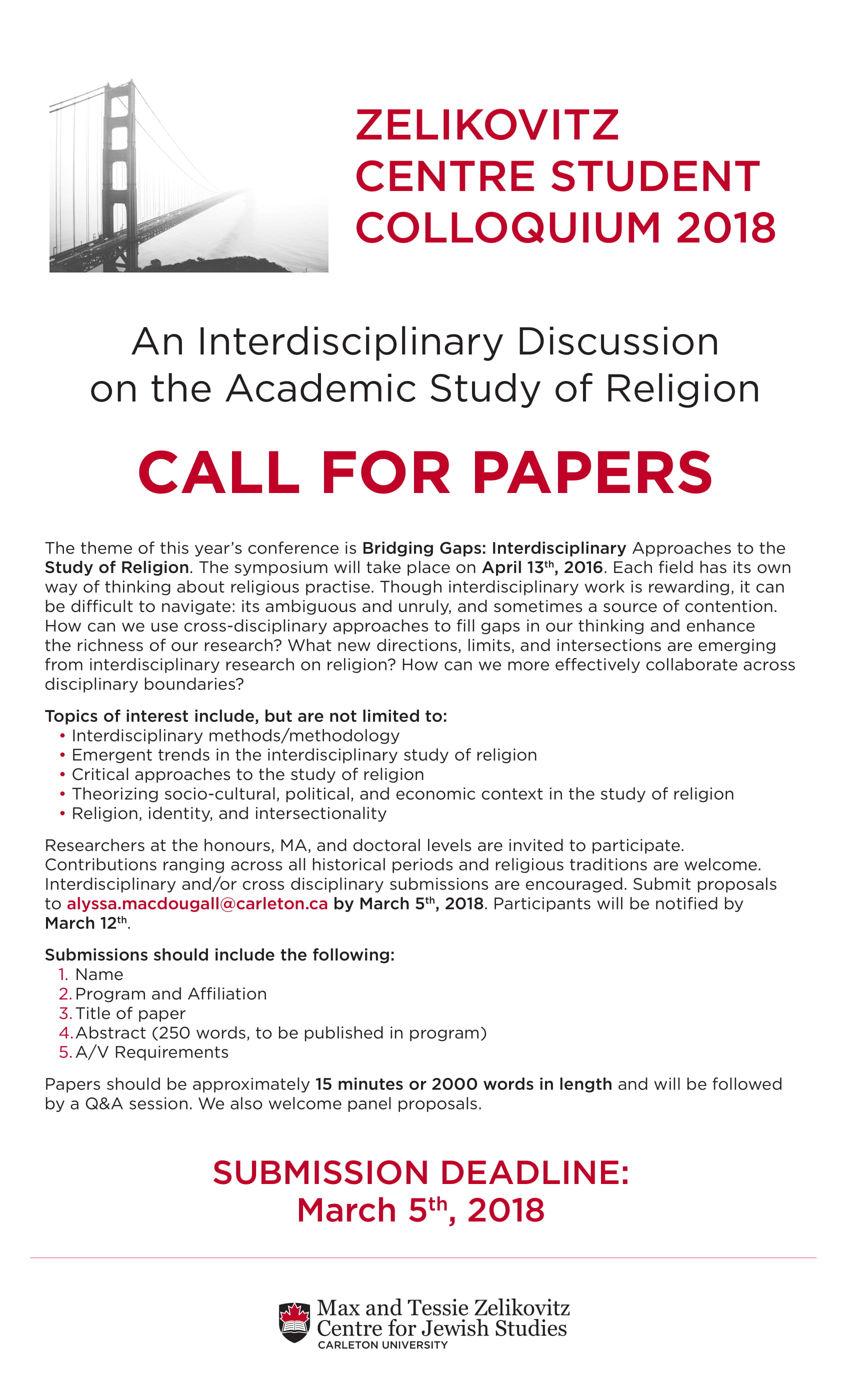 Fleeing Nazi persecution in 1939, more than 900 Jewish refugees boarded the German ocean liner St. Louis. They expected to find a safe haven across the Atlantic — instead, they were denied entry to Cuba, then the United States and, finally, Canada. The exiles returned to Europe, where many were killed in the Holocaust. Through photographs, texts and audiovisual materials, St. Louis – Ship of Fate explores the circumstances that led to this human rights tragedy, including the rise of Nazism, international indifference to the plight of refugees, and the dark history of Canadian immigration and anti-Semitism during the 1930s.

A travelling exhibition produced by the Maritime Museum of the Atlantic, a part of the Nova Scotia Museum, in collaboration with the Atlantic Jewish Council and Immigration, Refugees and Citizenship Canada. 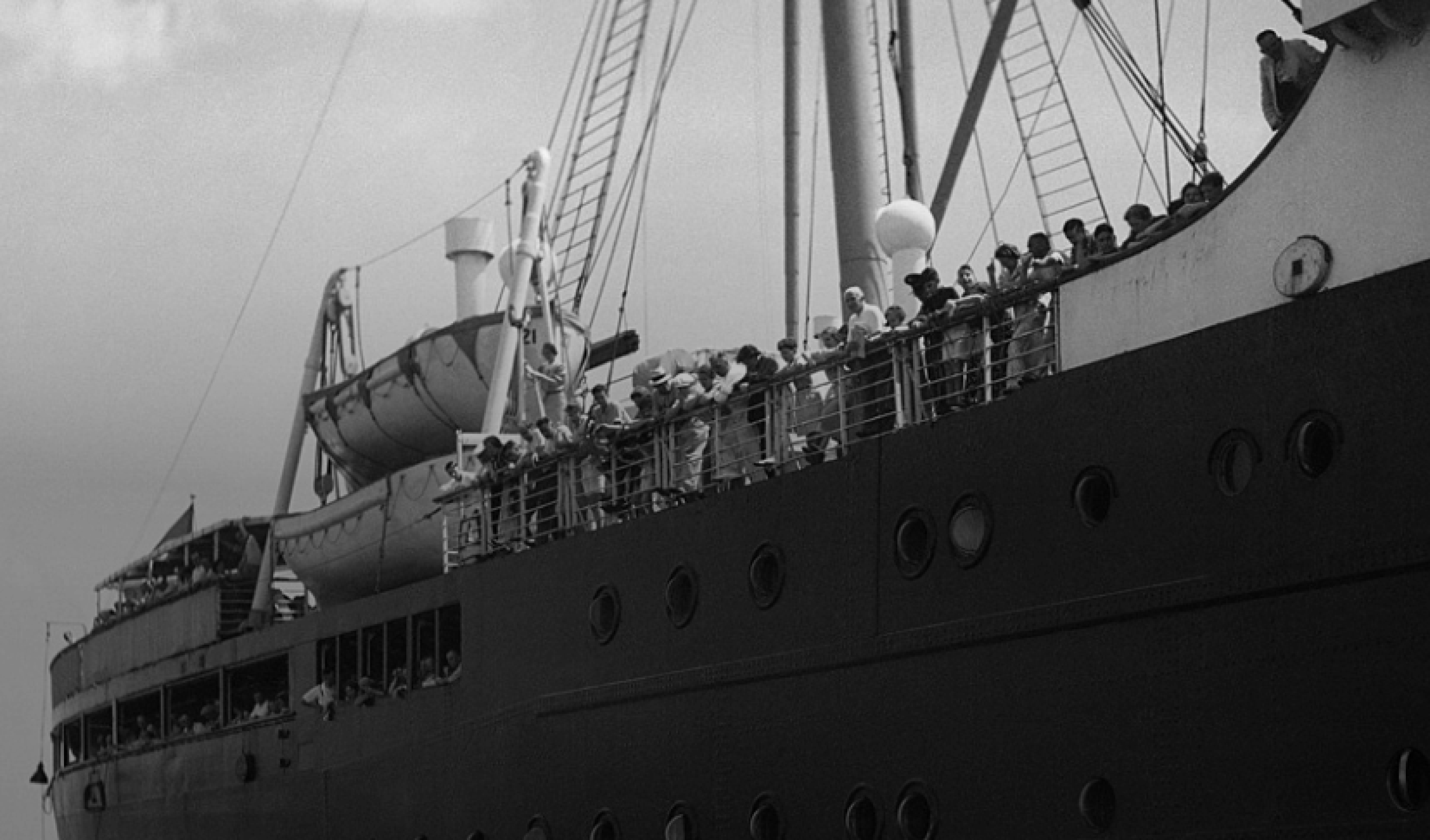 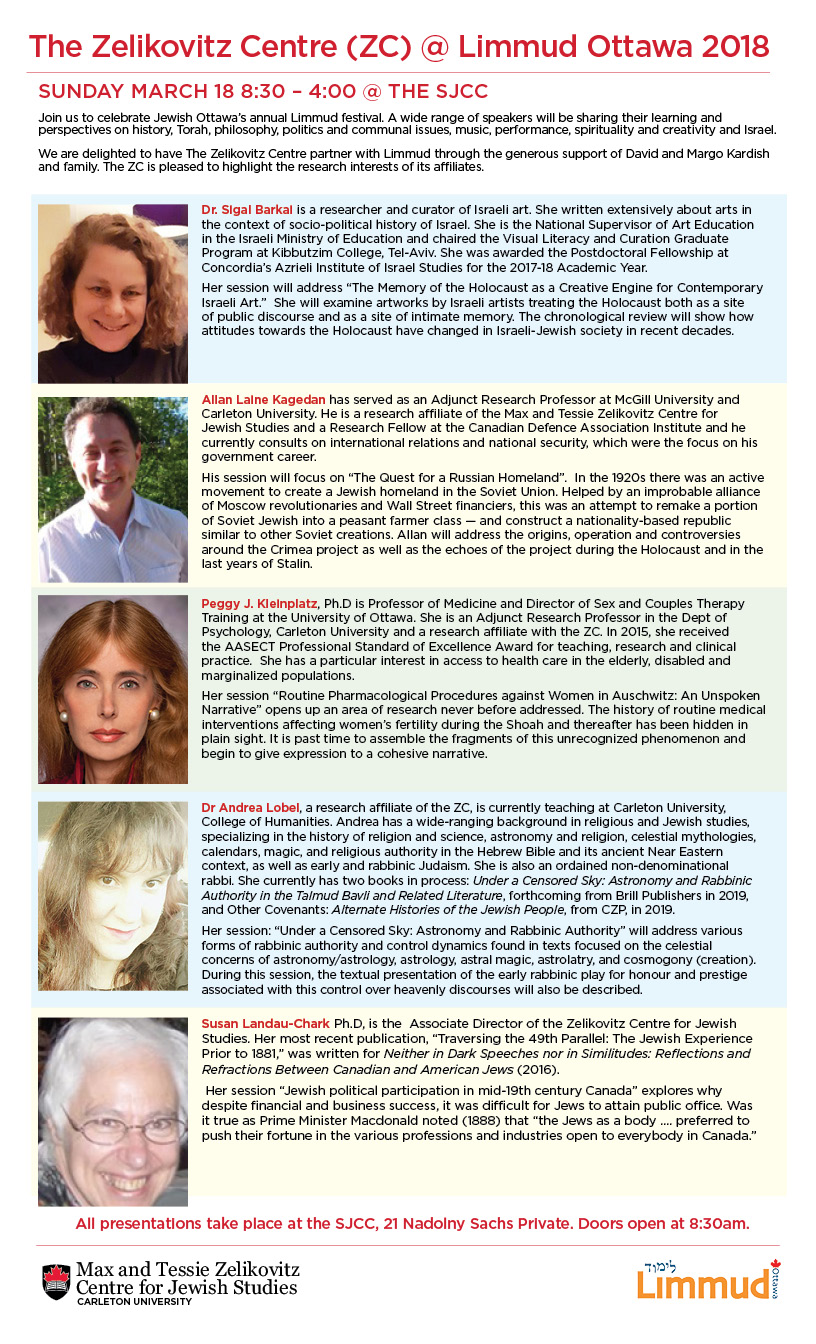 Public Lecture – Carol Meyers: Holy Land Archaeology: Where the Past Meets the Present 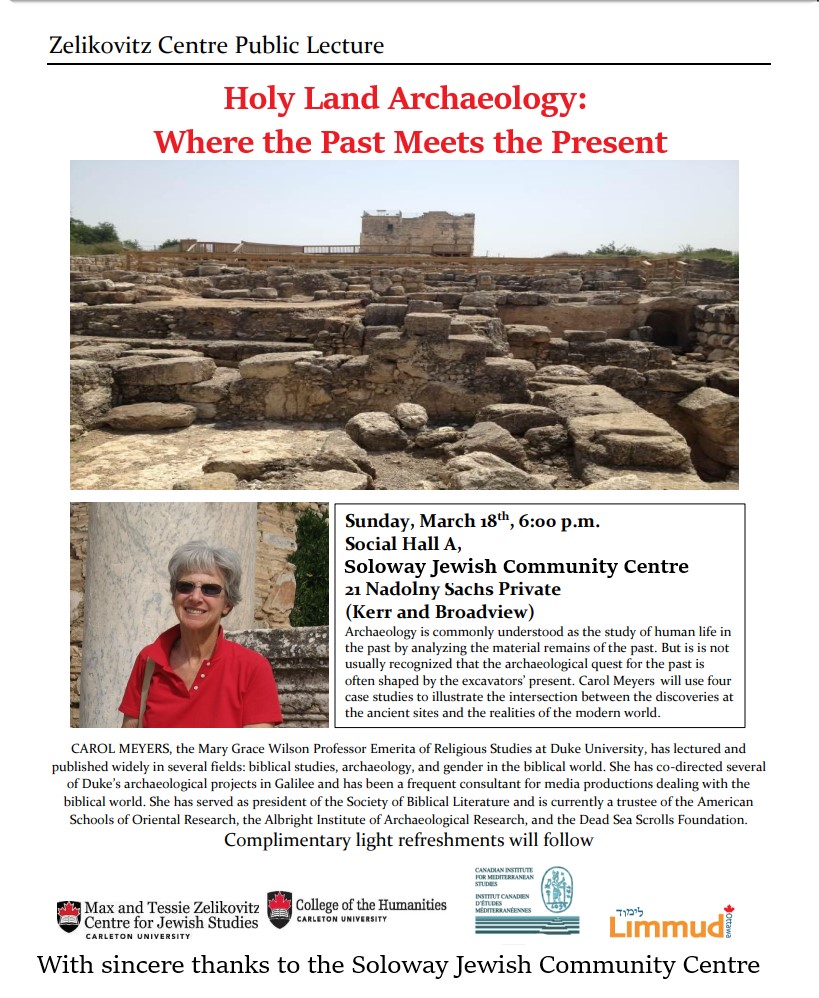 Julius Rosenwald: The Amazing Story of Jewish Values in Action “Together, let us remember those brutally murdered by the Nazi regime and join as one to reaffirm our collective commitment to ‘Never Again’.”

In Honor of International Holocaust Remembrance Day in Ottawa, Mayor Watson presented a Proclamation of the Day. The Mayor Proclaimed January 27th as International Holocaust Remembrance Day in Ottawa and urged all citizen of Ottawa to commemorate this day to honor all victims of the Nazis. This is the first time such a proclamation is made in Ottawa. With anti-Semitism on the raise, the Mayor’s Proclamation is clearly very meaningful and special. Annette Wildgoose, a CHES committee member and a child of a survivor from Germany, accepted the Proclamation at the event on behalf of CHES and all partners.

Read a CIJA article on this event: Mayor Watson Presents a Proclamation