Below is a listing of Zelikovitz Centre events that occurred in 2019.

Symposium for Descendants of Holocaust Survivors – 80 years since the beginning of WWII.

“Learning from the Past for the Future”

Lunch will be included.

Open to descendants of Holocaust survivors.

Moderator: Artur Wilczynski, Director General of the Communications Security Establishment, and former Head of Canada’s Delegation to the International Holocaust Remembrance Alliance (IHRA) when he was Canada’s Ambassador to Norway.

Dr. Natalia Aleksiun
Dr. Natalia Aleksiun is the Professor of Modern Jewish History at Touro College, Graduate School. She holds a doctoral degree from Warsaw University and a second doctoral degree from New York University. Dr. Aleksiun specializes in the social, political, and cultural history of modern East European Jewry. She has written extensively on the history of the Jewish intelligentsia in East Central Europe, Polish-Jewish relations, modern Jewish historiography, the history of medicine, and of the Holocaust.

Her topic at the symposium is “Jewish Families in the Holocaust: Prewar Life Shaping Wartime Experiences” and for the breakout session: “Women coming of age during the Holocaust.”

Dr. Eva Fogelman
Dr. Eva Fogelman is a social psychologist, psychotherapist, author and filmmaker. She co-founded the Jewish Foundation for the Righteous and is co-director of Child Development Research. She was also involved in the creation of the World Federation of Jewish Child Survivors of the Holocaust. Dr. Fogelman is known for her pioneering work in healing second generation as well as Holocaust child and adult survivors and their families. She is an advisor to the United States Holocaust Memorial Museum and one of the founders of the Hidden Child Foundation. She has published widely in professional as well as general publications.

Her topic at the symposium is “Developing resilience to historical trauma” and for the breakout session: “Embracing or avoiding family conversation”.

Dr. Zelda Abramson
Dr. Zelda Abramson is recently retired as a professor of Sociology at Acadia University. Her areas of teaching and research include: methodology, health, and family. As a public sociologist, she strives to combine academic research with social activism. Dr. Abramson grew up in Montreal as a child of Holocaust survivors.

Her topic at the symposium is based on her latest book “The Montreal Shtetl; Making Home after the Holocaust” and for the breakout session: “Refugees Rebuilding Lives.”

Daniel Brooks
Daniel Brooks is Vice President and founder of 3GNY. Daniel has a B.S. in Communications from Boston University. He is a certified Holocaust educator, and volunteers as a gallery educator at the Museum of Jewish Heritage in New York. Daniel is also active in Israel education and advocacy. He is an HR professional at a law firm in Manhattan. Daniel is the grandchild of four Holocaust survivors. 3GNY is an educational non-profit organization whose mission is to educate diverse communities about the perils of intolerance and to provide a supportive forum for the descendants of survivors.

His topic at the symposium is “The Urgency of Holocaust Education in the 21st Century.”

Presented by: the Centre for Holocaust Education and Scholarship (CHES)in cooperation with the Azrieli Foundation, and the Zelikovitz Centre for Jewish Studies at Carleton University. 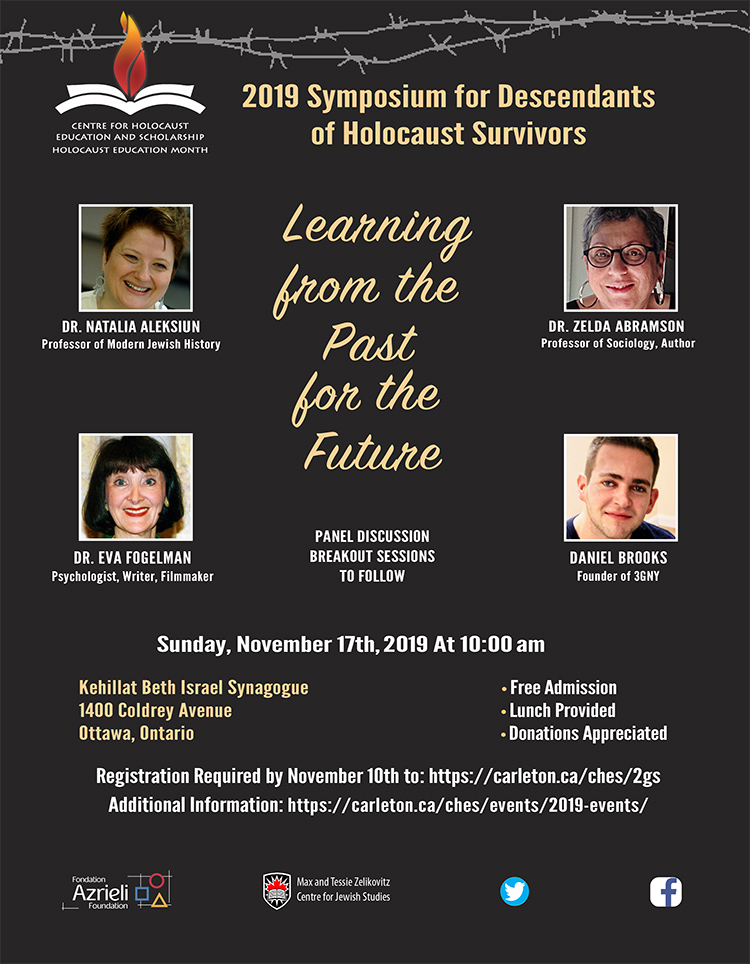 The workshop will provide the Ottawa Police and partner agencies with tools to recognize racism and Anti-Semitism.

Open to all Ottawa Police Service and partner agencies.

Presented by CHES, in cooperation with the Diversity and Race Relations Unit of the Ottawa Police, the Azrieli Foundation, and the Zelikovitz Centre for Jewish Studies at Carleton University.

Bernie Farber is the CEO of the Canadian Anti-Hate Network. His career spans more than a quarter of a century focusing on human rights, anti-racism, pluralism and inter-ethnic/faith/race relations. His efforts have been documented in numerous Canadian human rights publications, newspapers, and magazines. He is a former chief executive officer of the Canadian Jewish Congress and his expertise has been sought by a broad range of organizations.

Len Rudner is a member of the Canadian Anti-Hate Network. He is a Principal at Len Rudner & Associates, a consultancy focusing on community advocacy, diversity, and human rights. He is the former Director of Community Relations and Outreach for the Centre for Israel and Jewish Affairs (CIJA).

Parking is free | A light dinner will be included

The 2019 Annual Teachers’ Workshop is presented by: the Centre for Holocaust Education and Scholarship (CHES) in cooperation with the Azrieli Foundation, Temple Israel, and the Zelikovitz Centre for Jewish Studies at Carleton University.

The objectives of the teacher’s workshop are to: 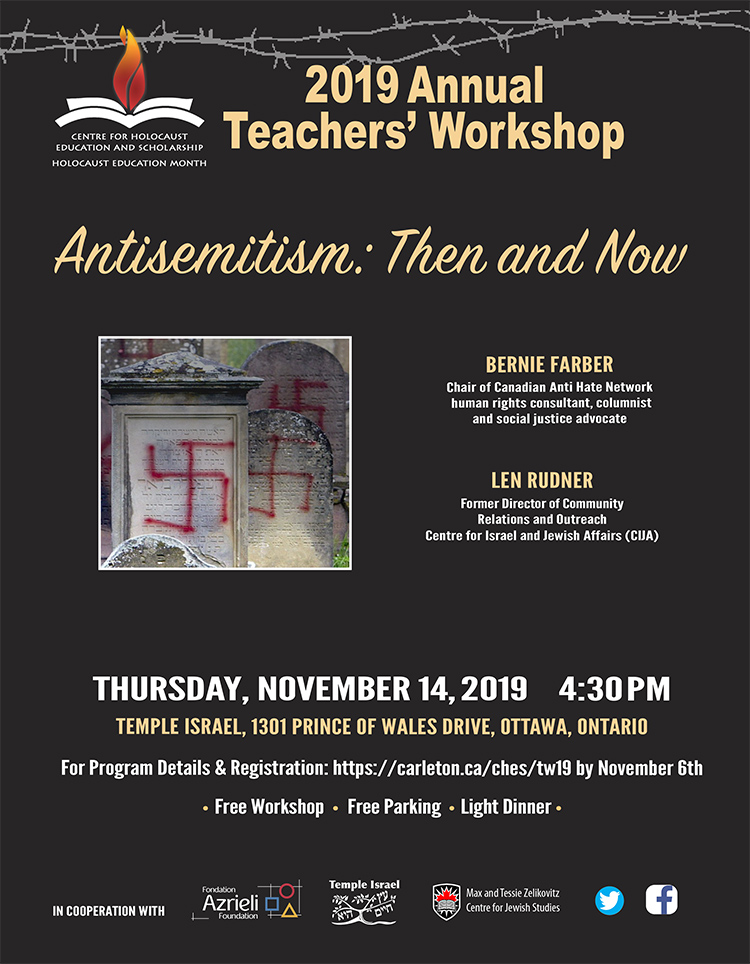 80 Years Since the Outbreak of WWII.
A Lecture in Commemoration of Kristallnacht

Kristallnacht, known as the Night of Broken Glass, a wave of violent attacks on Jewish stores, homes and synagogues (hence the shattered glass) took place across Nazi Germany and Austria on November 9 and 10, 1938, setting off an explosion of human destruction that was to become the Holocaust.

Deborah Lipstadt is the Dorot Professor of Holocaust Studies at Emory University in Atlanta and has published and taught about the Holocaust for close to 40 years. She is a world-renowned Holocaust historian and the author of six books and numerous articles including History on Trial: My Day in Court with a Holocaust Denier (2006) and The Eichmann Trial (2011). History on Trial tells the story of how she won the libel suit brought against her by Holocaust denier David Irving. Professor Lipstadt has been a consultant to the United State Holocaust Memorial Museum in Washington and in 1994 she was appointed by President Bill Clinton to the United States Holocaust Memorial Council, serving two terms. Her most recent book is Antisemitism Here and Now (2019).

Presented by: the Centre for Holocaust Education and Scholarship (CHES) in cooperation with the Azrieli Foundation, Kehillat Beth Israel Congregation, the Zelikovitz Centre for Jewish Studies at Carleton University 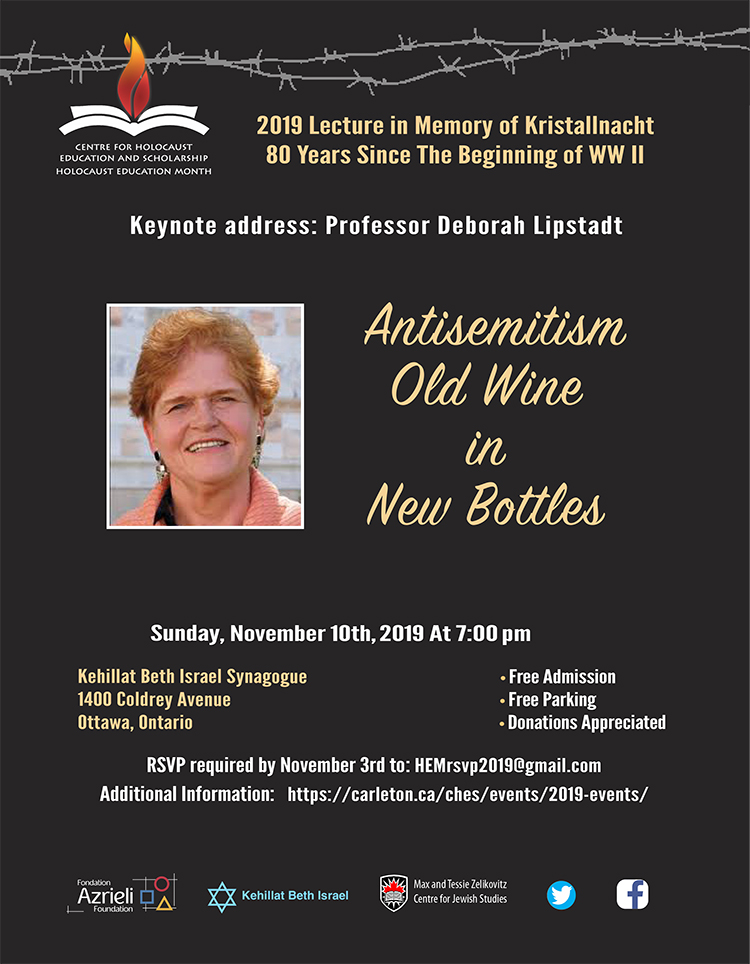 Yuri Dojc, renowned art photographer and artist is best known for his observational approach to the past, with its combination of subjectivities, empathy, and intimacy. Since the late 1990s, he has been documenting Slovakia’s last living Holocaust survivors and the country’s abandoned synagogues, schools, and cemeteries for a series called the “Last Folio”. An international success, this show has travelled extensively, with major exhibitions in Rome, Berlin, Moscow, New York, Sao Paulo among others. The evening’s program will include a documentary film by Katya Krausova, lecture & slide show by Yuri Dojc.

Reception sponsored by the Slovak embassy.

Presented by: the Centre for Holocaust Education and Scholarship (CHES) in cooperation with the Azrieli Foundation, and the Zelikovitz Centre for Jewish Studies at Carleton University. 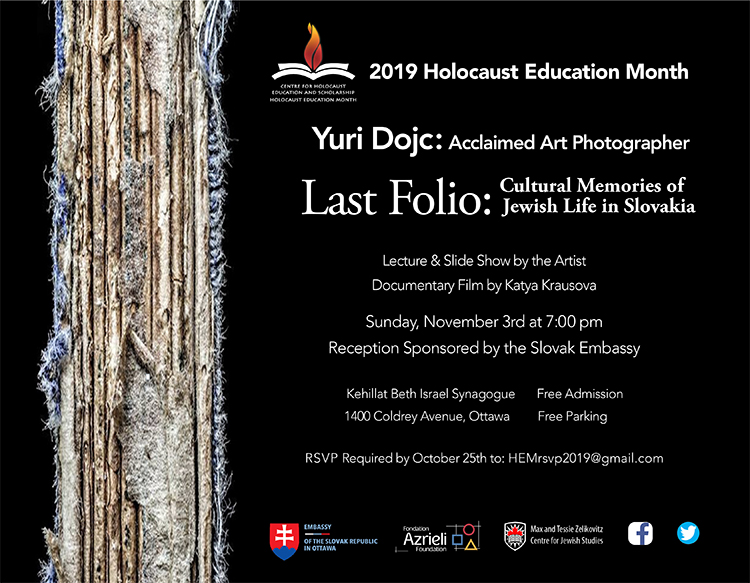 Among the Reeds: The True Story of How a Family Survived the Holocaust

Date: Sunday, October 27, 2019
Time: 9:30 AM, A “Books and Bagels” event
Location: Temple Israel Synagogue, 1301 Prince of Wales Drive, Ottawa
Cost: Free but a donation to cover the cost of breakfast would be appreciated.
RSVP: RSVP required to HEMrsvp2019@gmail.com by October 22nd.
Parking: Free

Dr. Tammy Bottner is the child and grandchild of Holocaust survivors. In her book she recounts the moving story of her own family’s travails in war-torn Europe. In her memoir Dr. Bottner not only delves into stories of hardship and resilience in the face of tragedy, but also explores how these tragedies affect later generations. Immediately after a bagel breakfast at 9:30 a.m. Dr Bottner will present her story followed by discussion and a book signing.

Words of welcome by H. E. Johan Verkamen, Ambassador of Belgium to Canada.

Presented by: the Centre for Holocaust Education and Scholarship (CHES), the Azrieli Foundation, Temple Israel, and the Zelikovitz Centre for Jewish Studies at Carleton University. 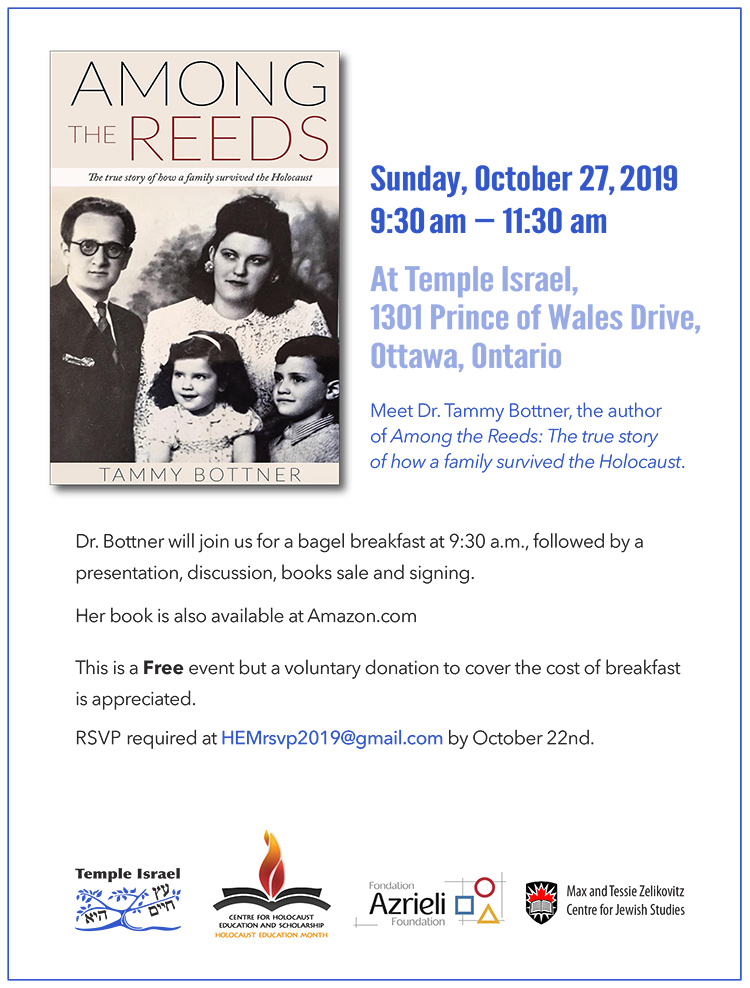 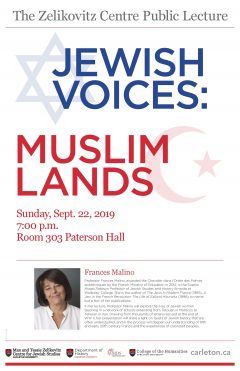 2019 Student Colloquium: Religion Out of Bounds 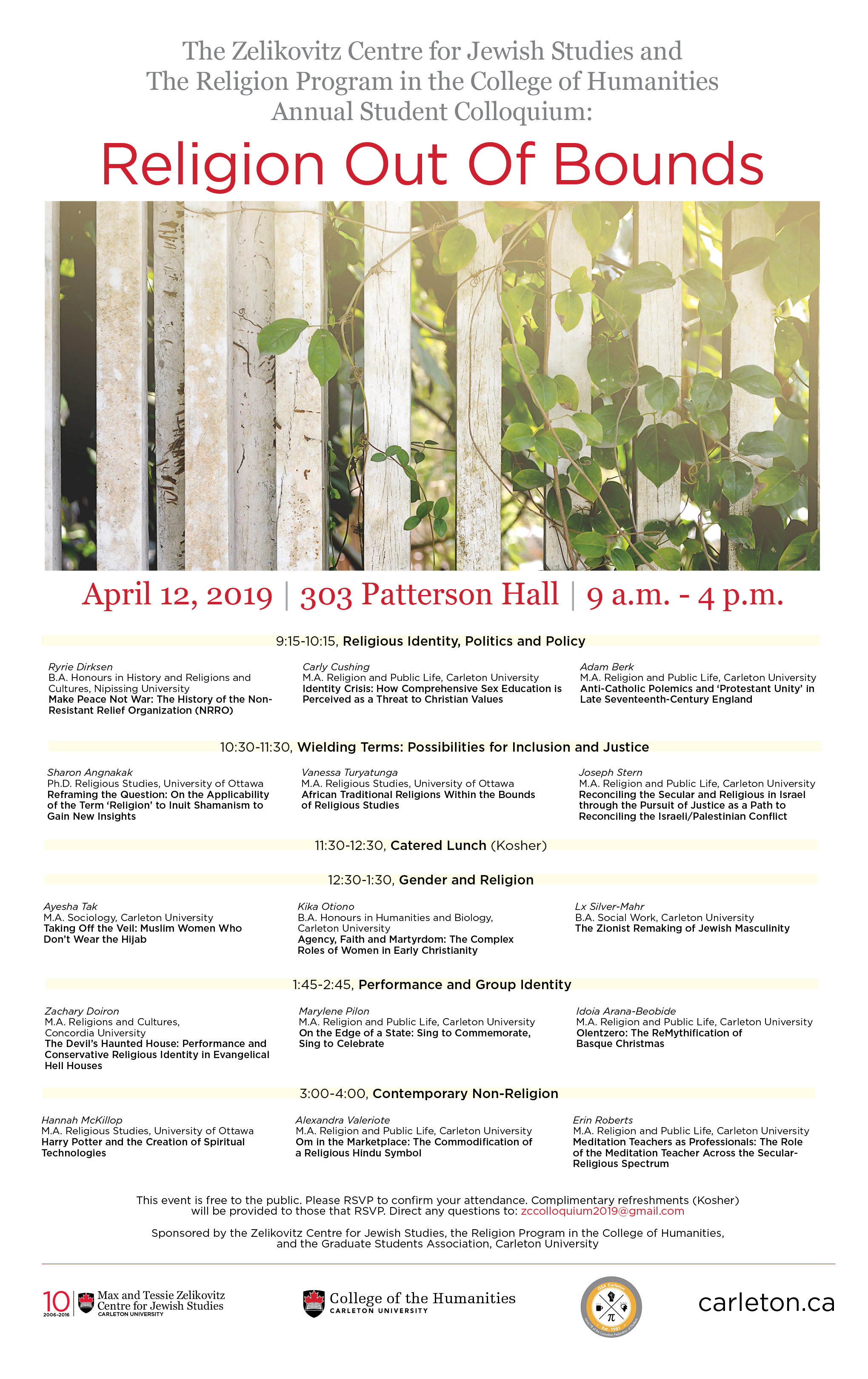 To purchase tickets in advance (recommended) call Temple Israel at 613-224-1802 ext. 5 or purchase online at www.templeisraelottawa.ca/concerts/theyellowticket.

“The Yellow Ticket” will be screened to a live performance of a new original music score by Klezmer stars Alicia Svigals and Marilyn Lerner. The film, produced in 1918 by Templehof Studios in Berlin, was originally released as “Der Gelbe Schein” (The Devil’s Pawn). It stars a young Pola Negri as she was climbing her way from the stages of Warsaw to Hollywood and international stardom. It tells the story of a Lea, young Jewish woman who aspires to study medicine at the academy in St. Petersburg. The film sensitively portrays the anti-Semitism prevalent in Russia, which forces Lea to take on a “yellow ticket” – the only document that would allow her, as a Jew and a woman, to reside in St. Petersburg. The “yellow ticket” designated the bearer as a prostitute.

The production was shot entirely in Warsaw near the end of the First World War including the Jewish neighbourhood of Nalewki – the Warsaw ghetto – that would later be destroyed along with its inhabitants, some of whom are captured in street scenes in the film.

Alicia Svigals, an accomplished Klezmer violinist based in New York and co-founder of the “Klezmatics”, was commissioned in 2013 to write a new musical score for the film by the Foundation for Jewish Culture. Svigals, along with jazz pianist Marilyn Lerner, will be performing this score live during the screening. 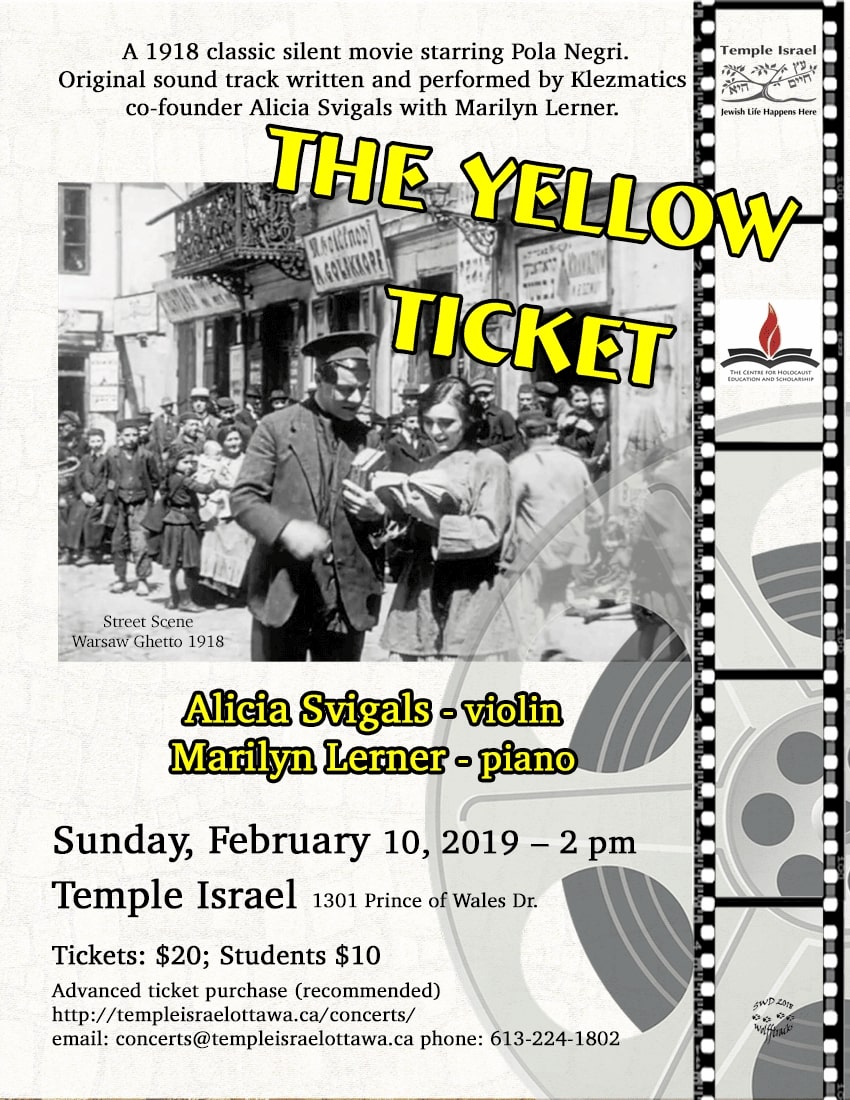 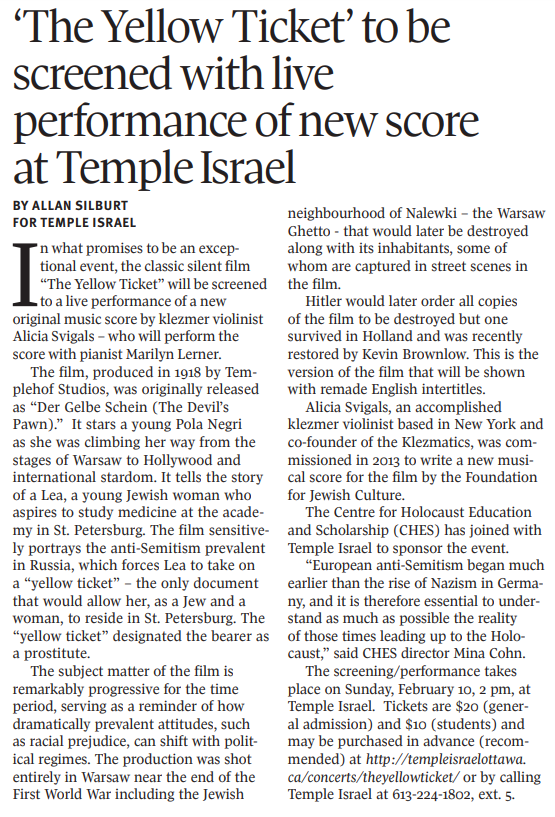 The event will feature a special lecture by Eli Rubenstein, National Director of the March of the Living Canada. He will reflect on the Holocaust and how to respond to hatred without losing our humanity.

You will also have the chance to view Library and Archives Canada’s latest acquisition: a rarely seen book with insights on the Holocaust and its links to Canada. This new item is bound to attract lots of attention, so be sure to visit our website on January 23 to discover more about it! 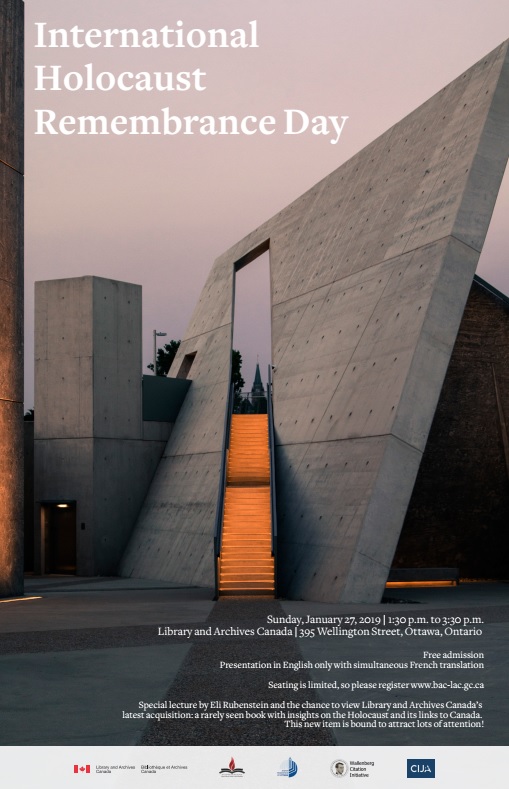