Below is a listing of all Zelikovitz Centre events that occurred in 2016.

Please join us for Sufganiyot (kosher Israeli style donuts) and coffee at a research open house at the Max and Tessie Zelikovitz Centre for Jewish Studies.

Meet with colleagues and graduate students working in the areas of Jewish Studies across the University. Speak to the ZC team about how we can support your research!

Keynote address: Prof. Irwin Cotler, Emeritus Professor of Law at McGill University, a former Minister of Justice and Attorney General of Canada, and a former Member of Parliament. Cotler is an international human rights lawyer and is the current Chair of the Raoul Wallenberg Centre for Human Rights in Montreal.

Prof. Cotler will discuss the conditions under which genocide can occur including state sanctioned incitement to hatred and the indifference of bystanders.

Following a dinner break teachers will participate in 3 stimulating rotations: The Nuremberg Hate Laws, the Nuremberg Trials, and The Universal Declaration of Human Rights. The evening will conclude with the discussion “What Have We Learned? What Can We Do?

Teachers will leave the workshop with hands-on ideas and educational material to use with their students. A certificate of completion will be provided.

HEM Program of Centre for Holocaust Education and Scholarship (CHES) in cooperation with Temple Israel, Raul Wallenberg Centre for Human Right and the Zelikovitz Centre for Jewish Studies, Carleton University. 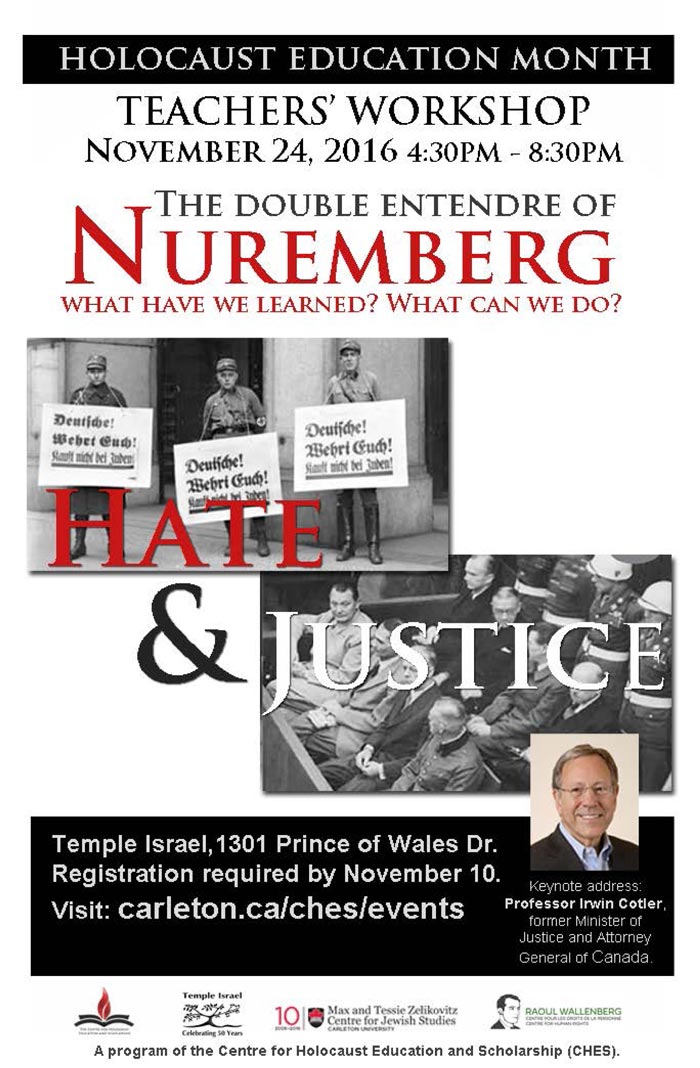 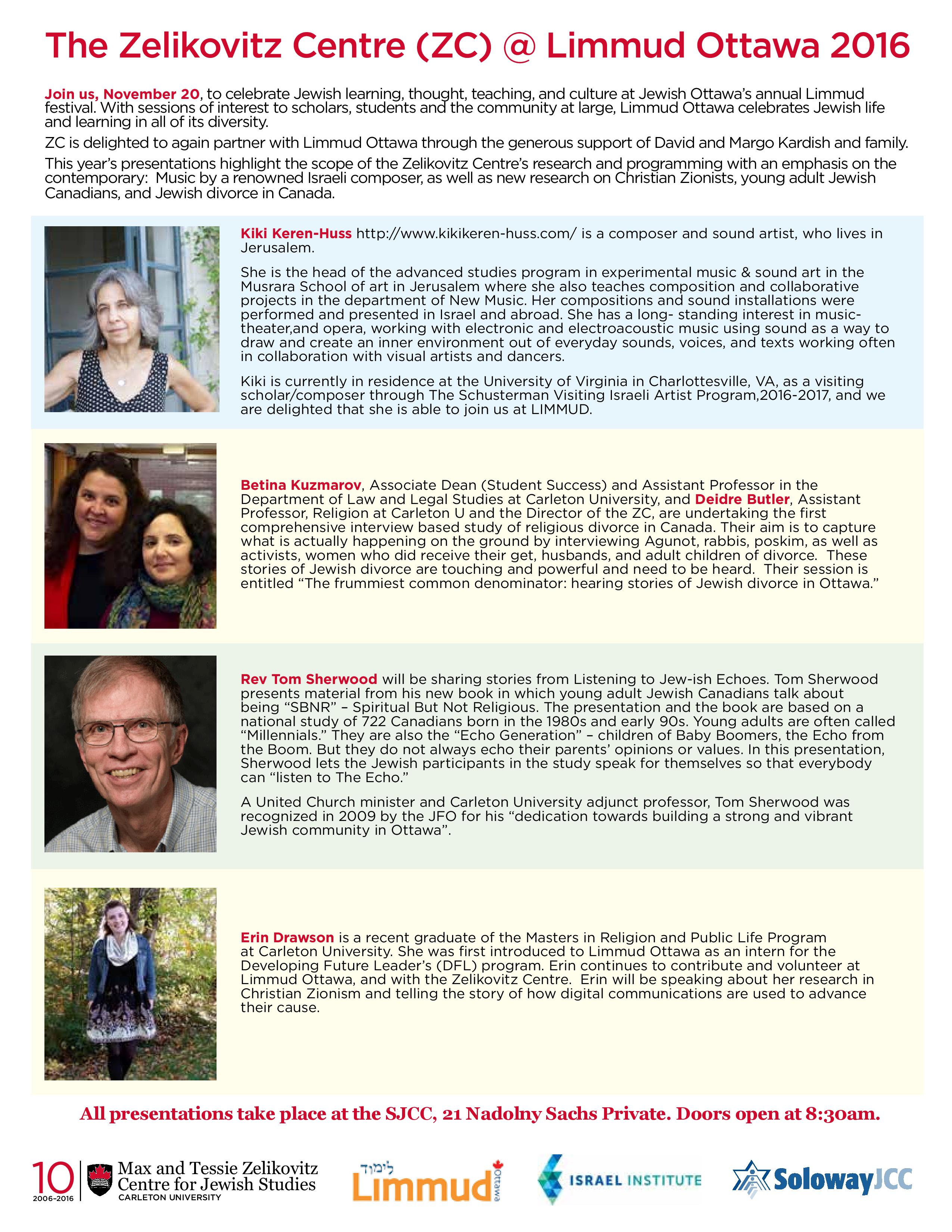 The Centre for Holocaust Education and Scholarship would like to invite you and guest(s) to attend a special screening of The Ottawa Holocaust Survivors’ Testimony Project.

Thanks to donors like you, we have now completed the first phase of the project, documenting testimonies of ten Ottawa Holocaust survivors. These oral histories will serve as historical resources that will allow future generations of students, researchers, teachers, and others to hear and see the people who experienced and witnessed the genocidal policies and crimes of the Nazis and their collaborators.

A One Man Show About Chine Sugihara

Actor Mr. Shingo Misawa in the play The Decision: Visa of Life (Sempo Sugihara Story) will tell the true story of Chiune “Sempo” Sugihara (1900-1986). Sugihara was a Japanese diplomat, serving as Vice-Consul of Japan in Kaunas, Lithuania at the outbreak of World War II. Caught between the Nazis and the Soviets, Jewish refugees from Poland and Jewish Lithuanians were desperately seeking ways to leave the country. They came to Sugihara looking for help. Risking his career and his own safety, Sugihara made the decision to issue transit visas which saved over 6,000 lives. In 1985, Israel named him among ‘The Righteous Among the Nations’ for his actions. A presentation by a child of survivors who were saved by Sugihara will follow the play.

HEM Program of the Japanese embassy in cooperation with the Centre for Holocaust Education and Scholarship (CHES) and the Zelikovitz Centre for Jewish Studies Carleton University. An Evening to Commemorate the 78th Anniversary of Kristallnacht

Keynote address Lessons of the Holocaust – A Historian’s Reflections by Michael R. Marrus. Today the Holocaust is understood to be not only one of the defining moments of the twentieth century but also a touchstone in a quest for directions on how to avoid such catastrophes. In Lessons of the Holocaust, the distinguished historian Michael R. Marrus challenges the notion that there are definitive lessons to be deduced from the destruction of European Jewry. Instead, drawing on decades of studying, writing about, and teaching the Holocaust, he shows how the “lessons” of the holocaust are constantly challenged, debated, altered, and reinterpreted. Prof. Marrus is Senior Fellow of Massey College and the Chancellor Rose and Ray Wolfe Professor Emeritus of Holocaust Studies at the University of Toronto.

The Ari van Mansum Award recipient for excellence in Holocaust Education will also be announced. 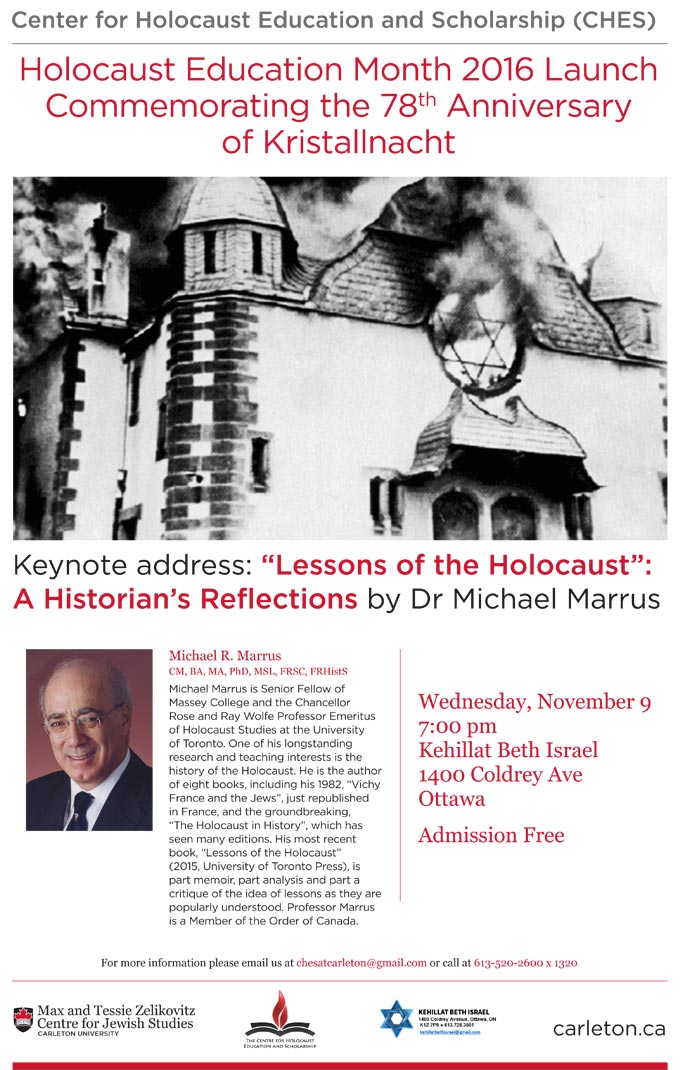 Prof Dariusz Stola, the director of the POLON museum of History of Polish Jews, will speak about the unexpected revival of interest in Jewish history in Poland and how the museum responds to and strengthens this interest. He will present basic ideas the museum stands on, and how does it differ from other Polish and Jewish museums in Europe. POLIN has been awarded the title of the European Museum of the Year 2016, the most important museum award in Europe. 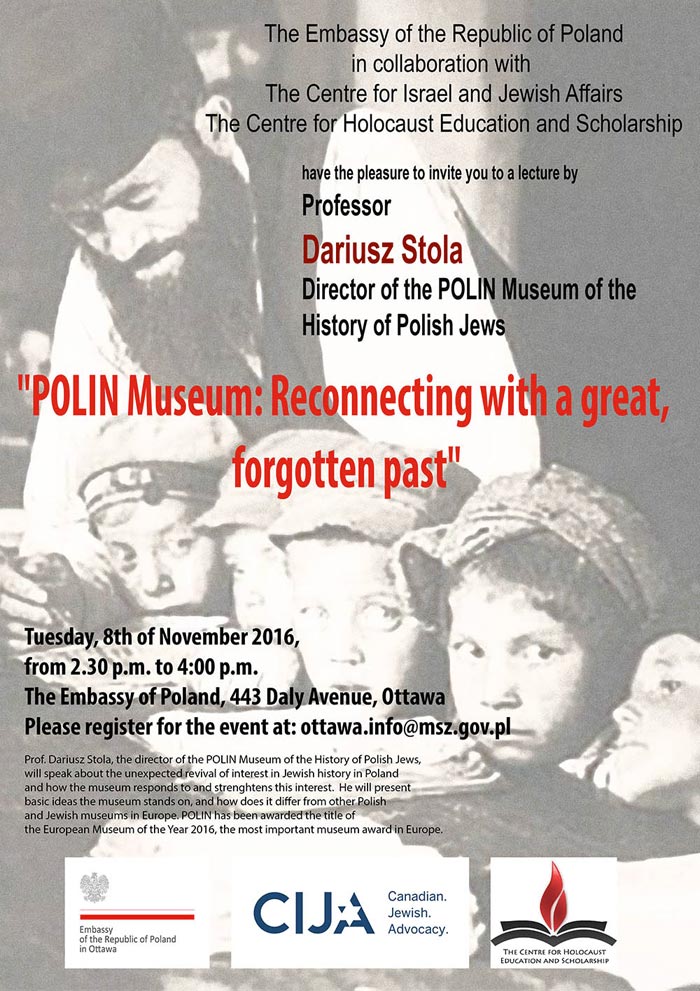 Lecture from Dr. Diane Afoumado: “The MS St. Louis and its Voyage”

Dr. Diane Afoumado is the head of Tracing Services at the US Holocaust Museum, and a specialist on the MS St Louis. She will be sharing her research and findings on the ocean liner and its voyage. 907 Jewish refugees from Nazi Germany who were denied entry to Cuba, the USA and Canada in 1939 when they arrived. The ship was forced to return its passengers to four European countries. 254 of its passengers later perished in the Holocaust.

This Program is made possible by the Campus Outreach Lecture Program of the United States Holocaust Museum’s Jack, Joseph and Morton Mandel Center for Advanced Holocaust Studies, supported by Jack and Goldie Wolfe Miller”. Ottawa co-sponsors of this event are: EURUS, Carleton University, the Department of History, Carleton University, the French Embassy of Ottawa, the Centre for Holocaust Education and Scholarship (CHES), and the Zelikovitz Centre for Jewish Studies.

Dr. Diane F. Afoumado is Chief of the Research and Reference Branch at the Holocaust Survivors and Victims Resource Center at the United States Holocaust Memorial Museum in Washington, D.C. Formerly Assistant Professor of Contemporary History at the University of Paris X-Nanterre and the Institut National des Langues et Civilisations Orientales (INALCO) in Paris, she worked for the two French Commissions related to compensation to Jewish victims. She also worked as a Historian for the Archival Division of the Centre de Documentation Juive Contemporaine – Mémorial de la Shoah.

She has extensively researched and written on the St. Louis tragedy and will be speaking on this. Unfortunately many of the same issues that faced the refugees then face today’s refugees.

Without living through the events of the Holocaust, 2nd Generation, the Descendants of Holocaust survivors, were affected by their parents’ experiences. Many find themselves searching for information their parents did not share. Behind the urge to research their family histories is the need for understanding and for knowledge of the missing links their families’ past. The Symposium includes exceptional speakers with a broad range of experiences who will examine topics of specific interest to the 2nd and 3rd Generation of Holocaust Survivors.

Trauma and the 2nd Generation. Dr. Paula David, professor of gerontology and clinical practice at the Faculty of Social Work at the University of Toronto.

Discussing the Holocaust with Children – Timeless Lessons for Today’s Generation and the Impact of her Parents’ Experiences on Her Life and Work. Kathy Clark: Local children’s author and a child of survivors.

HEM program: This Program is made possible by the Campus Outreach Lecture Program of the United States Holocaust Museum’s Jack, Joseph and Morton Mandel Center for Advanced Holocaust Studies, supported by Jack and Goldie Wolfe Miller, sponsored by Canadian Jewish Holocaust Survivors and descendants (CJHSD), the French embassy in Ottawa, the Council of the Jackob M. Lowy Collection, The Canada Israel Cultural Foundation, The Zelikovitz Centre for Jewish Studies and the department of History at Carleton University. 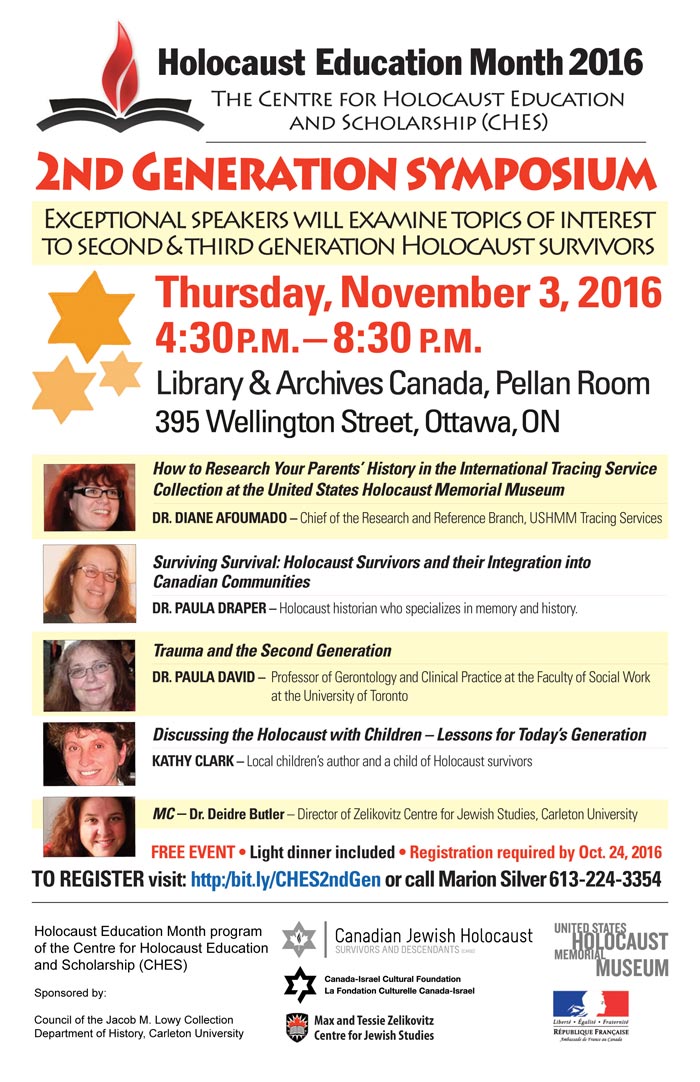