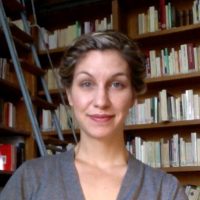 Sophie Marcotte Chénard’s primary research interests lie in modern and contemporary political philosophy, 19th and 20th-century German thought, philosophy of history, French democratic theory, as well as interpretive approaches to the study of political ideas. She received a BA in Political Science and Philosophy and an MA in Philosophy from the University of Ottawa, before completing her PhD in Political Philosophy at the Ecole des Hautes Etudes en Sciences Sociales (EHESS) in Paris in 2016. She was also a Visiting Doctoral Fellow at the Committee on Social Thought (University of Chicago, 2013) and completed a Postdoctoral Fellowship in Political Theory at the University of Toronto.

She is the author of Devant l’histoire en crise. Raymond Aron et Leo Strauss (University of Montreal Press, 2022). The book offers a novel account of the dialogue between two central figures in 20th century political thought and assesses the practical implications of the crisis of historicism for political philosophy during the interwar period in Germany and France. The book develops the argument that historicism involves more than the threat of moral relativism and nihilism and paves the way for a renewed reflection on the nature and limits of political judgment.

She was recently awarded a SSHRC Insight Grant for a project that investigates the evolution, uses and performative effects of the concept of crisis in contemporary political discourse. Drawing from the Begriffsgeschichte approach first developed by Reinhart Koselleck, she analyzes how the contested concept of crisis has become a central notion used as a tool or weapon in political discourse. She has published articles and chapters on continental political philosophy (Leo Strauss, Raymond Aron, Karl Löwith, Reinhart Koselleck), contemporary interpretations of Machiavelli (Claude Lefort, Quentin Skinner), theory of history (Collingwood, White) as well as interpretive approaches to the history of political thought.

Hayley Malouin (PhD): “Rings of Power: Circus and Democracy in the Modern Age”

Review: H-Diplo Roundtable XXI-54 on I. Stewart. Raymond Aron and Liberal Thought in the Twentieth Century

“A Practical Past Beyond the Historical Past?”, Book Forum, Journal of History of Ideas Blog, April 2017.