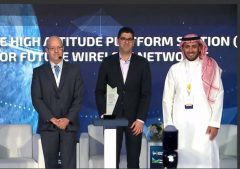 The award was received by the first and second authors (Safwan Alfattani and Wael Jaafar), in Riyadh, Saudia Arabia at the “Connecting the World from the Skies Forum” in the presence of 3000 plus in-person and virtual attendees. View here

A cash prize of USD $10,000 was also awarded and will go to the first author, Safwan Alfattani, a PhD student at uOttawa Professor Halim Yanikomeroglu co-supervising with Professor Abbas Yongacoglu.

This new award came just weeks after the best paper award in an IEEE conference (attend.ieee.org/wisee-2022) for another Carleton paper in the same area of Stratospheric HAPS Networks was received by Hongzhao Zheng. In addition, another Carleton paper in the HAPS area won the IEEE Fred Ellersick Prize last year. This prestigious IEEE award was given to two papers in 2021 out of 1,800 papers appeared in all six IEEE Communications Society magazines published during the preceding three years.

Carleton’s research in this domain continues to receive attention, both locally and internationally. Professor Halim Yanikomeroglu was recently interviewed for the Ottawa Business Journal piece on the “The future of wireless networks could be in the clouds”. See full interview here