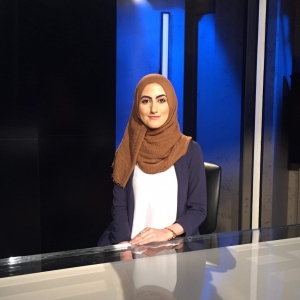 Having multiple places around the world that she calls “home,” Haneen recognizes how stories shape places and people.  She graduated from Carleton University with a Bachelor of Journalism and a minor in American Sign Language in 2019.

During her undergraduate degree, Haneen was involved in the Charlatan, Carleton’s independent newspaper. From 2017 to 2019. she served as the National Editor. During her time there, Haneen developed a miscellaneous section into one that is focused, and dedicated to highlighting issues that affect students the most.

Haneen was also the recipient of the Marisa Ann Golini Memorial Scholarship for investigative reporting and the Rogers Communications Award in television journalism.

Upon graduation, she joined the CBC Ottawa newsroom as a multi-platform journalist.

As someone who continuously questions how mainstream media covers marginalized communities, Haneen is excited to embark on her Master of Journalism at Carleton and explore topics she’s passionate about.