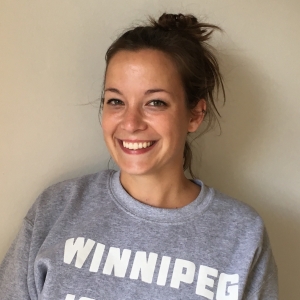 If you ask Kate’s mom she will say that Kate has always marched to the beat of her own drum (a very loud and off-beat drum). Instead of going to university when she graduated high school, Kate went back-packing through Guatemala. Instead of finishing her university degree on time, she went scuba diving in Guatemala. When Kate finally found a full-time permanent job, she quit it to go bartending in Turkey. When she found another full-time permanent job, she quit it to go teach English in Morocco.

Two years ago, Kate was ready to quit her job again to go travelling, when, on a whim, she tried doing stand-up comedy. Kate told a joke about exercising that no one really liked but despite a luke-warm reception from the crowd, Kate couldn’t wait to try it again. She soon was spending every night writing jokes and performing at open mics. Her hard work paid off and two months after starting comedy she was booked to do a spot at the Winnipeg comedy festival.

Since then she has performed across the country at different festivals and on different stages. Comedy has shown Kate the power a well- written (and funny) story can have. Learning to tell people’s stories in a way that is compelling and engaging is why she wants to study at Carleton.  She wants to take her love of writing and humour and learn how to use those skills in new ways. She is thrilled for the next two years of school and has promised her mom she won’t spend her student loans on travelling (at least not yet).