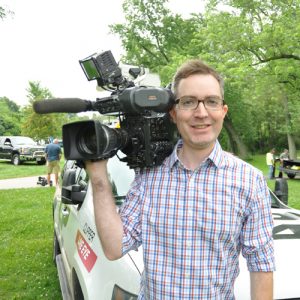 Spencer was lucky enough to know from a young age what he wanted to do — to work in news.  Since being awarded his undergraduate degree, he’s worked in Toronto for Breakthrough Films, Global TV and Rogers Media. For the past seven years he’s been stationed at CP24 / CTV News Toronto as an ENG photographer and live truck operator.  An NPPA (National Press Photographers Association) accredited shooter, Spencer has covered stories like the Air France flight 358 crash, the “Toronto 18” terror trial, the G20 riots, the Toronto International Film Festival, Occupy Toronto, the Rob Ford controversy and of course, many elections and crime stories.  Outside of the news business, Spencer can be found scouring comic book stores for his ever-expanding comic book and graphic novel collection.