The audio recordings you will find below feature faculty members talking about recent research projects or their longer-term research agendas. Ever wondered what sparks a research interest? Curious about the kinds of topics faculty members are currently examining? Take a listen to the recordings below to learn more about the exciting and important research being done at the School.

The audio recordings you will find below feature faculty members talking about recent research projects or their longer-term research agendas. Ever wondered what sparks a research interest? Curious about the kinds of topics faculty members are currently examining? Take a listen to the recordings below to learn more about the exciting and important research being done at the School.

Glen Toner Reflects on his Career

Stick handling to success or a lucky shot? Glen’s unexpected path to academia

In this first conversation, former SPPA Director Graeme Auld sat down with Professor Glen Toner to travel back to the years before Glen’s academic career. Take a listen. You’ll hear about how lessons learned from the hard work of competitive hockey helped Glen navigate and ultimately succeed in graduate studies in political science at Carleton, success that then helped him land a job at Carleton as a tenure track assistant professor. The support and mentorship of certain key individuals were instrumental for Glen’s early steps, support that he has continued to pay forward in his career ever since.

Public policy in a liberal democracy is the result of competition among political parties for the support of a diverse electorate. This ongoing contest takes place in the context of resource use in the conduct of both private and public life. A full understanding of what governments do must therefore incorporate the consequences of political competition for resource allocation, whether the objective is to understand observed policies or to propose alternatives. But what exactly is political competition? How can its intensity be measured? And how can we study the implications of variation in the degree of competition for policy choices and the level and distribution of economic welfare?

Professor Stan Winer’s research is grappling with these and related issues. With colleagues in Canada, the U.S., the U.K. and India he has amassed large datasets that facilitate the measurement of the intensity of political competition and the study of its consequences. In this SPPA Audio Files, former SPPA Director Graeme Auld sits down with Professor Winer to learn about this work, what projects and insights it has generated, and where he is going next with his research. Take a listen.

In a country as vast as Canada, the distance between communities and policy making can seem immense and insurmountable. For Professor Katherine Graham, this perceived and real distance has been an animating concern for her long-term research agenda. She has sought to work with communities across Canada to empower them to have a voice in policy processes to bring about changes meaningful to their priorities and concerns. In this instalment of #SPPAaudiofiles, former SPPA Director Graeme Auld had a conversation with Professor Graham about her community research, looking back to why she began embarking on this form of research and learning about some of the current projects she is working on.

Why do physicians choose to leave interdisciplinary primary care teams?

Primary care is a critical feature of health-care systems around the world. In recent years, many jurisdictions have sought to complement the work of family physicians with integrated teams that offer the potential to improve care for patients. The idea is that when physicians work with nurses, pharmacists, psychologists and other allied health professionals, patient needs are better met through coordinated and integrated care. Plus, the thought is that family physicians may prefer the additional workload flexibility of this team-based approach, making this specialization more attractive to medical students considering different specializations.

In this #SPPAaudiofile, former SPPA Director Graeme Auld sat down with Professor Mehdi Ammi to learn about a recent paper he co-authored on the effects of this form of primary care in Quebec, known as Family Medicine Groups. The study, published in Health Services Research in 2019, reports on an analysis of five years of data on family physicians who joined a Family Medicine Group. The analysis focused particularly on why physicians chose to stay or leave these Family Medicine Groups, which is an important question to investigate to determine whether the promise of this form of primary care is being realized.

Amanda Clarke on Federal Bureaucracy in the Digital Age

Our digital age has brought with it calls for governments to get with the times, to open up, to be more agile and savvy in the way they generate, use and share data. These pressures, and what should be done about them, are at the heart of Professor Amanda Clarke’s just published book Opening the Government of Canada: The Federal Bureaucracy in the Digital Age.

Published by UBC Press, the book documents efforts by the Canadian federal bureaucracy to react to the challenges and opportunities presented by our new digital world. Much work on digital governance has come from scholars who see great potential in the emancipatory powers of this technological revolution. Yet, Professor Clarke offers a note of caution, reminding us that a race to adopt digital approaches should not undermine democratic principles that give our system of government resilience.

In this instalment of SPPA Audio Files, former SPPA Director Graeme Auld, sat down with Professor Clarke to learn more about the book, and how it fits with her larger research agenda.

Susan Phillips on why philanthropy matters for public management

Professor Phillips is a leading expert on the nonprofit and philanthropic sectors, and she has been the lead architect of Carleton University’s efforts to bring graduate-level training to these sectors in Canada through programs in Philanthropy and Nonprofit Leadership.

“Dancing with giraffes” is an important paper that pushes experts in public administration to pay more attention to Canadian foundations to understand the different ways in which these organizations shape public affairs. These foundations do not just provide funds to needy causes, they also can advance social innovation, build new fields of practice, shape ideas, and advocate for policy change and broader social change. Professor Phillips helps us understand these different paths of influence, their limits and what they mean for how governments can more creatively engage the philanthropic sector.

James Meadowcroft on movement toward a low carbon economy in Canada

Former SPPA Director Graeme Auld sat down with Professor James Meadowcroft to talk about his recent article in the journal Canadian Public Policy. “Let’s Get this Transition Moving!” argues that we ought to think about climate change not as a question of targets but more as a long, and ongoing, transition that will move us from our current social and technological dependence on fossil fuels to a carbon-emission-free society.

Professor Meadowcroft explains the rationale for this change in framing, and suggests it usefully redirects our thinking towards regional approach to decarbonization, green development strategies, and low-carbon politics as being as important as low-carbon economics.

From June 23 to 26, 2019, Carleton University, under Professor Meadowcroft’s leadership, will host the 10th meeting of the International Sustainability Transitions Conference, an event that brings together global thought leaders on the social, technical, political and policy dimensions of transitions, including decarbonization.

Lisa Mills on Maternal Health and Health Policy in Mexico 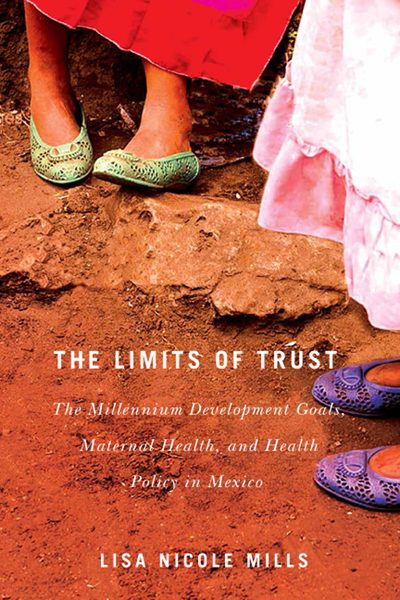 The Limits of Trust: The Millennium Development Goals, Maternal Health, and Health Policy in Mexico, which investigates the reasons why Mexico did not meet the Millennium Development Goal of reducing maternal mortality by 75%. Efforts by feminist groups and local governments fell short because of systematic failures to ensure the trustworthiness of the health care system.

When the United Nations announced the Millennium Development Goals (MDGs) in 2000, approximately half a million women worldwide died each year from complications associated with pregnancy and childbirth. The fifth MDG aimed to reduce the maternal mortality rate by 75 per cent between 1990 and 2015, but by the target date, the goal had not been reached.

In The Limits of Trust Lisa Nicole Mills investigates the reasons why Mexico in particular did not meet its objective. Focusing on the states of Guerrero, Chiapas, and Oaxaca, where maternal mortality rates are the highest in the country, Mills looks into how MDG 5 has been implemented in Mexico, how it has been experienced by individuals and groups, what obstacles have been encountered, and what factors have facilitated improvements in maternal health. Using data gathered from interviews with NGOs, government officials, and health care workers, the book argues that government and feminist NGO efforts to build trust in the health care system have fallen short because of systemic failures to protect women’s rights and enhance the quality of health care.

In Mexico a woman’s risk of dying from a pregnancy-related complication is five times higher than in developed countries. The Limits of Trust explores the realities of implementing maternal health initiatives on the ground in rural, remote, and impoverished areas, and the steps that can be taken to successfully combat maternal mortality.

Leslie Pal on Public Administration in a Globalized World

Please join former SPPA Director Graeme Auld as he interviews faculty member Leslie Pal on his research, published in the chapter “Public Administration in a Globalized World” in Issues in Canadian Governance, edited by Jonathan Craft and Amanda Clarke.

Issues in Canadian Governance demonstrates how the key principles and institutions of governance affect Canadians by revealing how they work in the real world. This text uses an applied case study format to breathe life into the debates that shape Canadian public policy. These timely cases bring valuable context to the various issues explored in the text and allow the text to be leveraged in a practical, hands-on way.

This text also incorporates the voices of expert scholars who provide readers with a holistic snapshot of current thinking in the field of public administration. This broad perspective is invaluable in exploring matters such as responsible government, ethics and public spending, accountability of public officials, access to information, political neutrality and the public service, and contemporary policy debates.