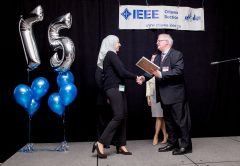 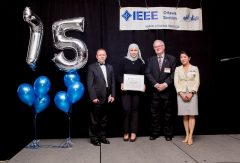 The purpose of IEEE Canada Women In Engineering Prize is to recognize excellence in young women engineering professionals and to support the Women In Engineering programme within IEEE in Canada. One prize each year with the value $1,000 is awarded. Nominations are evaluated based on the substantial success in the academic program, demonstration of interest in extracurricular interests and volunteer service to IEEE as well as involvement in either IEEE Young Professionals or WIE programs. The Grants Committee of the IEEE Canadian Foundation reviews and ranks the nominations, and forwards their recommendations to the Board of Directors of the IEEE Canadian Foundation, who then determines the recipient at their first meeting of each year, normally held in early April. A framed certificate was presented to Anastassia by David Whyte, the President of IEEE Canadian Foundation, at the 75th IEEE Ottawa Section Annual General Meeting and Banquet on November 15th, 2019. Congratulations Anastassia!