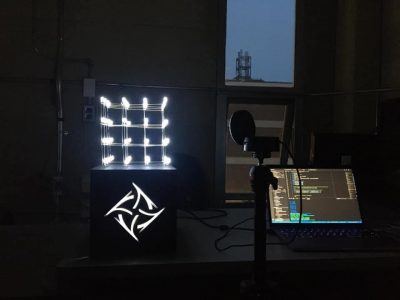 The team was incepted with project founder and systems engineer Christian Sargusingh, QA and front-end developer Steven Zhou and embedded high-speed digital engineer Aaron Huang. The team has since extended to include Brandon Zhu who now works on the data structures and algorithms which govern our image recognition neural engine. The team includes a mix of Computer Systems and Electrical Engineering graduates and is looking to expand to attract more talent to continue to develop this emergent technology.

The Light Emitting Access Point (LEAP) Project is a proof-of-concept for a one-way, encryption independent, wireless communication system. Modern network infrastructure such as fibre optic, fixed/mobile wireless, and satellite relies on encryption to keep data secure due to the nature of their transmission mediums. Encryption algorithms are becoming increasingly complex adding computational overhead to networking systems. Therefore, encryption is not a sustainable solution for long-term network security.

LEAP provides a platform for a new wave of secure transmission technologies that operate securely independent of encryption algorithms. LEAP uses a rigorous design philosophy with a custom data transfer protocol framework emphasizing data security. The LEAP transmitter uses light to transmit data to a single or multiple cameras or photo receiving devices over short-ranges within line-of-sight. It exploits two and three-dimensional matrices enabling simultaneous communication to multiple users by computing the relative position of each receiving device. This is accomplished using a specialized encoding and decoding algorithm by applying concepts in Euclidean space and infinite mathematics. Finally, added cell multiplicity results in a proportional increase in the theoretical bandwidth capabilities, distinguishing it from conventional single-cell light communication technologies.

The Cowie Innovation Award is given on the recommendation of the Dean of the Faculty of Engineering and Design, to one student or one team of students in the final year of a Bachelor of Engineering degree for demonstrating top quality innovation in Engineering. It was established in 2006 by Alexandra Cowie in memory of her late husband, Wilbur Elliott Cowie, BASc, MASc (Toronto), PEng.