A Witness to History

BBC Chief International Correspondent Lyse Doucet has been on the front lines of many conflicts, but it’s the Syrian War that has emerged in her mind as the most enduring, destructive and consequential conflict of our generation. 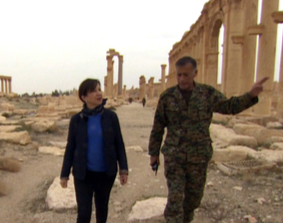 “It is the cautionary tale of our time,” explains Doucet, who has been reporting on conflicts in the Middle East and beyond for more than 30 years. “Social media has made it the most documented war of our time and yet the world has been incapable of stopping this terrible spiral into what many call ‘the greatest human disaster of the 21st century.’”

Even as she crosses continents on a regular basis, Doucet’s attention to Syria is unwavering. She’s currently conducting interviews for a two-part TV documentary on the Syrian war for the BBC’S national and global networks. It will rely heavily on her reports from the eld as the conflict unfolded.

“We wanted to go back and ask why the world failed, and ask why Syrians on all sides made the choices they did. While the rules of war were violated on a daily basis, there needed to be a political solution, which seemed beyond the grasp of world powers and the UN Security Council,” says Doucet.

Throughout this conflict, which is now approaching its seventh year, the UN’s main political body has been gridlocked. While Russia and China back Syria’s government, the West has sided with the opposition.

Doucet is in the midst of interviewing players on all sides—the government, the rebels, protestors, senior offcials from the main foreign powers—to ask whether they think the war could have been avoided, in hindsight. Doucet says most of the interviews end in tears.

“It’s not just the bad people against the good people. There are those on all sides,” she insists. “We’re looking at the dark and the light because it’s the only way to understand the shifting kaleidoscope that is Syria.”

Doucet’s strong sense of service and justice began early in her upbringing and career. She was raised in small-town New Brunswick, where her Aunt Gloria, a missionary, introduced her to the idea of working abroad.

After earning a BA from Queen’s University and an MA in International Relations from the University of Toronto, Doucet volunteered to teach English in the Ivory Coast with Canadian Crossroads International. Soon after, she transitioned to freelancing in West Africa for Canadian news outlets and the BBC.

This led to her life-long career with the BBC, beginning with a posting in Kabul, then Islamabad, Amman and Jerusalem.

As a foreign correspondent, she covered all of the major conflicts in the Middle East since the mid-1990s. This led to a personal connection to the region, and to Syria in particular.

“When I first went to Syria in 1994, it was a middle-income Arab country with an extraordinary heritage and hospitality but few political freedoms,” she said. “I’ve been visiting Syria since then, and if I stopped going, it would be saying that this part of my life doesn’t matter anymore. But it is hard, very hard, to see what has happened there.”

There have been a few signs of hope in Syria. Doucet recently visited the Syrian city of Homs, which saw some of the worst ghting of the war. She found some signs of life beginning to re-emerge now that the main battles have ended with the government back in control.

“The stores and cafes were full; the kids were taking swimming lessons, but other parts of the city are in utter ruin,” she says. “There’s a gaping wound that is still very raw. So many Syrians who protested or took up arms were forced to flee and they fear they’ll never be able to return.”

Doucet has seen so much suffering in these conflicts that she has learned to take a break from international news when she isn’t on the job. She also takes time to contemplate her own good fortune for being born a Canadian. 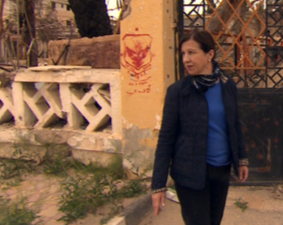 “You can’t help but live with a profound sense of gratitude,” says Doucet, who was appointed Officer of the Order of the British Empire, along with many other recognitions. “It’s being grateful for being able to live in places where there is the rule of law, as well as peace and tranquility. I’m acutely aware that it could have gone the other way.”