Janine di Giovanni rarely goes to press conferences. Whether she’s reporting a story from Iraq, or Syria, or Sierra Leone, she begins her work by mapping villages and how the people are related to each other. 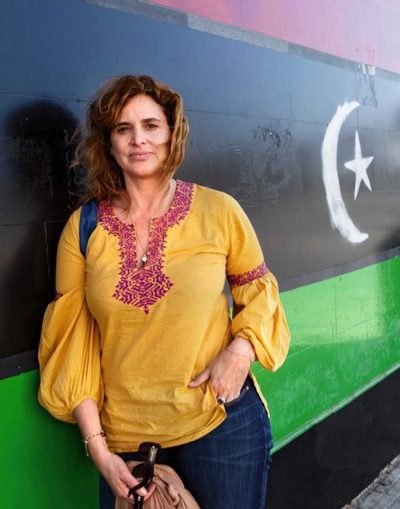 “I’m much more of an anthropologist or a sociologist than I am a reporter,” she acknowledges. “If I’m going into a village in Northern Iraq, working on the disappearance of Christians, it’s helpful to know how the families are connected. If you want to get the whole narrative, you need to go deep into people’s lives and situations. That’s where the truth lies.”

During a career spanning more than 25 years, di Giovanni has reported from dozens of war zones, including Syria, Iraq, Afghanistan, Sierra Leone, and many more.

But one of her most memorable experiences was working as a reporter during the Siege of Sarajevo in 1992. As she described in a 2012 TED Talk, a friend was walking to work one morning when she saw a tank driving down the city’s main street, running over everything in its path. It was surreal. A few weeks later, this woman handed her infant to a stranger on a bus to get him out of the city.

Janine di Giovanni is currently a Fellow at Yale University’s Jackson Institute of Global Affairs where she teaches classes on human rights and war reporting. She has also written numerous books, including The Morning They Came for Us: Dispatches from Syria.

“As a foreign correspondent, I find the Middle East endlessly fascinating. The ancient world, the literature, the people…there is always so much happening there. It’s never quiet,” she says. “I’ve been going there for nearly 30 years and it never ceases to inspire me.”

In 2016, di Giovanni was awarded the Courage in Journalism Award from the International Women’s Media Foundation for her distinguished work in war zones. Across the cultures and the continents, she’s found similarities within countries at war.

“The purpose of war is to destroy the fabric of society. They attack the institutions—law, freedom of expression, human rights—and besiege people with lack of water, food and electricity,” she explains. “All of your trust and faith in fellow human beings disappears because you may be attacked by your neighbours or your friends. The social contract is broken.”

Di Giovanni says she was particularly haunted by her experience in Rwanda, where one million people were slaughtered in a five-month period in 1994. But she continues to report on conflict.

“I get sad and traumatized, but I would never give up, because I’m not the victim of war crimes as they are,” explains di Giovanni. “This work is partially a calling, but also my duty to humanity.”