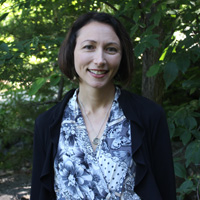 Miranda J. Brady is an associate professor in the School of Journalism and Communication and cross-appointed with the School of Indigenous and Canadian Studies. She holds a Ph.D. from Pennsylvania State University in Mass Communication with a minor in Social Thought.

Miranda J. Brady’s work takes a critical/cultural approach and explores the construction of identity in the media and other cultural institutions. Her work over the last several years has focused on Indigenous identity and media, and her more recent research is situated in Critical Autism Studies. Dr. Brady is a settler who lives on unceded, unsurrendered Algonquin territory and has direct experience with autism in her family.

Dr. Brady’s current research explores the intersections of autism and the entertainment industry. She explores cultural sites that shape perceptions of autism spectrum disorder (ASD), from the Diagnostic and Statistical Manual of Mental Disorders (DSM) to shows on Netflix and Broadway plays. She looks to shifting definitions of ASD to understand it as a culturally and historically contingent phenomenon that relates (sometimes tangentially) to lived experiences. Her project explores the ways in which various players, economic interests, cultural form, institutions, and identity politics shape cultural mediations of ASD.

Brady, Miranda J. (2011). Subjectivity through Self-Education: Media and the Multicultural Citizen at the National Museum of the American Indian. Television and New Media, 12(5): 441-459.