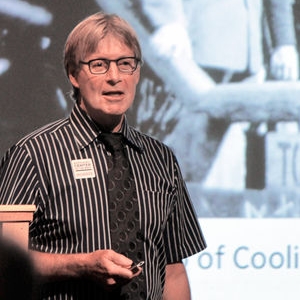 Ross Eaman holds an Honours B.A. from Carleton, an M.A. from the University of Toronto, and a Ph.D. from Queen’s University, all in history. He was awarded a Canada Council Doctoral Scholarship and currently teaches courses on comparative discourse analysis and communication and the built environment.

Ross wrote the first Canadian textbook on the mass media: The Media Society: Basic Issues and Controversies (Toronto: Butterworths, 1987). He was research director for the CBC Oral History Project sponsored by the National Archives, the Canadian Broadcasting Corporation, and the School of Canadian Studies at Carleton. With the support of two SSHRC grants, it conducted interviews across the country using graduate students in Canadian Studies as an archival resource for future research. Ross’s own publications on the CBC include Channels of Influence: CBC Audience Research and the Canadian Public (Toronto: University of Toronto Press, 1994) and, more recently, “‘The Story is Only the Platter on Which the Personality is Served’: The Debate Over Media Integrity on CBC Radio’s Literary Arts Programming, 1948-1985,” Canadian Journal of Communication 40, no. 3 (2015), 519-536. His original article on “CBC/Radio-Canada” for the Canadian Encyclopedia has recently been updated by Sasha Yusufali and Sharon J. Riley. He has also contributed entries such as “Bureau of Measurement” and “Wayne and Shuster” to the Encyclopedia of Television. In addition to submissions to the CRTC, Ross has given evidence to the Standing Committee on Canadian Heritage and served as a member of the advisory committee for the Auditor General’s Special Examination of the CBC, for which he developed a method for assessing the relative distinctiveness of CBC English TV programming.

In the early 2000s, Ross was invited to write as a solitary author a mini-encyclopedia on the history of journalism from the acta diurna in ancient Rome to the present day. The result was the first edition of the Historical Dictionary of Journalism (Lanham, MD: Rowman and Littlefield, 2009) – No. 4 in the Historical Dictionaries of Professions and Industries series. Following the invitation of the publisher, Ross has since completed a substantially revised, updated, and expanded second edition. With contributions from colleague Randy Boswell, it is scheduled for publication in April 2021 (see publication notice below).

In addition to writing reviews such as “The Neo-University,” Topia: Canadian Journal of Cultural Studies, no. 28 (Fall 2012), 245-250, Ross has been a regular participant at the annual conference of the Canadian Communication Association, his presentations including “Media History and the Problem of Periodization” (Montreal, 2010), “Emerson, James, and Rorty on Communication and Moral Progress” (Kitchener-Waterloo, 2012), “Mapping the Universe of Discursive Sites: A Burkean-Based Cartography” (St. Catharines, 2014), “How Do Buildings Mean? A New Approach to Communication and the Built Environment” (Ottawa, 2015), and “Selling Modern Architecture through Film: The Mechanical Rhetoric of the National Film Board” (Ryerson, 2017).

One of Ross’s current teaching and research interests is communication and the built environment. Over the course of several summers, he travelled to Custer State Park, Yellowstone National Park, and Yosemite National Park to conduct on-site research on parks from this perspective. Some of this research was presented as Five Speeches, Five Eras: Presidential Perspectives on Yellowstone, a public talk at the Buffalo Bill Center of the West in Cody, Wyoming, on August 12, 2014 (photograph above courtesy of Raymond Hillegas, Cody Enterprise).

Ross is currently completing a manuscript entitled Architecture as Communication: How to Critique the Built Environment for publication in 2222 or 2223.