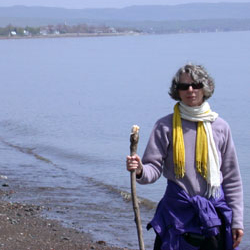 Michèle Martin has a Ph.D. in sociology from the University of Toronto, an M.A. from the Université de Montréal and a B.A. from the UQAM, both in communication. Her research is in the historical sociology of technological development, political economy of communication and socio-cultural analysis of the media. Her particular area of interest is the political economic development of forms of communication and their impact on society. Her latest book, Images at War: 19th Century Illustrated Periodicals and the Development of National Identities (University of Toronto Press, 2006) is an analysis of the way the editors of 19th century periodicals used pictures both to disseminate national ideologies and to create and maintain a readership. Her other books include: Victor Barbeau, pionnier de la critique culturelle journalistique (Presse de l’université Laval, 1997), and Hello Central? Gender, Culture and Resistance in the Formation of Telephone Systems (McGill-Queen’s University Press, 1991). Her articles appear in such journals as: Réseaux, Histoire sociale/Social History, Labour/Le travail and Journal of Communication Inquiry. She also presented many papers in various international conferences.

She teaches: the political economic development of communication technologies, socio-historical study of the media, politics of visual representation, feminism and communication theories.