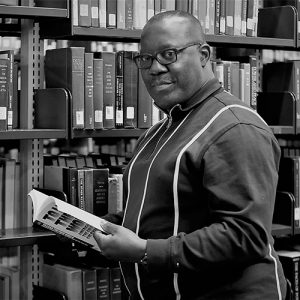 Nduka Otiono is a writer, Assistant Professor and Graduate Program Coordinator at the Institute of African Studies, Carleton University. He is the author and co-editor of eight books of creative writing and academic research. Prior to turning to academia, he was for many years a journalist in Nigeria, General Secretary of Association of Nigerian Authors, founding member of the Nigerian chapter of UNESCO’s Committee on Oral and Intangible Cultural Heritage, and founding member of the Board of the $100,000 annual Nigerian Prize for Literature.

A Fellow of the William Joiner Centre for War and Social Consequences, University of Massachusetts, Boston, his interdisciplinary research focuses on popular urban narratives in postcolonial Africa, and how they travel across multiple popular cultural platforms such as the news media, film, popular music, and social media. Beyond the cultural relevance of such little genres of everyday life also known as rumours, urban myths or legends, Otiono explores their political relevance and incarnation as “street stories” and how everyday people speak to power through such informal channels. His research draws from his background as a journalist and cultural activist in Nigeria. His research interests span Cultural Studies, Oral Performance and Literature in Africa, Postcolonial Studies, Media and Communication Studies, Globalization and Popular Culture.

His creative writing publications include The Night Hides with a Knife (short stories), which won the ANA/Spectrum Prize; Voices in the Rainbow (Poetry), a finalist for the ANA/Cadbury Poetry Prize; Love in a Time of Nightmares (Poetry) for which he was awarded the James Patrick Folinsbee Memorial Scholarship in Creative Writing. He has co-edited Wreaths for a Wayfarer: An Anthology of Poems in Honor of Pius Adesanmi (2020); Camouflage: Best of Contemporary Writing from Nigeria (2006); and We-Men: An Anthology of Men Writing on Women (1998).

Otiono obtained his doctorate in English and Film Studies from the University of Alberta where he won numerous awards including the Izaak Walton Killam Memorial Scholarship, and was nominated for the Governor General’s Gold Medal for academic distinction. He has held postdoctoral fellowships at Brown University where he was also appointed a Visiting Assistant Professor and the Banting Postdoctoral Fellowship at Carleton University.

His professional honors include a Capital Educator’s Award for Excellence in Teaching, a Carleton University Faculty of Arts and Social Sciences Early Career Award for Research Excellence, twice winner of the Carnegie Africa Diaspora Fellowship, and a 2018 Black History Ottawa Community Builder Award.