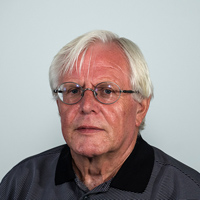 One of Klaus Pohle’s proudest moment as a journalist came during the 1968 Alberta provincial election when Peter Lougheed, before he became the premier of Alberta, walked out on him during a press conference because he didn’t like the questions he was being asked.

Born in Germany, Pohle began his journalism career at the Canadian Press in Edmonton as a copy boy for the princely salary of $35 a week. He swiftly moved on to The Red Deer Advocate, where he covered everything from the courts to politics before becoming city editor. He then decamped to The Lethbridge Herald as news editor. Quick promotions followed to assistant managing editor, then managing editor.

When Thomson Newspapers took control of the Herald in the early ‘80s, Pohle took the opportunity to jump ship, feeling the time was right for a move he had been considering for some time: a return to university.

After 18 years as practising journalist, he came the school at Carleton as a graduate student, graduating in 1984 and forever leaving behind his high school goal of becoming an embalmer. But not entirely. One of his hobbies is visiting cemeteries. In his spare time, Pohle teaches now media law and newspaper production.

He was supervisor of Undergraduate Studies for 22 years until his retirement from that particular job in 2015.