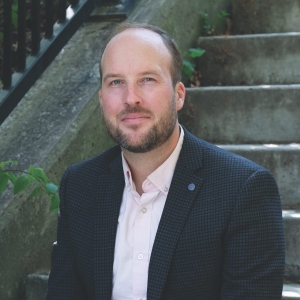 Brett Popplewell is an author and journalist who joined the school in 2017. His articles have been recognized by the National Magazine Awards Foundation in best short feature, profiles, investigative reporting, longform writing, sports and travel.

He has written for Bloomberg Businessweek, Mother Jones, The Canadian Press, The Globe and Mail, Toronto Star, Sportsnet, Maclean’s, The Walrus and more. His work has also appeared in The Best American Sports Writing, Best Canadian Essays and has been produced into documentary features for broadcast. He is the co-author of The Escapist: How One Man Cheated Death on the World’s Highest Mountains. (HarperCollins Canada, 2016).

He studied the History of International Relations at the London School of Economics and is a graduate of the Columbia Publishing Course in New York. He completed his undergraduate studies at Carleton. Prior to joining the faculty, he taught at Ryerson University and served as a Bureau Chief with the Fellowship in Global Journalism at the Munk School of Global Affairs. He is the founding director of the Future of Journalism Initiative and currently serves as executive director of the Gordon Sinclair Foundation.