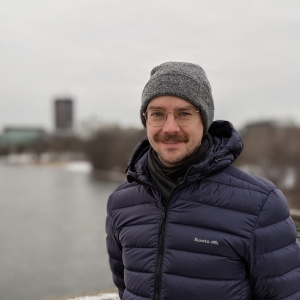 My research and teaching span four overlapping areas: media theory, infrastructure studies, philosophies of technology and information, and critical internet studies. I work within what is sometimes called the “civilizational” stream of media theory, typified by Harold Innis, Marshall McLuhan, and Walter Benjamin. This stream understands media as crucial sites of power and struggle, seeks to expand the historical scope and corpus of intellectual resources with which we consider them, is deeply committed to the materiality of technologies and techniques, and overlaps in significant ways with literary studies. In 2020, I helped organize a conference, “Into the Air,” that explored many of these themes.

A broad interest in how human societies hold together across time and space leads me to research and teach across a range of topics and time periods—from early modern double-entry bookkeeping and state bureaucracies to 20th century pop music charts, Amazon warehouses and just-in-time supply chains, the culture and media of financialization, sports and/as media, Y2K and the first dotcom crash, and the North American fur trade of the 17th and 18th centuries. In each case, I am interested primarily in questions of epistemology (how we know about these things) and infrastructure (how they are built into and operate in the world) over those of representation or consumption.

My first book, List Cultures: Knowledge and Poetics from Mesopotamia to BuzzFeed (Amsterdam University Press, 2017) explored these themes by tracing the list as a cultural technique of administration and imagination. My current book project is on the history of salt and positions sodium chloride as a medium of culture and civilization. I developed this project as a 2018 Research Fellow at the Internationales Kolleg für Kulturtechnikforschung und Medienphilosophie at the Bauhaus-Universität Weimar.

I am available to supervise graduate students working in the areas of media theory and archaeology; infrastructure and paperwork  studies; digital culture and internet studies; popular music and culture.

Young, Liam C. 2019. “The Innis-McLuhan Field: In Search of Media Theory” Canadian Journal of Communication (special Issue on “Many McLuhans”).