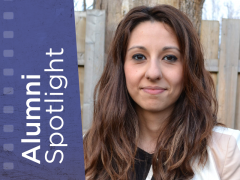 Maral Mohammadian is a producer at the renowned National Film Board of Canada’s Animation & Interactive Studio. She has produced over 30 shorts which have garnered awards at festivals such as TIFF. Credits include The Weatherman and the Shadowboxer by Randall Okita, Deyzangeroo by Ehsan Gharib and Shannon Amen by Chris Dainty, as well as international coproductions Hide by Daniel Gray (Hungary/France) and Impossible Figures and Other Stories I by Marta Pajek (Poland). Maral has helped to develop some of Canada’s top rising talents through the NFB’s Hothouse apprenticeship program, which has spawned a series of one-minute hits. In addition to films, she has produced interactive projects with a distinct artistic edge, such as Paloma Dawkins’ acclaimed VR work, Museum of Symmetry. The National Film Board of Canada is Canada’s public film and digital media producer and distributor. It has received more Academy Award nominations than any film organization in the world outside Hollywood. NFB Animation has garnered 7 Oscars® and is renowned for world-class, creator-driven animation.

LILY: Lets start with a soft introductory question; what are some of your favourite genres and/or areas of interest regarding film?

MARAL: I don’t think in genres really. I’m open to anything that’s honest and believable. I watch a lot of British comedy, documentaries of all kinds, indie films. Animation has a special place in my heart because it’s such a powerful medium of expression and very versatile.

LILY:  What was your overall experience with film studies at Carleton?

MARAL: I was a bit skeptical at first because there was no practical component and I worried about how I would ever find work to pay back my student loans. But I quickly fell in love with the program because it was about history & philosophy through cinema. The classes introduced me to different cultures and traditions, and also to experimental film which blew me away. Experimental cinema talks about the world we don’t see empirically but which we feel and are shaped by. Watching and writing about film with a critical eye and ear meant I got to learn the language and understand how it could be used. The practical aspects of the craft that I longed to learn came through trial and error – a group of us reignited the film club and started putting theory into practice by making our own shorts. We did 48hour film challenges and started a festival and collaborated on each other’s ideas, often borrowing equipment from the more affluent journalism department.

LILY:  What was your original goal going into university and did that change at all during your time at Carleton?

MARAL: I actually started off in the journalism program. But it felt too mechanical for me. My one elective in first year was a film class, taught by Laura Marks. Her passion for underground cinema was infectious – she introduced us to experimental films, African and Asian cinema, neorealism, and just expanded my horizons through film. So my focus switched from learning a profession to learning for the joy of it and letting university be a place of discovery. That’s how I ended up with a minor in music – I just kept taking classes for sheer interest until I had enough credit for a minor. I never expected to get a job in the film industry.

MARAL: I’m a producer at the National Film Board of Canada, in the Animation & Interactive Studio. It’s creative, inventive, unorthodox – all the things that turned me on during university. I get to work with incredible artists from all walks of life on their passion projects. We have the freedom to explore, take risks and try new things. The work is meaningful, sometimes deeply personal. It’s an immense privilege and I’m grateful for it.

LILY: How did film at Carleton help prepare you for that? Or like, influence the path you took to get there?

MARAL: Film studies was a mysterious thing for me during university. As much as I enjoyed what I was learning, I needed to connect it with my world somehow, because I knew I didn’t want to be a teacher or a critic. So I volunteered at film organizations in town, which led to summer jobs and getting to know the scene. Through that I learned what I liked and didn’t like about the industry. In 4th year, I got a coop placement at a wonderful artist-run production centre called SAW Video. They gave me free reign to do whatever I could within the scope of the placement. I curated a screening event which I turned into a self-reflexive multi-screen installation, where the audience became part of the show. Spending time at the coop put me in the hub of Ottawa’s film community and that’s how I discovered the Ottawa International Animation Festival (actually a close friend was doing his coop placement there). I volunteered at that festival so that I could attend screenings for free, and that’s how I stumbled into the wild world of indie animation. I was blown away. They offered me a job and that’s how I met the fine folks at NFB. And eventually they offered me a gig and I moved to Montreal. That turned into many more gigs and eventually a full-time producer position. The work I do now is quite broad – we have a very flexible definition of animation; it often involves live action and hybrid techniques. But it all draws on the fundamentals I learned at Carleton – storytelling, cinematography, montage, performance, POV, technology…even the power and politics behind the scenes.

LILY: I love it! As we’re wrapping up I want to ask: what would you tell someone who wants to study film academically but is unsure about it?

MARAL: I would say, keep an open mind. Studying film is learning many disciplines all at once: art, photography, history, music, politics, psychology, technology, communication, critical thinking. It’s not going to give you an obvious career path but it’s incredibly enriching and the skills you gain are versatile – you can apply them to different industries.

LILY: This has been an enriching and wonderful interview. Is there anything you want to add for our readers?

MARAL: It’s easy to have preconceived notions about what a career in film might be like, or even what aspects of it you think you like or dislike. But you don’t really know until you try. So get your hands dirty – get involved, volunteer, do grunt work, learn DIY. I never would have thought I’d be doing what I’m doing or that such work even existed. It was through meeting great people and being open to new experiences that I’m fortunate enough to be doing what I’m doing. I had a support from good people, so nurture your relationships and remember that filmmaking is highly collaborative. Even if you’re making something all by yourself, staying connected to others will fuel you. And you might land outside production which can be rewarding too, because it’s still about culture and the way we see and shape the world through media.