Home / Blog / What’s International to you? Jasmine in The Netherlands

What’s International to you? Jasmine in The Netherlands

Bachelor of Journalism: Major in Journalism, minor in Communication Studies and Law 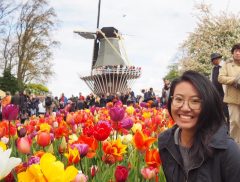 Jasmine at the Keukenhof, an annual tulip garden festival near Amsterdam, featuring some of the The Netherlands’ most iconic trademarks: a windmill and colourful tulips.

After experiencing my exchange abroad, my meaning of international has changed, or at least shifted. I had travelled before and to a great variety of places, but exchange offered me a new experience that I can safely say was incomparable to anything else I had done before.

There is nothing quite like having the opportunity to live in a foreign country while simultaneously having the luxuries of being a young student. Studying abroad puts you in a position where you’re surrounded by almost the exact same people (read: eager, independent, curious… the list goes on). You’re thrust into an exchange community where hundreds of other students have made the same decision as you – to spend a semester abroad. When I moved to Utrecht, The Netherlands, I was thrust into an international community like no other. As well, living there for an extended amount of time and especially in Europe meant that I could take advantage of the abundance of budget airlines and inexpensive hostels. I explored the Netherlands at my own pace, and since I was in such close proximity to dozens of other countries that were less than a two-hour plane ride away, I spent much of my free time also travelling Europe. It was a completely different experience than if I was to visit Europe in shorter vacations at a time. And so in making new international friends and arranging my own travels (by the end, I had visited 15 countries and dozens of cities) I gained an experience that was nothing short of humbling and enlightening.

As the end of my exchange loomed closer, my friends and I reflected on our time in The Netherlands. We had lived there for nearly half a year and grown to love the country. We all admitted that we grew so much from the experience. Our eyes lit up whenever we shared stories from our recent travels and we could not help but come to the conclusion that the saying, “The more you travel, the less you’ve seen,” was nothing but true. Now, we looked forward to visiting more places than we could count.

In school and in geography class, you learn that the world is big. We learn about all the countries, the different continents, and of the various oceans and mountains that make up our earth. But exchange became a geography class in itself. By seeing more parts of the world, we got a master class in culture, in architecture, in history, and more. Before, I knew what international meant, but now I felt that I had lived it. By seeing more parts of the world, my friends and I realized the true vastness of planet Earth, and we viewed seeing the rest of it as a welcome challenge.