The Holocaust museum in Montreal was the most moving part of the trip. The specific aspect that stuck out the most to me was not necessarily the Jewish communities’ response to the Holocaust, but the global, and especially Canadian ones.

The global response was largely one of apathy and dismissal. Most countries ignored the pleas before the Holocaust, coming from Jewish refugees in Europe. “Thus the world seemed to turn its back on the German and Austrian Jewish refugees”. It is important to 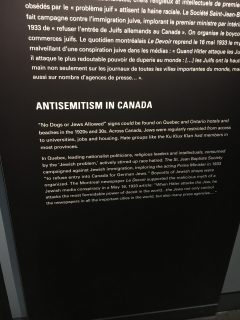 note that all of this happened before the Holocaust had begun, as the Anti-Semitism in Europe was deeply rooted, sourced back to at least medieval times.

The global response to the plight of European Jews exacerbated what was already a nearly overwhelming problem. In Canada, the response was also extremely negative. Phrases like “No Dogs or Jews Allowed” dehumanize Jews, a tool that the Nazi’s in Germany were using in their propaganda too, calling Jews untermensch, or subhuman. Also included in this group of subhumans were the elderly “… this practice has reached tremendous proportions: recently the inmates of old-age homes have also been included. The basis for this practice seems to be that in an efficient nation there should be no room for weak and frail people”. By combining Jews, Gypsies and others with the elderly and the mentally ill, the Nazi’s sought to reduce them in stature even further, in a way attempting to prove that they could not exist in an efficient society, as they were less capable than those of a pure race. Seeing the same tools wielded in Nazi Germany, and in the Canada of the time is startling. 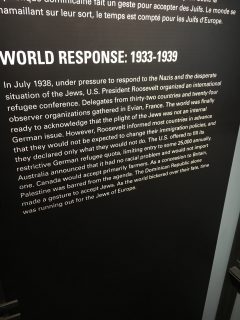 But more than that, seeing some of the rhetoric surrounding modern day Syrian refugees, and the Jewish response to the crisis really brings home the phrase “Never Forgot”, so commonly associated with the Holocaust. The most direct example I could recall while in the museum itself was from last year, when a leading candidate in the US Republican primary used the same language, dogs, to refer to the refugees, “For instance, you know, if there is a rabid dog running around your neighborhood, you’re probably not going to assume something good about that dog… doesn’t mean that you hate all dogs by any stretch of the imagination.”. While this is obviously an example from the United States, the refugees were a key issue in our own election in Canada. Something stuck out at me, however, which was the number 25,000, which was the number discussed and argued about over the course of our election cycle. One of the plaques at the Holocaust museum (left), states “The U.S. offered to fill its restrictive German refugee quota, limiting entry to some 25,000 annually.”

The Jewish community has not ignored these similarities, and in the spirit of remembering its own plights less than a hundred years ago, has responded much more positively to the refugees than the general populous of the western world. I’ve spent a fair amount of space on this comparison, and that’s because it really shook me. During the elections, I was very on the fence about the crisis, but through most of the visit to the Holocaust museum, it was the main thing on my mind, and it drastically altered my views on the topic. If the goal of the museum is to remind people of the past, and teach new generations so that they don’t make the same mistake twice, it had a big success that day.

The questions raised by Jews after the Holocaust, especially the ones concerning Theodicy, are difficult. How can a God who is good, allow such an atrocity to happen, much less to his chosen people? Scholarly thought is tremendously split on the topic. While the responses are varied, they split into subheadings. First, that theodicy is possible, second that theodicy is not still possible, and finally, that humans cannot understand the will of God, as so cannot comprehend why it needed to happen.

From hearing about it firsthand from Dr. Hecht, to seeing the Holocaust Museum in Montreal, to watching the video of other survivors in class, the horrors of the Holocaust seem to grow the deeper into study I went. The Museum was a different, and extremely valuable take on the Holocaust, as it talked about the prelude to the event, as much as the years it occurred over. It helped put into perspective how isolated the Jews of Europe were, and how much hatred had been built up over the centuries.

One of the most personally interesting parts of keeping Kosher to me is how much the difficulty changes depending on circumstances. When I thought about doing it for the Living Judaism assignment, I felt overwhelmed, and decided against it. However, when I stayed with my Orthodox Jewish friend, it was natural. The food in the fridge can be assumed to be Kosher, he knows what is fine at grocery stores, and when we go out for food, he tells me a few options nearby, just like normal. In short, keeping Kosher is much easier to handle when you have a network of people also keeping Kosher, because it just starts to feel normal. Jumping right into it is extremely difficult.

The hardest part for me was, and always has been, one specific clause from the Torah “You are not to boil a young goat in the milk of its mother”. If I’m being honest, this is because of a love of cheeseburgers. It is how hard it is to give up food you love that makes it so challenging to start keeping Kosher. Many of the sources I found online on how to do it, recommended half-steps to get you started, rather than going the whole way all at once.

Cheeseburgers aside, the helpfulness of a network naturally means that keeping Kosher is going to be much easier in cities, especially ones with large Jewish populations, rather than in rural areas. Montreal in particular, with its Jewish history and large Jewish population, seemed significantly easier to keep Kosher in than even Ottawa. Ottawa is hardly a rural area, yet just the lack of density of Jews results in a lack of kosher restaurants and resources.

When we were speaking with the Rabbi at the end of the day in Montreal, Pot de Luzy came up as a kosher restaurant. His reaction was very interesting to me. He was surprised that there was a kosher restaurant he had not heard of, and immediately looked it up. That would not be my reaction to a new restaurant in my area, which made me remember that keeping kosher is done as much for the culture as it is for religion. Food is one of the identifiers that can be used to mark a cultural identity. While many cultures in the western world have been assimilated, keeping Kosher has kept Jews somewhat distinct in this regard. It provides a sense of common community, and preserves a sense of culture.

One thing that had never occurred to me until I started researching this topic was the possibility of incorrect Kosher markers, “Kosher certification, however, was not always so reliable. Fraud and corruption plagued kosher meat production in the United States from the mid-1800s to the mid- 1900s”. Given the trade between the US and Canada, one should assume that some of this food, which was marked Kosher, made its way to Canadian Jews. This brings up the question of what the punishment or reparations are for consuming unfit food, even if accidental. The first mention of a punishment is in the Talmud, “If a person ate a limb from it whilst alive, he does not suffer forty stripes; and the slaughtering therefore does not render it clean. Now if you were to hold that there must be an olive’s bulk, then guilt is established because of eating an olive’s bulk”. A punishment consisting of 40 lashes is unlikely to be applied in the present day, but no updated punishment has been prescribed, as the modern sects of Judaism tend to stay away from punishment for transgressions, instead caring more about atonement. 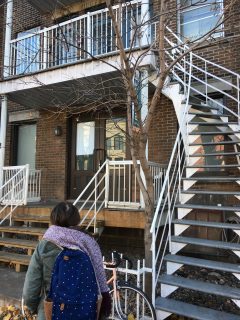 During the walking tour through Hasidic Montreal, it felt like we were seeing a different world from the one around us. I could have easily walked those same streets on my own, and thought nothing of the culture and history within the walls of the houses beside me. The house pictured left would have just been a house like every other on the block, not a hidden synagogue that can house 500.

The reasons behind the hidden nature of the synagogues was fascinating to me too, an intersection of traditional faith, and modern zoning laws. When studying religions and history, it can be easy to mire it completely in the past, and forget how present these topics are to so many people. The walk through Hasidic Montreal really reminded me of that.

The bylaw which prevents new places of worship in the Outremont borough of Montreal was put to a referendum in November of this year, where the bylaw was sustained. This is a small example of the strains the form between very isolated communities and cultures, like Hasidic Jews, and a multicultural, secular society like Canada. Another example is teaching at schools, where traditional Hasidic teaching will not necessarily match the Quebec school curriculum, and this leads to yet more tension.

The history of Jews in Canada follows a pattern. A small number come over, then more come over, and in the more conservative sects, the population increases rapidly due to family sizes. The history of Hasidism follows much the same pattern, but finding the initial starting point has proven challenging. The best I could find is that Hasidic Judaism came to North America between a few years before the Holocaust, and right at the start of it “… the account of the local Hasidic community traces its origins to the nine Lubavitchers who arrived in 1941, and makes no mention of any Hasidic infrastructure before that year”. However, that same article later talks about some evidence of earlier Hasidic Jews in Canada. This evidence is scant for the origins of Hasidic Judaism in Canada, but it seems like they arrived at the earliest in the early 1900’s.

One of the core pillars of Hasidism is that you should experience joy through prayer and giving yourself to God. While doing research, I found a passage from Maimonides which talks about the same thing “The joy one feels while performing the mitzvot, and for the love of God Who commanded them is a great service. One who abstains from such rejoicing deserves to be punished”. This very thought, of the joy of performing the mitzvot of prayer is central to Hasidic Judaism “The Rabbis said: ‘One must not rise to pray in sadness, only in the joy of performing a mitzvah’”. Hasidic principles come down from Rabbi Israel Baal Shem Tov, the founder of the Hasidic movement. The focus is on loving other Jews, and committing yourself to a study of the Torah. This has resulted in a very isolated, but tightly knit community over the years, as their ultra-orthodox stance doesn’t allow for many, or swift, adjustments to fit modern life in a secular country like Canada.