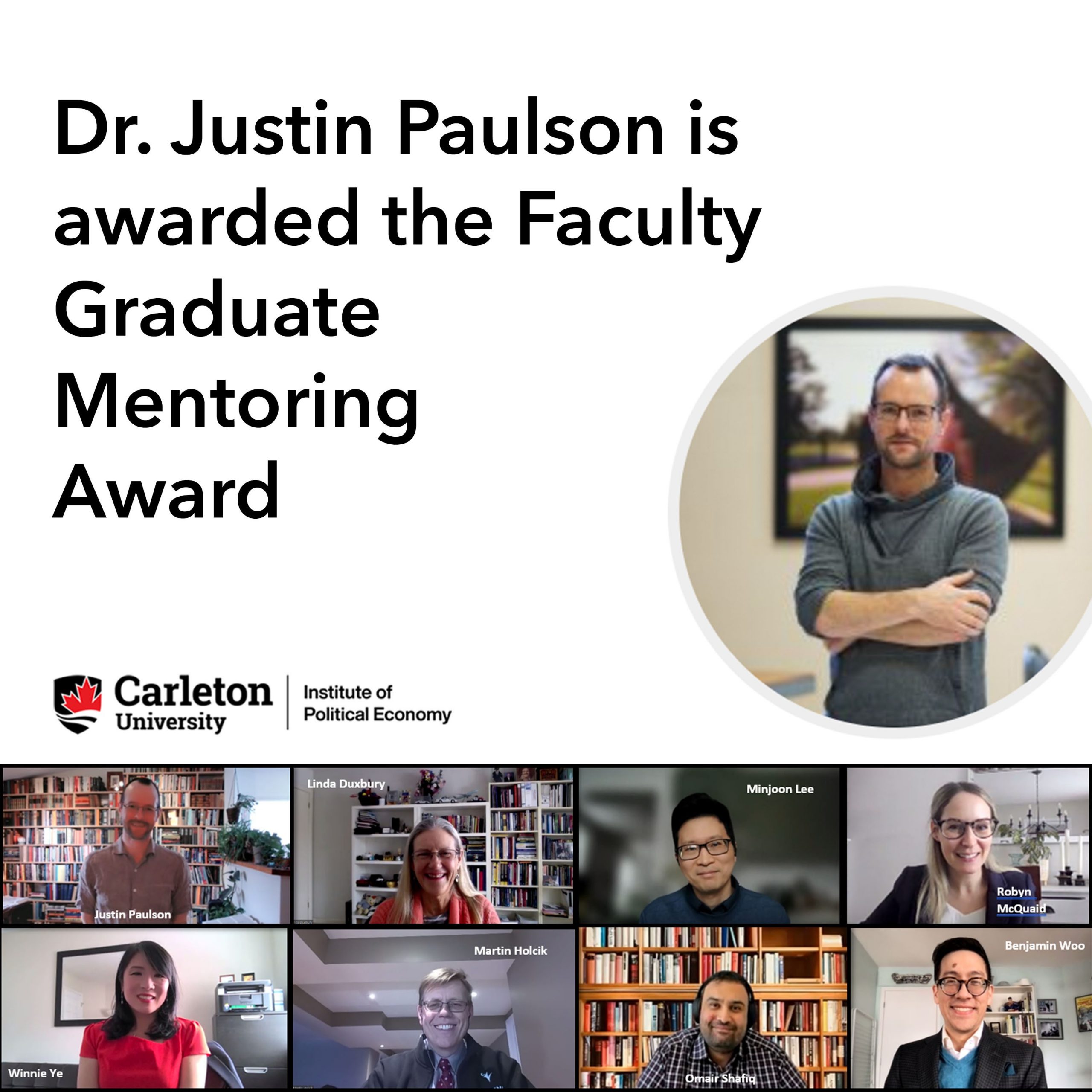 The Institute of Political Economy (IPE) is delighted to share that its current Director, Dr. Justin Paulson, is one of this year’s recipients of the Faculty Graduate Mentoring Award.

Sponsored by the Faculty of Graduate and Postdoctoral Affairs and the Office of the Vice-President (Research and International), this student-nominated award recognizes faculty who “render exceptional service to graduate students as supervisors and research mentors”. Dr. Paulson received this honour alongside seven other exceptional faculty from across Carleton, who have had a profound impact on graduate student experience and success.

Dr. Paulson, who is also an Associate Professor in the Department of Sociology and Anthropology, has been at Carleton University since 2008. His research, lectures, and writings address questions of critical theory and intellectual history, social change, and political economy. In January 2021, he followed Dr. Cristina Rojas (another recipient of the award) as Director of the Institute of Political Economy. Within the Institute he has taught both PECO 5000: Theories of Political Economy and PECO 6000: Core Concepts in Political Economy, the mandatory core theory courses of the Institute’s flagship MA program and  , respectively. He is a friendly, familiar face to all IPE students—present and future, as those who submitted thoughtful, candid nomination letters in Dr. Paulson’s favour recognized.

Professor Paulson was nominated by 4 Carleton University alumni—three of whom graduated from the Institute’s MA or Collaborative PhD programs (and in one case, both).

Among faculty teaching awards, the Faculty Graduate Mentoring Award is unique in that it does not accept self-nominations.  It recognizes successful and often lasting mentorship, initiated by students who have experienced it. In their nomination letters,  Dr. Paulson’s former students speak to his rigour as an educator, and the supportive guidance and mentorship he provides his students inside and outside the classroom.   As Professor Paulson remarks, “this is the most personally meaningful of Carleton’s teaching awards, and I’m honoured to join a long list of previous recipients who teach in or supervise students for the Institute.”

Indeed, Prof. Paulson is only the latest of the Faculty Graduate Mentoring Award winners who is cross-appointed to the Institute.  Eleven of IPE’s faculty from across Carleton’s Faculties of Public Affairs and Arts and Social Sciences, including two former IPE Directors, have received this honour since 2010—an impressive showing for the Institute, and an indication of its merit as a one-of-a-kind learning environment.

Dr. Susan Braedley was the last faculty member from the Institute of Political Economy faculty to receive the award in 2019. A cross-appointed faculty member from the Department of Social Work, one of her student nominees noted that Dr. Braedley “enacts with students as much as with colleagues a practice of intellectual collaboration and sharing, and an ethic of care and rigor”.

Of Paulson’s recent award, Dr. Braedley says she’s not surprised so many faculty from IPE have received this award. “The culture of the Institute is one of ensuring we encourage, challenge, and support each other,” she says. “For me, teaching/learning relationships are intrinsically important—they are the foundation for a vibrant, politically engaged intellectual community. For the amazing students who nominate us, I expect it is the same.”

Dr. Marie-Eve Carrier-Moisan, who is cross-appointed with The Department of Sociology and Anthropology, was presented the Faculty Graduate Mentoring Award in 2018, only a few years after arriving to Carleton University in 2012, and the Institute shortly thereafter. She echoes Dr. Braedley, citing its strong culture of mentorship: “This award reflects what we collectively value, both as students and as faculty members.”

Past recipients of the Faculty Graduate Mentoring Award from the Institute of Political Economy are as follows:

Prof. Paulson follows in the footsteps of these faculty—all of whom, by their dedication to student success, contribute to the supportive intellectually rigorous culture of the Institute.

“I was honoured and humbled by the nominations; but I would also want to highlight how much of graduate mentorship is a two-way street, in that I’m always learning so much from my brilliant students,” Paulson says. “It is an honour and a privilege to guide students through their research, and is far and away the most rewarding part of my job, leading in some cases to years-long friendships and collaborations.”