Cindy Tran had no idea what was in store when she wrote a blog post about a racially-motivated attack on her grandmother. 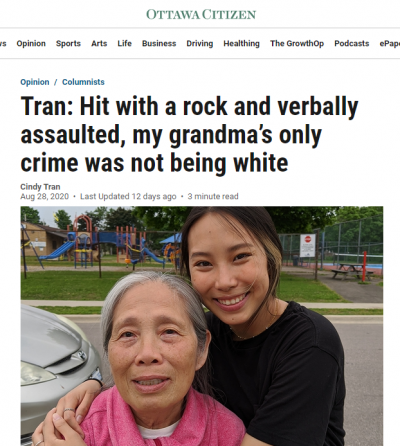 Tran, a first year Master of Journalism student, received a call on Aug. 20 that no grandchild hopes to get. Her 80-year-old grandmother Thi Nga Doan had been verbally and physically assaulted by a group of teenagers at her family home in Pembroke. 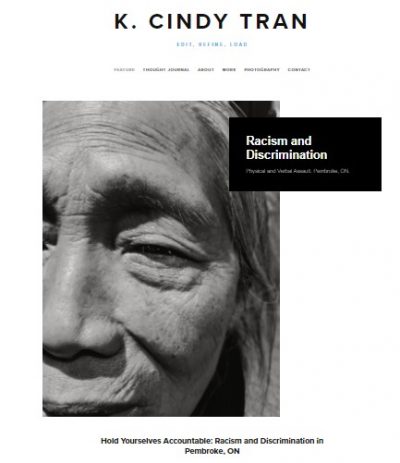 Doan was yelled at with curse words and racial slurs before she was hit in the face with a stone that bruised her cheekbone and according to Tran, “rendered her blind for a few hours.”

Tran said that initially, she was too upset after the attack to take any action.

“At first, I didn’t want to do anything. I was in a place of anger and I didn’t think my writing would be useful to anyone, that it would be more harmful to anyone if I said anything right away,” she said.

A few days later, she received another call from the Pembroke OPP telling her that the attackers had returned to her grandmother’s house to throw eggs and bang on the door.

“That was when I was completely upset. I said ‘you know what, if I’m going to be a journalism major I need to write something. I need to do something,’” said Tran.

And write she did. On Aug. 26, she posted a heart-wrenching 1,300-word blog about  the experience on her personal website.

“It’s shocking that a town that marches for Black Lives Matter still breeds hate toward people of colour,” the blog read.

Tran said that she has experienced many forms of racism while growing up in Pembroke, a town of 16,000, including a number of micro-aggressions towards her and her family.

“As one of the only Asian families in Pembroke – growing up we were looked down upon. I specifically remember an incident regarding a friend’s parent, they had said, ‘Cindy has nothing, look at her family, if she can be successful so can you,’ ” Tran wrote.

Tran’s blog post reached more than 20,000 readers and sparked an outpouring of support.

Tran said that with a large number of people of colour reaching out to her, she knew her story needed to be shared on an even wider scale. She contacted the Pembroke Observer, the town’s local newspaper, asking them to publish the piece and they said were quick to say yes. 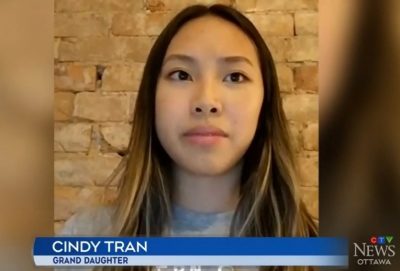 From there, Tran was approached by the Ottawa Citizen to write an opinion piece. She has also been interviewed by 104.9 Pembroke Today’s radio show, the CBC and CTV News. 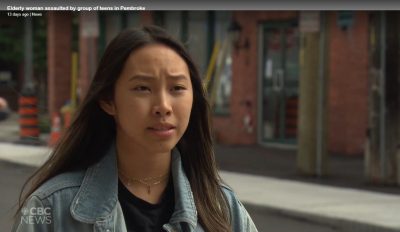 It doesn’t stop there. The day after Tran published her blog, Pembroke Mayor Michael LeMay issued a statement via Twitter.

“Upon reading Cindy Tran’s story this week of the racially-motivated verbal and physical assault suffered by her grandmother, Thi Nga Doan, I was incredibly disheartened, saddened and angered,” the statement read. 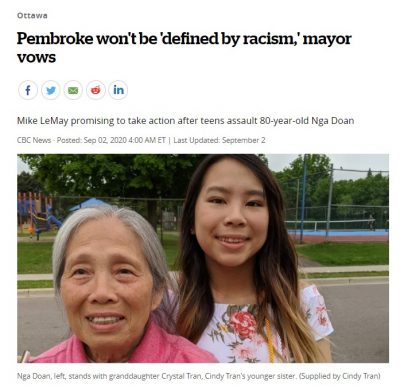 Tran said that LeMay personally reached out to her to give her updates on how city council will be handling the issue of racism. He told her that she would have a position in dealing with the matter.

Tran has also begun working with Pembroke’s Local Immigration Partnership (LIP) to devise a plan to address racism and discrimination.

“At such a young age I didn’t think I would be able to make a difference or make waves so soon.

“It’s so inspiring to see what journalism can do.”

Andrew Cohen in the Ottawa Citizen: With an uncertain year ahead, Joe Biden succeeds in...

Andrew Cohen in the Ottawa Citizen: With an uncertain year ahead, Joe Biden succeeds in reshaping the U.S. federal courts