During the 20th Annual Kesterton lecture, award-winning journalist and author Tanya Talaga explored the chasm between seeing/saying through the lens of her research into the deaths of seven Indigenous students in Thunder Bay.

Where are we now? How do we move forward? What role should journalism play? 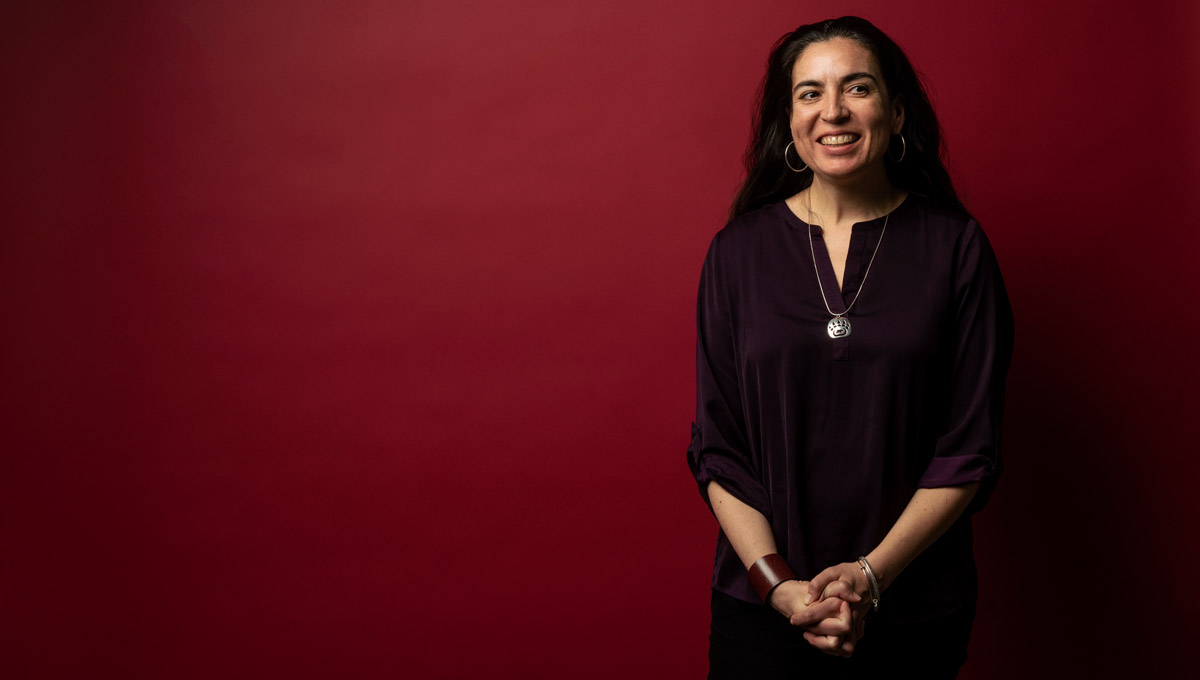 Award-winning journalist and author, Tanya Talaga, introduced the seven fallen feathers with a reporter’s precision and the affection of a doting aunt.

Those precious lives, chronicled in her first book, Seven Fallen Feathers: Racism, Death, and Hard Truths in a Northern City, illuminated the difficulties Indigenous youth still face. Talaga talked about how she came to write the book and how Elders, sources and grieving family members were integral to the process.

Created in honour of media law and journalism history expert, Wilfred Kesterton, who helped to establish Carleton University’s School of Journalism and Communication, the lecture celebrates journalism education and excellence in Canada and is part of the Faculty of Public Affairs Research Month. 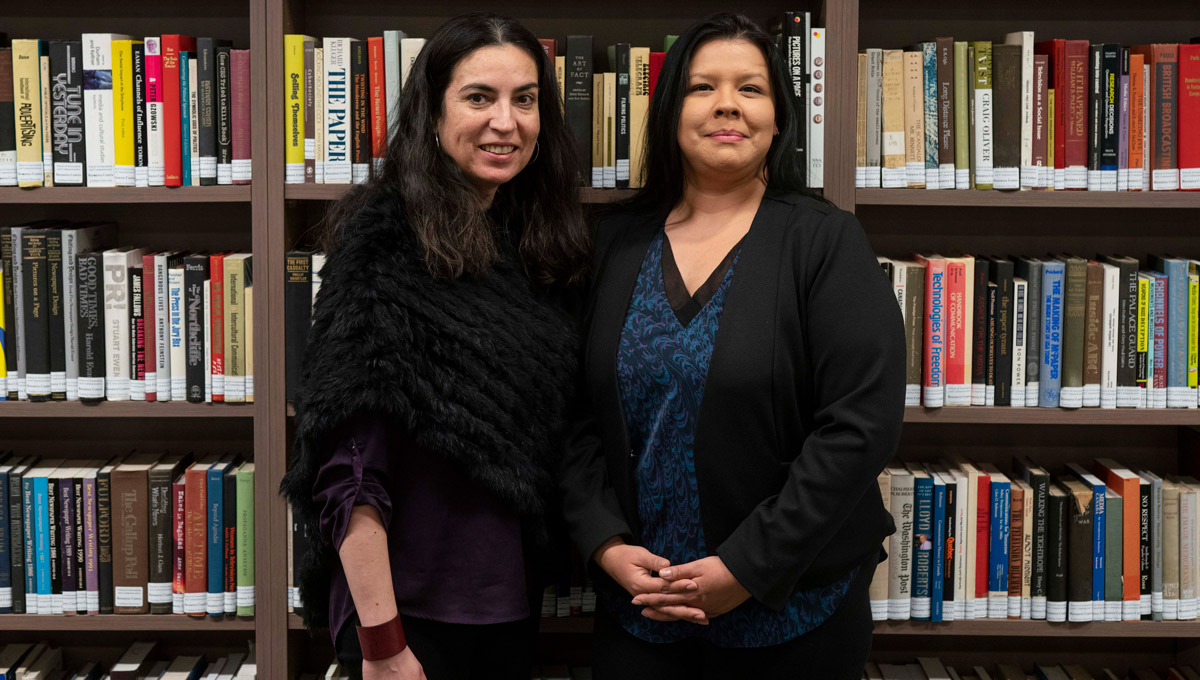 This year, Talaga charted her career path for the audience and tackled what it means to tell stories from an Indigenous perspective.

Talaga, of mixed Polish and Anishinaabe descent, studied Canadian politics and history at the University of Toronto, where she volunteered at Victoria College’s The Strand and wrote and edited the campus newspaper The Varsity. She was hired as an intern at the Toronto Star in 1995.

“When you start in any print newsroom, you do everything,” she said. “You get thrown in. It’s a sink or swim newsroom.”

She covered many beats in her 14 years as a general city reporter before joining the Star‘s Queen’s Park Bureau in 2009. Two years later, she pitched a story in the hopes of covering the federal election.

“I would like to do a story on why it is Indigenous people don’t vote historically in elections,” she told her editor, knowing she would report on the fact that status Indians didn’t receive the right to vote until 1960. 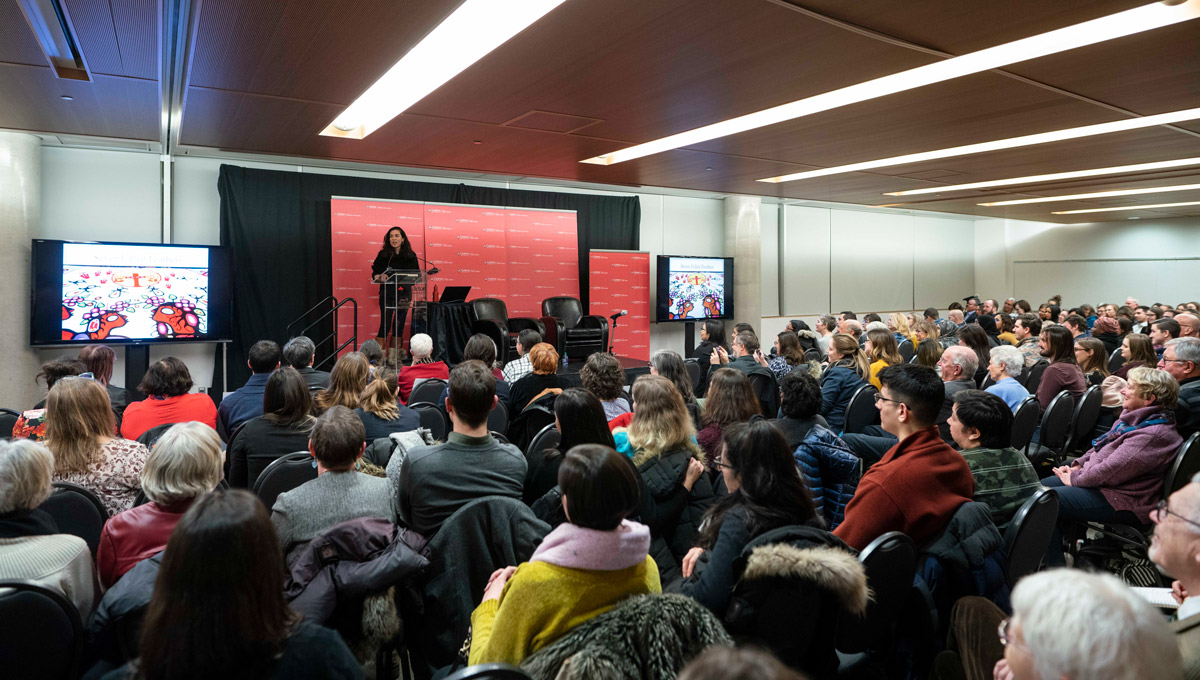 The Disappearance of Jordan Wabasse

The story took her to Thunder Bay, Ont., where Stan Beardy, then grand chief of Nishnawbe Aski Nation (NAN), asked her if she knew about the disappearance of a boy named Jordan Wabasse. He had been missing for 70 days.

“He said to me that Jordan was the seventh student to go missing or to die in Thunder Bay since 2000,” she said. “I was ashamed as an Anishinaabe woman, that I didn’t know this story and that I wasn’t writing about this story. I was ashamed as a journalist. Where were the satellite trucks? How come they weren’t doing stories on these kids?”

To the Star‘s credit, she said, they told her to drop her original pitch and take up the assignment of the disappearing youths. Her piece ran on the front page on May 9, 2011. Jordan’s body was found the next day.

At the Ontario legislature, Talaga began to ask politicians about Thunder Bay, about why children had to leave their homes and communities to get a high school education or basic health care, about the lack of a provincial inquest into the seven deaths.

“It became something I couldn’t let go,” she said. “You know, sometimes stories find you . . .  I knew that in some ways I couldn’t tell the story I wanted to tell in newspaper articles.”

From the mid-1880s to 1996, approximately 150,000 Inuit, Métis and First Nations children were taken from their families, culture and communities in an attempt to assimilate Indigenous people. They were sent away to church-run, government-funded residential schools -139 of them across the country.

In October 1966, Chanie Wenjack, a 12-year-old from Marten Falls First Nation, escaped the harsh conditions at Cecilia Jeffrey Indian Residential School and tried to walk home by following the train tracks. He was found dead near Reddit, Ont., still hundreds of kilometres away from home. A coroner’s inquest into his death played a significant part in dismantling the residential school system.

But even in 2019, said Talaga, children are forced to move away from home, to cities like Thunder Bay, Sioux Lookout, Timmins, and even Ottawa, just to go to high school.

“Think about that. It’s something, of course, that I think about all the time.” 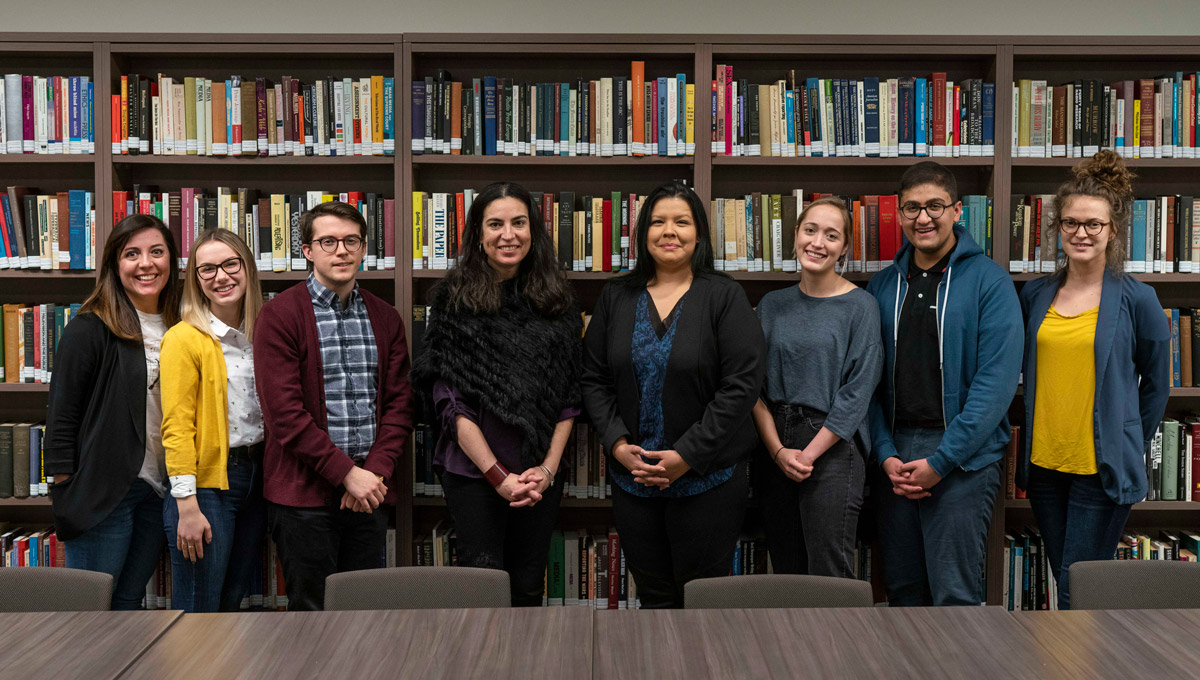 On Not Being a Story Taker

To the journalism students in the room, she passed along a piece of advice from CBC’s Duncan McCue: don’t be a story taker.

“Don’t just go smashing into a community or into a family and take that story, run away, and just never talk to them again,” she said. “You can’t do that. That’s not just for dealing with First Nations, Inuit and Métis families. I would say it’s probably good human practice for anybody.

“If you take the time to actually get to know the family and the community, that comes back to you in many different ways.”

She recounted how Kyle Morrisseau’s father Christian—the youngest son of renowned Woodland artist Norval Morrisseau and a successful painter in his own right—contributed beyond just telling his son’s story.

Once the coroner’s inquest into the seven deaths concluded on June 28, 2016 after eight months of investigation, Christian painted a canvas. Its title, “Seven Fallen Feathers,” not only gave her debut book its name and cover image, it also changed the national conversation about Jethro, Curran, Paul, Robyn, Reggie, Jordan, and Kyle.

“He said: ‘I’m sick and tired of listening to the journalists and to the lawyers, the police, and everybody calling the kids the seven dead students. It’s so demeaning.’

Talaga’s work on Seven Fallen Feathers led her to the 2017Atkinson Fellowship in Public Policy and she became the 2018 CBC Massey Lecturer. Her next book, All Our Relations: Finding The Path Forward, chronicled brutal realities for Indigenous peoples throughout the world, from Canada to Australia and Brazil, from Norway to the United States.

According to the Public Health Agency of Canada, the leading causes of death for First Nations youth and adults up to the age of 44 are self-inflicted injuries and suicide. Each year, one third of all deaths among Indigenous Canadian youth are by their own hands.

“People who do not live in an Indigenous community cannot really grasp what it is like to grow up in an environment where suicide is the norm, where it is a part of everyday existence,” she wrote in All Our Relations. “For too many of these communities worldwide, life is lived immersed in the normalcy of death.” 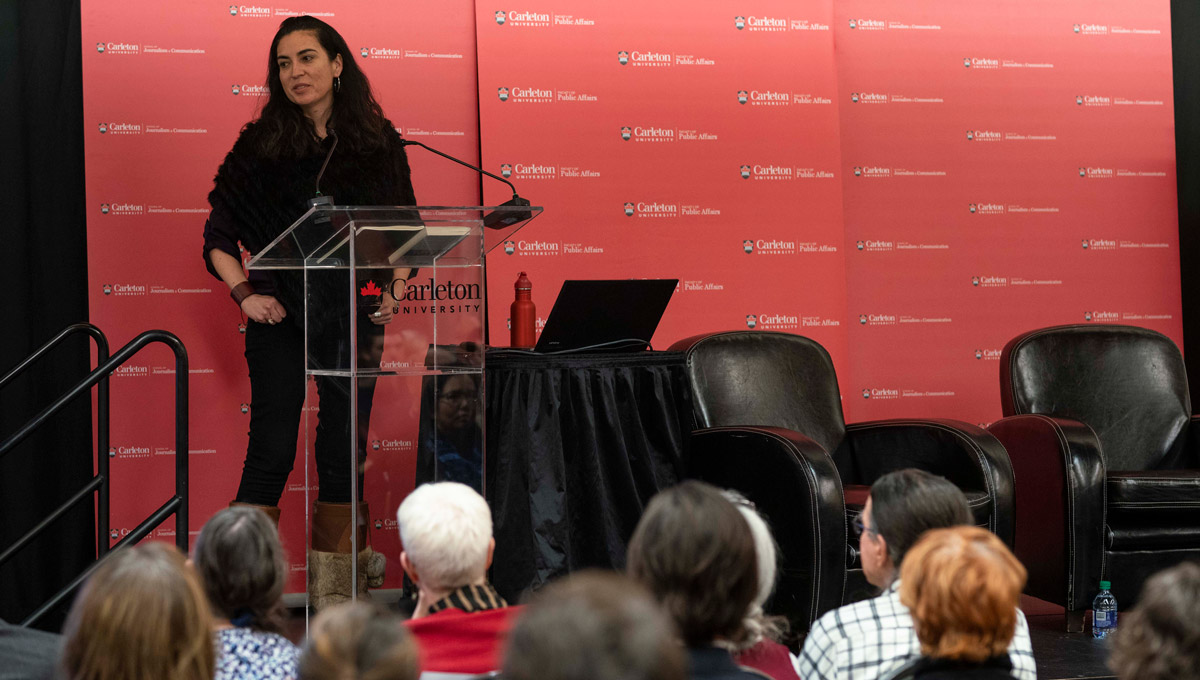 Childhood development features prominently in many of the recommendations.

“What does it take to raise healthy children? This is not rocket science,” said Talaga. “Things like clean water, running sewers, safe housing that’s not mouldy, having parents or someone who loves you that tucks you in at night and tells you that you matter, that you’re going to be somebody someday . . . ”

Nutrition, basic and specialized health care and education are essential. But they are lacking, she says.

“The determinants of health are completely missing in many of our communities. How can this be, in this day and age?”

In conversation after the lecture with APTN‘s Francine Compton, Talaga touched on the responsibilities of journalists and took questions from the audience. Among them was a query about what the average Canadian can do to help.

Compton said: “Know the history, pass that knowledge on to your children and the people you are associated with, and call on the government to make change.”

“If you look at the Truth and Reconciliation Commission, there are 94 Calls to Action,” said Talaga. “Read them and see how you can change things—how you can apply one of those to your life.” 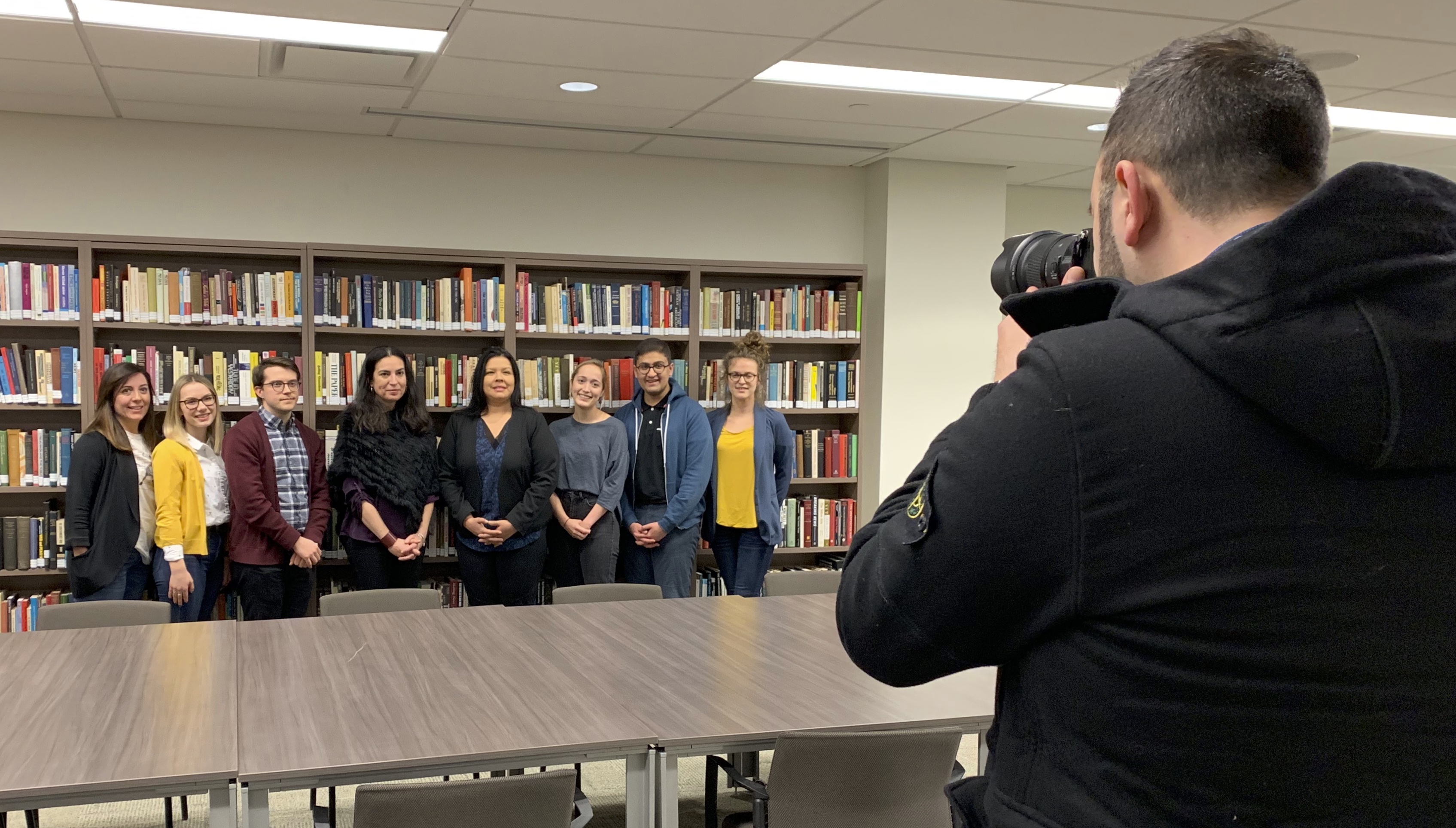 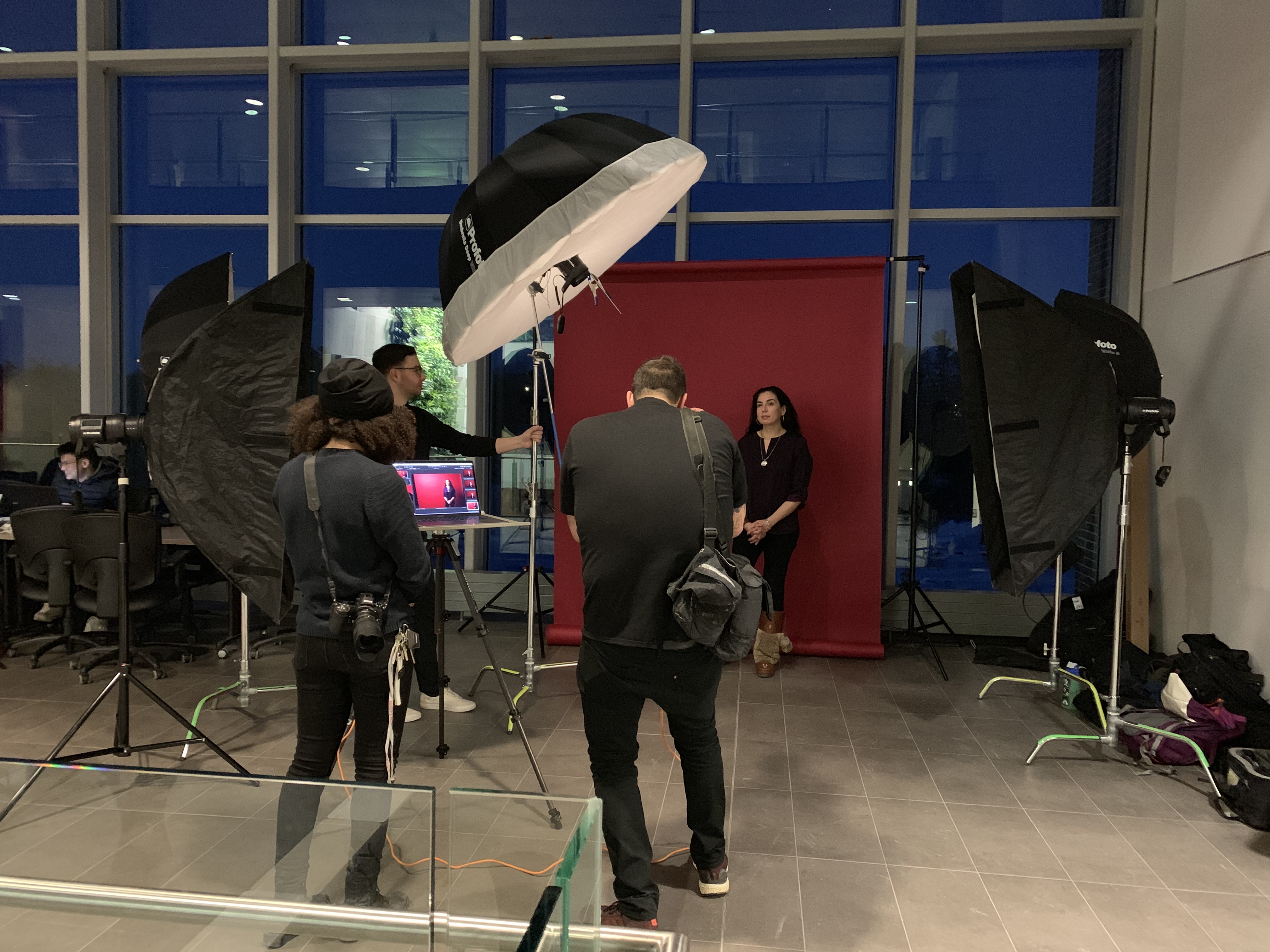 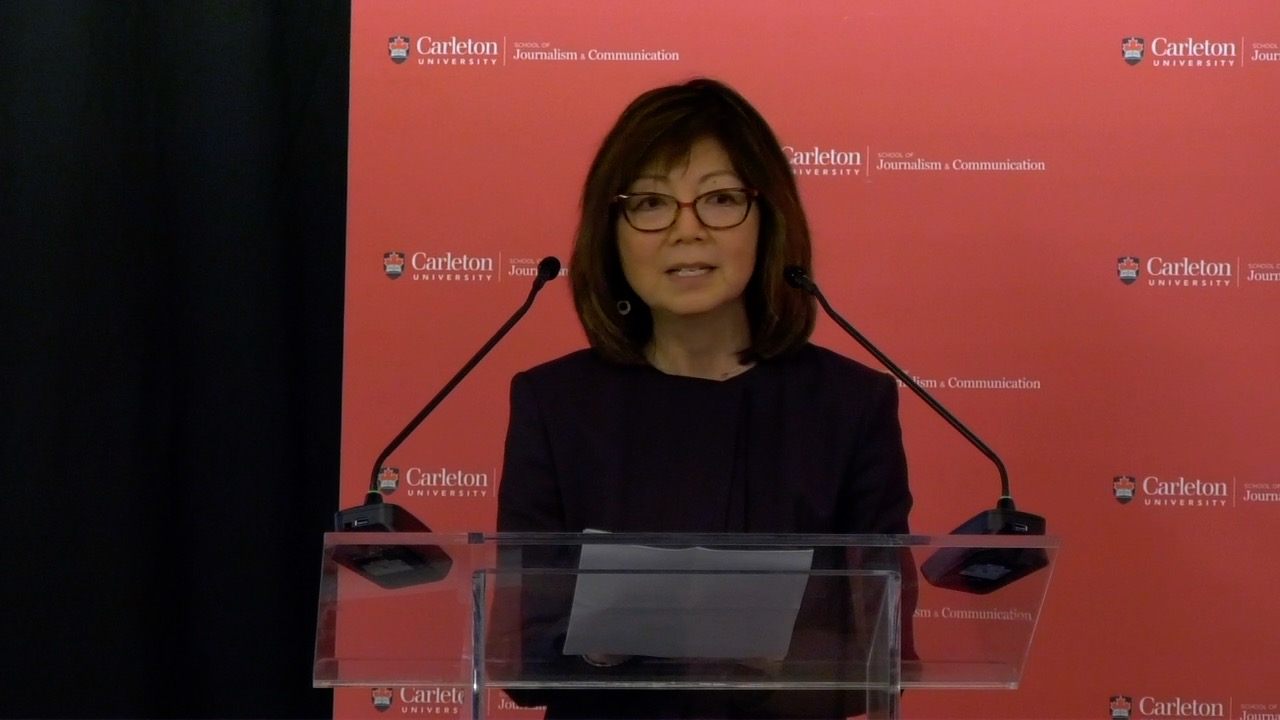 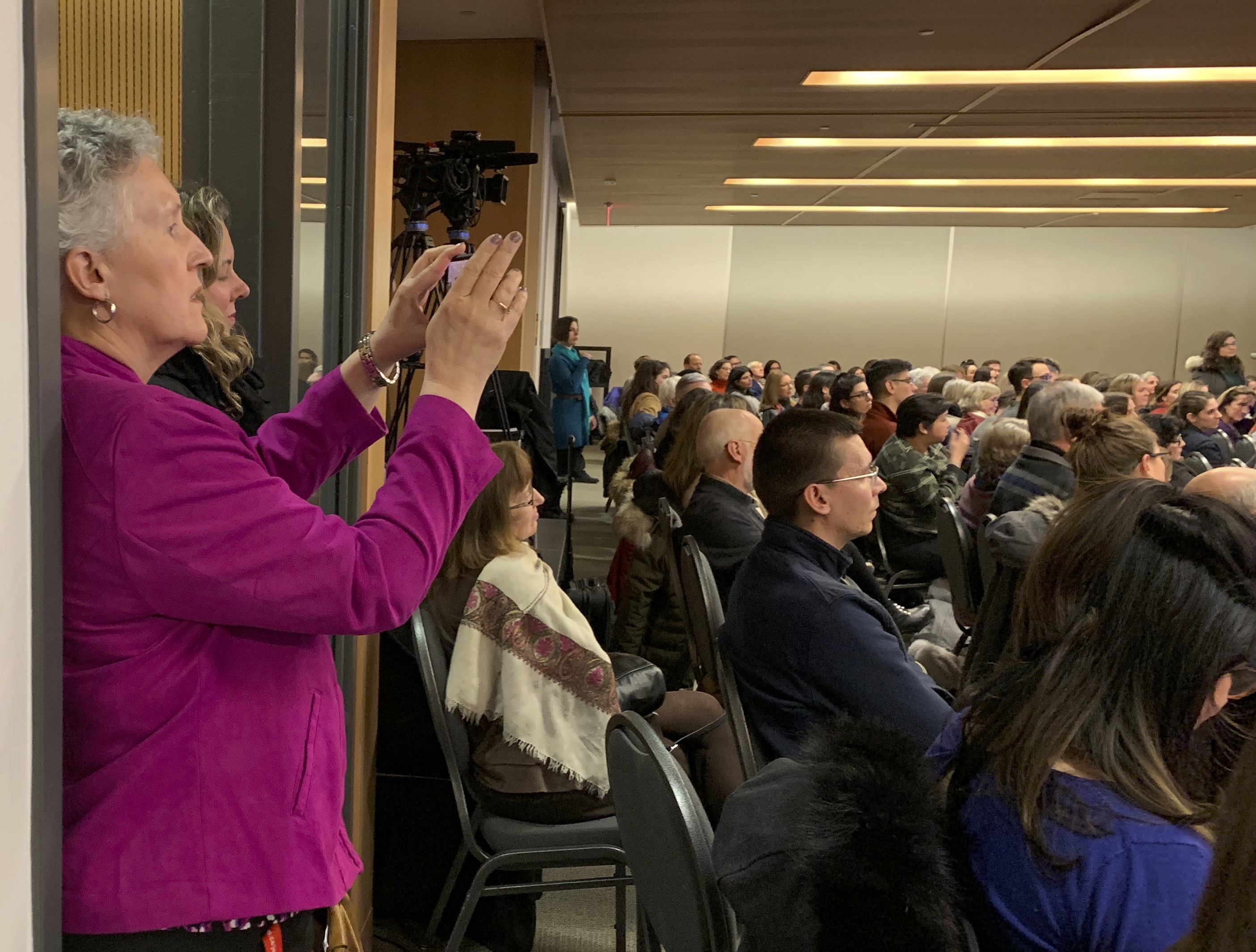 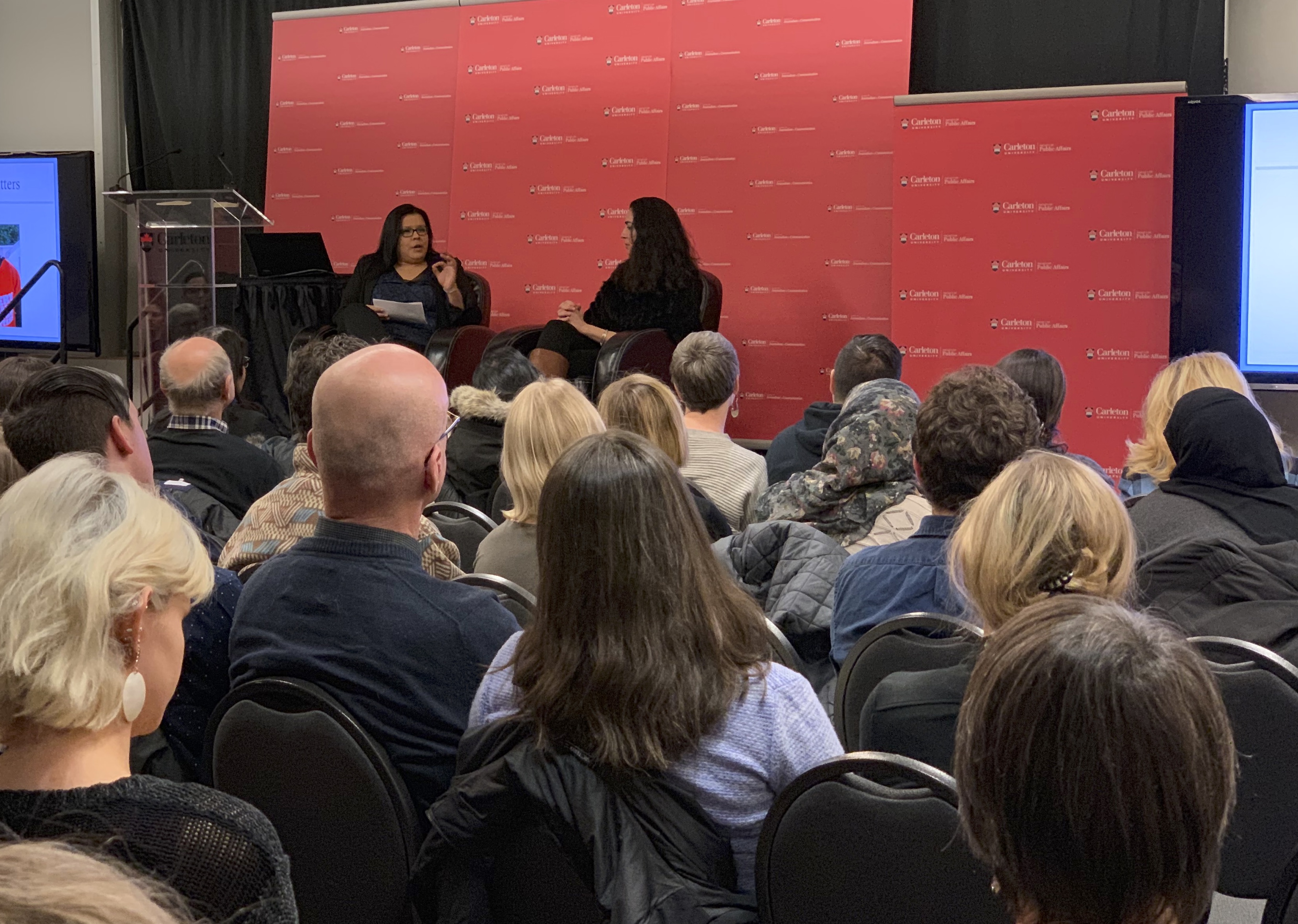 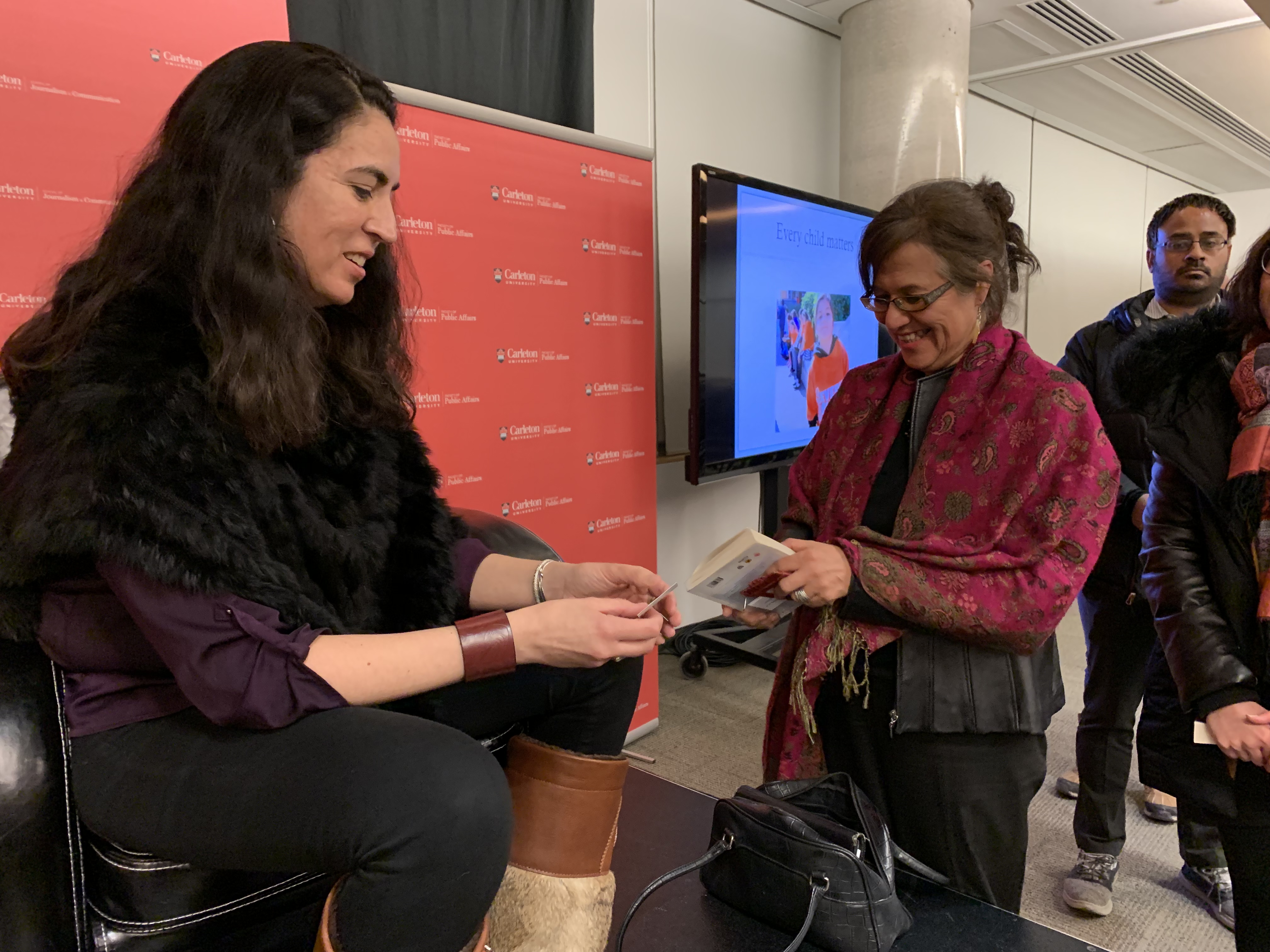 “We are very proud of her work. Her awards and nominations are many.”

“These stories are true. And how, once you are gifted with these stories, how do you turn away?”

Questions from the audience