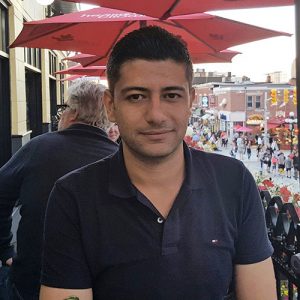 When the pro-democracy uprising started in Syria in 2011, Maan was a Master’s student at the University of Aleppo, studying commercial law. He found himself compelled to join the protests and call for change. His passion to participate in building a free, democratic state in Syria – where media is independent of government reach – drove him to journalism, where he found himself able to challenge the regime’s propaganda with few tools: laptop, internet access, and eagerness to provide a truthful account of the events shaping the country’s future.

He has been publishing under a pseudonym, Rami Sweid, while in Syria, to avoid the possibility of detention or questioning by the regime’s infamous secret intelligence services. This attempt to hide was not enough, nevertheless. He was arrested in 2012 and was told by military intelligence service officers that their brutal actions against him is simply a reaction to the topic he writes about: human rights and politics. This time period of his life has further solidified his belief in the power of media and information.

Following his release, he continued writing and publishing in various outlets on topics include political participation, sectarianism, extremism, and marginalization of women, among others.

In 2013, he started to work with the non-for-profit Syrian Network for Human Rights, documenting the ongoing violations of human rights in Aleppo governorate.

In the next year, he was chosen to be the manager of Algherbal Magazine, a monthly publication providing training and space for Syrian young journalists and reports. The magazine managed to publish 40 print issues and over 900 articles and reports online.

While he was increasingly becoming more known as a journalist, not only the Syrian regime was threatened by his work, but also extremist groups like the so-called Islamic State group, which pushed him to flee Syria and move to neighboring Turkey. From his location in Gaziantep, he became the political section editor of the leading Arabic, London-based news organization, Al-Araby al-Jadeed.

Since arriving to Ottawa in 2017, he received a diploma in Media and Communication Studies at Algonquin College. Currently, he is studying towards his Master’s of Journalism at Carleton University.