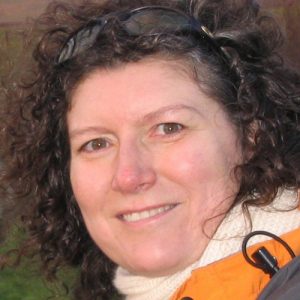 Christine Crowther works at the intersections of cultures, politics, and technologies. She teaches workshop courses in audio and video, as well as lecture-based courses that examine journalism norms and practices. Her courses are rooted in a combination of 15 years as a broadcast journalist, and about as many years as a journalism scholar and instructor.

Most of Christine’s broadcast experience is with the Canadian Broadcasting Corporation – in Canada and elsewhere. Her roles included senior television producer at CBC’s London, UK bureau; video-journalist then show-producer in Toronto for the national current affairs television programme CBC News: Sunday; reporter, producer, and writer in Toronto for CBC’s flagship television news program The National and CBC’s 24-hour television news network; freelance correspondent for CBC television and radio in Southeast Asia; and television and radio journalist for CBC Saskatchewan.

Christine’s academic work focuses on questions about professional journalism in governance. Her doctoral thesis analyzes discourses around professional journalism norms in the field of media and international ‘development’. She is also engaged with questions about the Canadian media system.  She is a co-editor and author for Journalism in Crisis: Bridging Theory and Practice for Democratic Media Strategies in Canada.

Christine has been teaching in the School of Journalism and Communication at Carleton since 2016. Before that, she taught undergraduate and graduate courses in the Department of Journalism at Concordia University in Montreal for several years. She has also been a trainer with non-governmental organizations working with journalists in Southeast Asia.