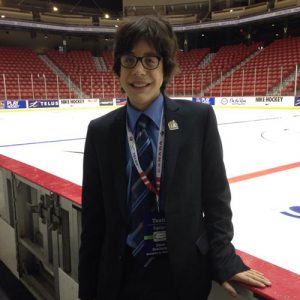 Simon Deschamps pursues his dream of becoming a sports journalist one step at the time. He just started his Master of Journalism at Carleton University.

Simon first discovered his passion for journalism while listening to the Montreal Canadiens’ games on the radio when he was 12 years old. At the same time, he developed a passion for other sports. Later on, he got interested in politics.

Growing up in a suburb of Montreal, he completed a bachelor in Political Science at the University of Quebec in Montreal (UQÀM).

In order to get experience in the field of sports journalism, he got involved during the last three years with the Chateauguay Grenadiers Midget AAA, as Communication Director. He had the chance to write game recaps and to be a play-by-play announcer on the web. Another valuable experience he got, was being a correspondent at Radio-Canada British-Columbia for the morning show, Phare Ouest, where he presented the cultural news of the Prince George area.

Simon hopes to follow the beat of a professional sports team or to work in political journalism.