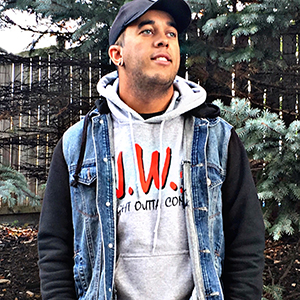 Devon was born and raised in Ottawa, opting to enroll in Carleton in 2012 for a Journalism degree, but ultimately opting for a BA in Music with Honours. With music being one of the top interests in his life, he wound up being invested in how music for people around the world was shaped differently by three important factors: gender/sexuality, race, and religion. These factors opened Devon’s mind beyond the point of just music by encouraging him to investigate how they affect various societies as a whole.

Some of Devon’s interests including occasionally writing for blogs, as well as doing creative writing. With a friend, he hosts a podcasts which they hope to grow beyond the Ottawa area in the future. Devon is also a huge sports (Go Sens/Colts Go!) and music fan, so he hopes to exchange knowledge on both with colleagues and classmates. Now ready to continue his education in journalism, Devon hopes to take his knowledge of gender/sexuality, race, religion, and music, and combine it with journalism in order to understand how they divide and unite us as a people in Canada.