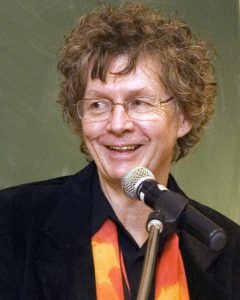 A long time ago, in my final year at the Ontario College of Art, I wrote and performed political satire on CTV’s public affairs show W5. Not long after, I cut PM Pierre, a catchy little ragtime number about Pierre Trudeau for Capitol Records, which won a big silver trophy. And not long after that, I recorded an equally catchy tune — to my mind at least — about leaving my body to medical research when I die, on an album for CBS Records. In hindsight, it is not surprising that I later developed a close affinity for the Native American Trickster as both muse and subject/object of research when I embarked on doctoral studies in Anthropology at UBC, exploring the role of humour and irony in contemporary Native art. When the research was completed, UBC Press published it as an elegant book. The favourable reception to The Trickster Shift, and the many friendships and insights I developed while conducting my research, eventually led to my present position as New Sun Chair in Aboriginal Art and Culture at Carleton University, where I have been for the last seventeen years. Here, in the School of Indigenous and Canadian Studies and the Department of Art History, I get to introduce students to concepts of Indigenous pedagogy in courses on Indigenous issues, cinema and visual arts; host the annual, and immensely popular, New Sun Conference on Aboriginal Arts (on temporary hiatus); and screen films by Canadian Indigenous film makers in China (twice) and Brazil. It has been a remarkable journey for a kid from art college with a guitar taking a break from the music business. And the journey continues…

And now…a more formal biography, drawing on some of the same experiences

I have been a faculty member at Carleton University since 2001 when I was appointed New Sun Chair in Aboriginal Art and Culture, the first position of its kind in Canada. I hold a joint appointment as Associate Professor in the School of Indigenous and Canadian Studies and the Department of Art History in the School for Studies in Art and Culture. I teach both undergraduate and graduate courses on Indigenous topics, with a special interest in contemporary Indigenous issues and identities and their aesthetic manifestation in literature, film, music and the visual arts. Since 2002 I have organized the annual New Sun Conference on Aboriginal Arts, which celebrated its 16th anniversary in 2017, and is currently on temporary hiatus. I am also interested in postcolonial theory, comparative indigenous minorities, cultural representation in museums, and the field of humour studies. Many of these interests were brought together in my book The Trickster Shift: Humour and Irony in Contemporary Native Art (UBC Press/U Washington Press), which won an American Book Award for its contribution to multicultural literature. This led to post-doctoral research on Native American cartoonists at Simon Fraser University. In 2005, I co-curated the exhibition About Face: Self-Portraits by Native American, First Nations and Inuit Artists at the Wheelwright Museum of the American Indian in Santa Fe, New Mexico. I currently use the catalogue to this exhibition for an interactive course on Indigenous self-portraiture where students get to create their own self-portraits. I have also lectured on Canadian Indigenous art and cinema in China (twice) and Brazil. In former lives I have worked as a graphic designer, television satirist, singer-songwriter, and recording artist. In academia, such an eclectic mix is called “interdisciplinarity.” In recent years I have been privileged to receive the inaugural Alumni of Influence Award for Distinguished Educator from the Ontario College of Art and Design University (2015); the Distinguished Alumni Award for Career Achievement from Brandon University (2016); and the Alumni Association Award for Professional Achievement from the University of Arizona (2017). In 2016, I was also inducted into the Ancaster High School Hall of Distinction. (Very cool!)