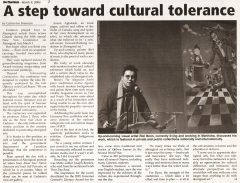 A step toward cultural tolerance

by Catherine Brennan, The Charlatan, March 9, 2006

Carleton played host to Aboriginal artists from across Canada during the Fifth Annual New Sun Conference on Aboriginal Arts March 1. But forget what you think you know – there were no soapstone carvings, beaded moccasins or totem poles. They were replaced instead by groundbreaking magazines, Juno-award winning songwriting and controversial paintings.

Themed Interweaving Communities, the conference was designed to explore the idea frequently professed by the late Ojibway artist, Carl Beam: “We are all related.” This was accomplished throughout the entire day, which featured music, literature and art laced with the spirit of humour and determination so prevalent in the Aboriginal community.

The conference was organized by professor Allan J. Ryan, who sits as the New Sun Chair at Carleton – the only university position in the country dedicated to promoting Aboriginal arts. It is thanks to this position, as well as funding from the Dean of Arts and the government Department of Canadian Heritage, that the conference is possible.

Ryan opened the day with a presentation of Aboriginal portrait art taken from About Face: Native American and Inuit Self-Portraits, of which he is co-curator. Susan Aglukark,, an Inuit singer, activist, and Office of the Order of Canada, sang and spoke of her own development as an artist, in which she referenced what she believed to be “a new, self-aware, forward-thinking revolution in Aboriginal art.” Up-and-coming painter Riel Benn, who displayed many pieces of work, is the proof of such a revolution. His body of work abounds with modern touches and cultural references which build on, and add a certain shock value to, the established idea of aboriginal arts. Benn’s The Magazine Series pairs traditional native figures with brash modern backgrounds and paints them onto such recognizable magazine covers as Time and People. The series came about as a result of his frustration with being able to see his own Aboriginal identity properly conveyed in the media.

Addressing the same issue was Harmony Rice, publisher and creative director of the national indigenous arts and culture magazine SPIRIT. One of the first of its kind, the quarterly publication seeks to redefine Canadian indigenous identity. “As a young native woman I just craved to see my culture and my community reflected in mainstream media, but it wasn’t available. So I did it myself.” Rounding out the presenters was Metis author Joseph Boyden, who read from his acclaimed work, Three Day Road. The inspiration for the novel, shortlisted for the 2005 Governor General’s Literary Award for Fiction, came from came from traditional oral stories of Ojibwa heroes in the First World War.

Close to 200 participants came from all around Ottawa, including many Carleton students. Natasha Sinniece, a second year English student, says she was impressed by the richness of the culture she experienced throughout the day. “So many times we think of Aboriginal art as being static, that it just stays the same – beadwork and moccasins,” she says. “But really, they have embraced technology and modern ideas in many ways better than the wider society.”

For Ryan, the strength of the conference – which takes a lot of effort and time to plan – is all in the conversation it fosters and the education it delivers. “I want you to appreciate Aboriginal arts, but what you take away from this conference is probably an appreciation for cultural difference, and tolerance, and alternate perspectives on the world that will stay with you a lot longer than anything to do with Aboriginal art.”