A series of lectures by Shigeyuki Kihara
presented by the New Sun Chair in Aboriginal Art and Culture
October 9, 2013
Carleton University 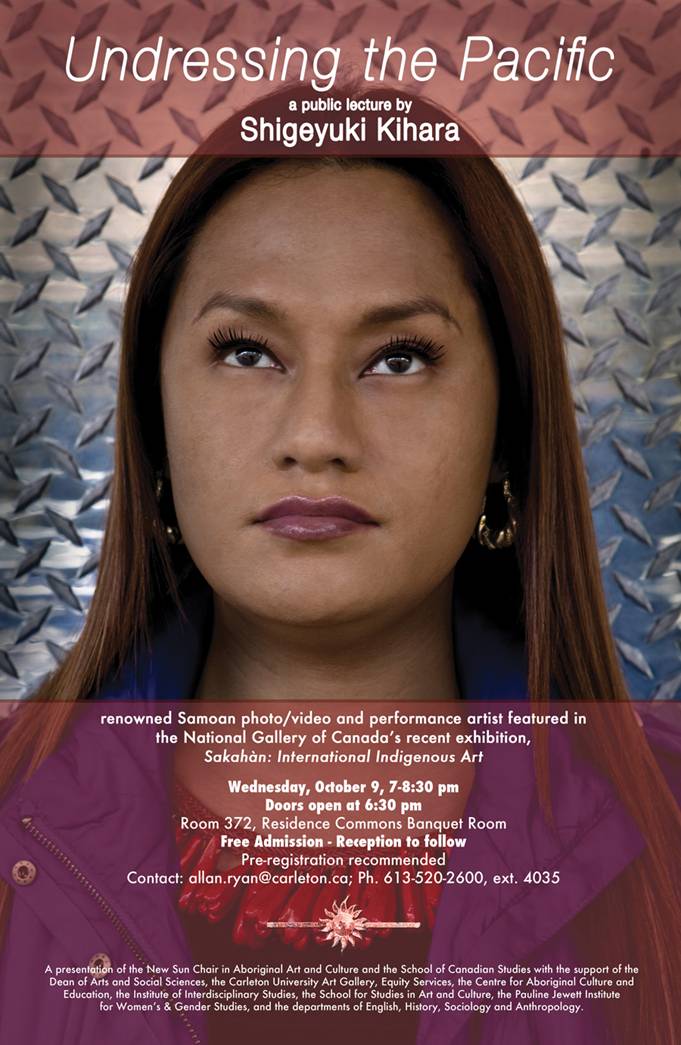 In the wake of her participation in the summer exhibition SakahBn: International Indigenous Art at the National Gallery of Canada, Samoan photographer, videographer, and performance artist Shigeyuki (“Yuki”) Kihara visited Carleton for a week in the fall of 2013. Over the period of five days she gave illustrated lectures to students enrolled in Canadian Studies, History, Literature, Women and Gender Studies, and Art History. She also gave a well-attended evening presentation to the general public titled Undressing the Pacific, critically reflecting on the colonial experience in the South Pacific.

A native of Samoa, born to a Japanese father and Samoan mother in 1975, Shigeyuki Kihara is a photo/video and performance artist, and curator whose triple self-portrait Fa’afafine (In the Manner of a Woman) was one of the highlights of the exhibition Sakahàn: International Indigenous Art at the National Gallery of Canada during the summer of 2013. This piece, however, only hinted at the breadth of artistry reflected in Kihara’s mid-career retrospective, Undressing the Pacific, which was developed and curated by the Hocken Library at the University of Otago in New Zealand, in conjunction with a research symposium devoted to her interdisciplinary artistry. Kihara’s international reputation gathered added lustre after her performance video Galu Afi: Waves of Fire won the prestigious Wallace Arts Trust Paramount Award in 2012. In 2013 alone, the Milford Galleries in New Zealand mounted a solo exhibition of her work, Where do we come from? What are we? Where are we going?; she received the Pasifika Research Art Fellowship from the College of Creative Arts at Massey University in New Zealand; participated in the exhibition Lips Painted Red at the Trondheim Kunstmuseum in Norway; was Artist in Residence at the Festival Belluard Bollwerk Internationalin in Fribourg, Switzerland, and until December 2013 was Artist in Residence in the International Studio and Curatorial Program in New York City. While in New York, she made a few select side trips, among them, to the Utah Museum of Fine Arts for a solo exhibition of her work entitled salt 8: Shigeyuki Kihara. In 2014, Where do we come from? What are we? Where are we going? travelled to the Pataka Museum in New Zealand.

Kihara’s works and performances have been shown internationally in the United States, Australia, China, Taiwan, Poland, Italy, Germany, France, Norway, Canada, and Switzerland. Since her incisive and sometimes witty postcolonial commentaries find multiple points of resonance in Canada, Carleton University enthusiastically accepted her offer to visit our campus in the fall of 2013. We are indebted to the Dean of Arts and Social Sciences for helping to make this visit a reality.

To learn more about the artist, visit www.shigeyukikihara.com. To watch a selection of her videos, visit http://vimeo.com/channels/shigeyuki. 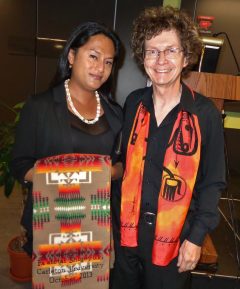 Prof. Allan J. Ryan and Shigeyuki Kihara carrying the blanket presented to her as a memento of her visit to Carleton. A close-up of the blanket

A special presentation the New Sun Chair in Aboriginal Art and Culture and the School of Canadian Studies, with the support of the Carleton University Art Gallery, Equity Services, the Centre for Aboriginal Culture and Education, the Institute of Interdisciplinary Studies, the School for Studies in Art and Culture, the Pauline Jewett Institute for Women’s & Gender Studies, and the departments of English, History, Sociology, and Anthropology