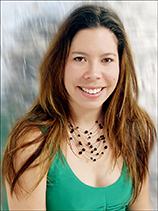 Tracey Deer is a filmmaker from Kahnawake, and obtained her degree in Film Studies from Dartmouth College, graduating with two awards of excellence. She began her professional career with CanWest Broadcasting in Montreal and later joined Rezolution Pictures of Montreal. She was co-director of One More River, a film that documented the emotional and political turmoil within the Cree Nation when they signed a new deal to allow more hydroelectric damming on their land. The film won the Best Documentary Award at the Rendez-vous du cinéma québécois in 2005 and was nominated for the Donald Brittain Best Social/Political Documentary at the Geminis. The film was broadcast on APTN in March 2005. Her second film was Mohawk Girls, which she wrote, directed, and filmed, about the lives of three Mohawk teenagers growing up on the Kahnawake reserve. It was co-produced with Rezolution Pictures and the National Film Board and won the Alanis Obomsawin Best Documentary Award at the ImagineNATIVE Film + Media Arts Festival in 2005. Her latest projects are a feature documentary called Club Native, examining the concept of modern Native identity, and a feature documentary about a Mohawk immersion elementary school, with Mushkeg Media, as well as two short fiction films currently in development with her production company, Mohawk Princess Pictures. 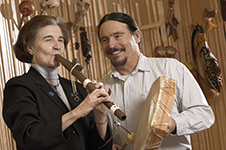 Clealls (John Medicine Horse Kelly) is from Skidegate, on Haida Gwaii, otherwise known as the Queen Charlotte Islands. Dr. Kelly is an Assistant Professor in Carleton’s School of Journalism and Communications and serves with Elaine Keillor as co-director of CIRCLE, the Centre for Indigenous Research, Culture, Language, and Education. Clealls was one of fifteen researchers designated by Canadian Heritage as authorities on language and cultural revitalization to advise the government on strategies to perpetuate aboriginal languages in Canada. Dr. Kelly has developed unique electronic recording and editing systems for creating language resources, and has trained aboriginal community members in the use of these systems to record their own elders. Clealls was co-investigator, editor, and writer for the Native Drums and Native Dance websites developed and facilitated by Elaine Keillor.

Elaine Keillor is an internationally known concert pianist and a Distinguished Research Professor Emerita at Carleton. With all of the theoretical requirements completed at the age of ten, she remains the youngest ever recipient of the Associate diploma in piano from the Royal Conservatory of Music in Toronto. She has made numerous highly acclaimed recordings as well as being a prolific writer, and has received a variety of prestigious awards. Hired by Carleton as a specialist in Canadian music, she developed and taught the first university course in Canada to explore First Peoples’ musical expression. Throughout her career Dr. Keillor has amassed a vast collection of this musical expression, which forms the bulk of the material now available through two websites. Dr. Keillor headed the teams that produced Native Drums (2005), a comprehensive, educational, and information website on musical expressions of the First Peoples within Canada, and its sequel on Native Dance (2007). These are joint projects of Canadian Heritage’s Canadian Content Online Program and Carleton University. 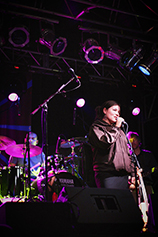 Taqralik Partridge is a spoken word performer, throat singer, and writer from Kujjuaq, Nunavik (Nothern Quebec). Now living in Montreal, she has developed a unique style, which is grounded in traditional Inuit storytelling, blended with gritty urban speak, to tell contemporary stories, which evoke the challenges of being Inuit in modern Canadian society. The Nunatsiaq News has written, “When she performs, you can never tell what you’ll hear next: an amusing satire perhaps, a delicate lyric, or a raucous barrage of high-speed lines, delivered straight from the gut.” Taqralik recorded her Eskimo Chick piece for the compilation CD distributed with Spirit Magazine’s 2006 spring music issue and is working on a debut CD. She is communications director of the Avataq Cultural Institute, a non-profit organization dedicated to protecting and promoting the language and culture of Inuit in Nunavik. 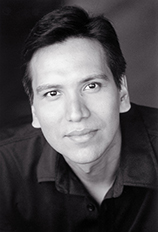 Michael Greyeyes is a dancer, actor, choreographer, and Assistant Professor in the Department of Theatre at York University where he teaches movement for actors. He began his professional career as a classical ballet dancer with the National Ballet of Canada and the company of Eliot Feld in New York. As an actor he has worked on stage and extensively in film and television for the last fourteen years. He was invited to create new dance works for the Dusk Dances festival in Toronto and for Nozhem: First Peoples Performance Space and Trent University’s Indigenous Studies Program. The theatre work developed for Trent was a duet, co-choreographed by Santee Smith, which toured across Canada in 2008 and was an invited dance work for the 2008 Canada Dance Festival held bi-annually in Ottawa. Professor Greyeyes wrote, choreographed, and appears in the film Triptych, directed by Byron McKim with an original score by Miquelon Rodriguez. The film is part of an original series developed for Bravo! and subsequently broadcast on APTN. 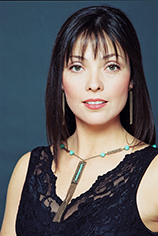 Santee Smith is a dancer, choreographer, and artistic director from Six Nations, Ontario. She attended the National Ballet School and holds a Master’s in Dance from York University. Santee was an integral part of the Aboriginal Dance Project Chinook Winds at the Banff Centre for the Arts. In 1996 she began creating and performing her choreography including the works Kaha:wi, Here On Earth, Midwinter Dreaming, A Constellation of Bones, The Threshing Floor, Woman in White, and A Story Before Time. She presents her work nationally and internationally and is the recipient of several awards for excellence in dance. She is the founder of Living Ritual: World Indigenous Dance Festival. Santee is in the process of creation and production for Transmigration, with Odawa composer Barbara Croall, and L’Histoire de soldat, in partnership with Theatre Aquarius and the Hamilton Philharmonic Orchestra. She is touring nationally with The Threshing Floor for the CanDance Network’s Indigenous Dancelands, and Fragmented Heart, which was performed for the Canada Dance Festival at the National Arts Centre in Ottawa.