Born in 1935 of Dene Suline and Saulteaux descent, Alex Janvier was raised in the nurturing care of his family until the age of eight. The young Janvier was then uprooted from his home and sent to the Blue Quills Indian Residential School near St. Paul, Alberta. Although he speaks of having a creative instinct from as far back as he can remember, it was at the residential school that he was provided with the tools to create his first paintings. Unlike many Aboriginal artists of his time, Janvier received formal art training at the Alberta College of Art in Calgary and graduated with honours in 1960. Immediately after graduation, Janvier was appointed to a position as an art instructor at the University of Alberta.

While Janvier recognizes the artists Wassily Kandinsky and Paul Klee as influences, his style is unique. Many of his masterpieces involve an eloquent blend of both abstract and representational images with bright, often symbolic colours. As a First Nations person emerging from a history of oppression and many struggles for cultural empowerment, Janvier paints both the challenges and celebrations that he has encountered in his lifetime. He proudly credits the beadwork and birch bark basketry of his mother and other relatives as influencing his art.

As a member of the “Indian Group of Seven,” Janvier is one of the significant pioneering Indigenous artists in Canada, and as such has influenced many generations of artists. He was selected to represent Canada in a Canadian/Chinese Cultural Exchange in 1985. Although he has completed several large murals nationally, Janvier speaks of the 418 square meter masterpiece entitled “Morning Star” in the dome of the Canadian Museum of Civilization (now the Canadian Museum of History), as a major highlight in his career. In January 2004, one of his works was displayed at the Canadian Forum on Cultural Enterprise in Paris, France. In 2012 the new Janvier Gallery opened at Cold Lake First Nation, located north of the City of Cold Lake. In recognition of his achievements, he recently received three prestigious Lifetime Achievement Awards from the National Aboriginal Achievement Foundation, The Tribal Chiefs Institute, and Cold Lake First Nation. He is the recipient of numerous awards including three honorary doctorates, and is a Member of the Order of Canada.

A major retrospective of his work is currently on exhibit at the National Gallery of Canada until April 17, 2017.

In Conversation with Jonathan Dewar

Jonathan Dewar is of mixed heritage, descended from Huron-Wendat, Scottish, and French-Canadian grandparents. He is a PhD candidate in Indigenous and Canadian Studies at Carleton University. From 2012 to 2016 he served as Director of the Shingwauk Residential Schools Centre and Special Advisor to the President at Algoma University, where he led research, education, and community service programming, including museum and gallery initiatives, and taught courses in Anishinaabe Studies and Fine Arts. From 2007 to 2012 Jonathan served as Director of Research at the Aboriginal Healing Foundation. In each of these roles he has had the privilege of engaging with Indigenous artists, curators, and Elders in conversations about the role of art and artists in reconciliation. Candy Palmater is a broadcaster, comedian, feminist, writer, film producer, activist, actor, and recovered lawyer. She can currently be seen as host of APTN’s The Candy Show, and she has hosted CBC Radio’s weekday afternoon interview program The Candy Palmater Show. She’s a regular contributor to CBC Radio’s The Next Chapter, and has guest-hosted Definitely Not the Opera and Q. Candy has written and hosted many broadcasts including Ab Day Live, the Indspire Awards, and the imagineNATIVE Film Festival Awards Show.

She was the first Aboriginal law student in Canada to be valedictorian of her graduating class at Dalhousie University Law School and went on to practice Labour and Aboriginal law at a large corporate firm until being drawn into show business. Before pursuing an entertainment career full time, Candy directed First Nations education for the Nova Scotia Department of Education for a decade. She is currently working on a Masters of Education degree at St. Francis Xavier University and has taught in the Transition Year program at Dalhousie. She served as executive producer on the film Building Legends: The Mi’Kmaq Canoe Project, and two other films on Mi’Kmaw culture.

Candy has a recurring role on Trailer Park Boys (NETFLIX), has appeared in Call Me Fitz (HBO Canada) and Sex and Violence (OutTV). She was nominated for a Screen Nova Scotia Best Supporting Actress Award for her role in Forgive Me (Superchannel).

Candy is a regular performer on the comedy club circuit and a frequent host of entertainment galas and events. With an irreverent and comedic approach to social issues, she is a speaker in great demand. Candy travels the globe speaking to audiences, large and small, about the power of love, kindness, and self-acceptance. Candy believes we are more alike than different and that you can never have too much Candy. Shane Belcourt is an award-winning and CSA-nominated Métis filmmaker with a deep respect for the traditions and knowledge of Aboriginal people. The majority of his work explores and celebrates Aboriginal issues and culture. He grew up in Ottawa, the son of a prominent Aboriginal rights leader (Tony Belcourt) in a home of artistic siblings (Christi and Suzanne Belcourt). His debut feature film, Tkaronto, was chosen as the Closing Night film at the 2007 imagineNATIVE Film and Media Festival. Belcourt has been a TIFF Talent Lab participant, an IFC Mentorship Award Winner, and in 2010, Filmmaker in Residence at the Winnipeg Film Group. His short films include dramas, A Common Experience and Apikiwiyak, and documentaries for broadcast projects such as Kaha:wi – The Cycle of Life and the 13-part TV series Urban Native Girl. He has produced commercials such as the 2014 imagineNATIVE Native to campaign, and was chosen to direct two Historica Canada Heritage Minutes on the topics of Treaty and Residential Schools. His films and documentaries have played at imagineNATIVE, Telefilm Canada’s Perspectives Program at Cannes, Whistler Film Festival, the 2010 Vancouver Olympics, the Museum of the American Indian in Washington, D.C., the TIFF Bell Lightbox Indigenous Cinema Retrospective, and on Air Canada, CBC, APTN, and The Comedy Network.

Belcourt teaches filmmaking workshops throughout the year with Aboriginal youth and youth at risk through various Aboriginal outreach programs, as well as teaching a directing class at LIFT twice a year in Toronto.

Currently, he is working on the adaptation of a Jeff Lemire graphic novel, Roughneck, along with preparing to shoot his second feature film, Sunken Treasure.

Among his many musical talents, he produced the Juno-nominated Digging Roots CD, Seeds. Mathew Nuqingaq is an artist, jewellery maker, drum dancer, photographer, educator, and the founder of the aptly named Aayuraa Studio in Iqaluit. Aayuraa means “snow goggles” in Inuktitut.  The purpose of snow goggles is to protect one’s vision, which was exactly his intent for this unique, inspiring, and collaborative studio space. In the early 1990s, the Nunavut Arctic College began offering a jewellery and metalwork program. Nuqingaq fell in love with the beautiful pieces being created and decided to enroll. “Our ancestors used to make small pieces, because they had little material and couldn’t travel with heavy pieces. I like working in metal—you can take it with you—you don’t have to have so much space.”

Nuqingaq’s work has attracted an international following. People around the world clamour to wear his jewellery. It is detailed, but simple; audacious, but refined; it has weight but it is miniature; it is natural, but supernatural. His creativity and craftsmanship are exquisite, and most often, amusing. There is a sense of play in almost everything he creates. “When we do snow sculpture, we put on our snowsuits and go play—we play with snow. When we do jewellery, we get our small tools and we play. We make something that is not real, and we make something out of nothing; and we can also make a living, which is satisfying.”

Nuqingaq is also an accomplished drum dancer and regularly receives invitations to perform at international festivals and celebrations. As a leader in the Arctic arts community he is co-founder and past chair of the Nunavut Arts and Crafts Association, and serves on the Board of Directors of the Inuit Art Foundation. He is one of the six artists who created the splendid mace for the Nunavut legislature.

In December 2016, it was announced that Mathew Nuqingaq will be invested as a Member of the Order of Canada for his contributions as a jewellery designer and drum dancer. 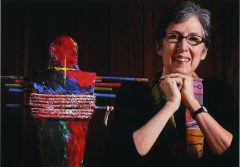 Ruth Phillips is Professor of Art History at Carleton and holds the Canada Research Chair in Modern Culture. She became interested in African art as an undergraduate when she had the opportunity to spend two summers in Nigeria and wrote her doctoral dissertation on Mende women’s masquerades from Sierra Leone. She shifted her research to First Nations arts when she began teaching at Carleton in the late 1970s and has since focused on the arts of the Great Lakes region. For several years she served as director of the UBC Museum of Anthropology where she initiated a renewal of the museum’s physical and virtual infrastructure. Her appointment to a Canada Research Chair brought her back to Carleton in 2002 and gave her the opportunity to apply the general concept she and her staff had developed at UBC to research in Great Lakes historical heritage. The result was the formation of the Great Lakes Research Alliance for the Study of Aboriginal Arts and Cultures (GRASAC) and the development of the GRASAC Knowledge Sharing database.

Phillips’ publications include Museum Pieces: Toward the Indigenization of Canadian Museums (2011), Trading Identities: The Souvenir in Native North American Art from the Northeast (1998), and, with Janet Berlo, Native North American Art (2nd edition, 2015). Mapping Modernisms: Art, Colonialism, Indigeneity, co-edited with Elizabeth Harney, is to be published by Duke University Press as the first publication in its Multiple Modernisms project. She has served as president of CIHA, the International Committee on the History of Art, and is a fellow of the Royal Society of Canada.

Wahsontiio Cross is an artist and independent curator from Kahnawà:ke Kanien’kehá:ka Territory. She is currently a PhD Candidate in the Cultural Mediations program at Carleton and her research focuses on Haudenosaunee material culture. With GRASAC, Wahsontiio is exploring how the database can be used as a resource for Indigenous artists, and how content can be created for the database to better reflect the needs of artists and community members.

Alexandra Kahsenni:io Nahwegahbow is Anishinaabe and Kanien’keha:ka, and a member of Whitefish River First Nation with roots in Kahnawake. She is a PhD student in the Cultural Mediations program at Carleton’s Institute for Comparative Studies in Literature, Art and Culture, where her research focuses on Indigenous visual and material culture and stories and oral history from the Great Lakes region.

A presentation of the New Sun Chair in Aboriginal Art and Culture
with the support of the Dean of Arts and Social Sciences, the National Gallery of Canada,
and the generosity of private donors