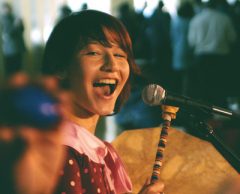 Tamara Podemski, who starred in the musical Rent on Broadway, performs at Carleton University. She says, “It’s a celebration every time I get cast in something that has nothing to do with my race.” Photo: Kazuyoshi Ehara

Writers of erotica and actors who don’t play aboriginal roles are among the new wave in First Nations media, Lyla Miller reports.

Aboriginal artists gathered at an Ottawa conference this weekend are leaving tradition behind as they create erotic fiction, digitally altered photographs and provocative television programs—inviting challenges from within and outside their communities. Kateri Akiwenzie-Damm, an Anishnaabe writer, editor and publisher, spoke about why she decided to publish Without Reservation, a collection of aboriginal erotica. “I thought, I’m inundated with all these images of aboriginal people whose sexuality comes from a place where we’re seen as victims, and that keeps getting perpetuated over again,” she said. “We’re trying to heal … and I think one way to do that is to present other images and to allow people to embrace that side of themselves.”

However, Carleton University student Jaime Koebel, also a writer of aboriginal descent, cautioned that she could see why some First Nations people might not yet be ready to embrace aboriginal erotica.

“A lot of us are still going through issues of sexual abuse, or abuse in general, and residential schools,” she said. “I think that maybe you’re ahead of the game at this point.”

Darrel Dennis, who hosts Bingo and a Movie on the Aboriginal People’s Television Network, said he’s part of a national movement of young aboriginal artists who are “trying to show stories, no matter how gritty they are, with reality.”Mr. Dennis has received angry letters over Moccasin Flats, a series he’s writing about the lives of teens in a Regina slum. Some of the characters are pimps, prostitutes and drug users, and there are those who fear the show will reinforce negative stereotypes.

Despite such criticisms, Mr. Dennis said the edgy program is breaking important ground.

“I think a lot of young aboriginal people are more interested in cutting to the truth and starting to really question some of the things we’ve upheld as the truth, and starting to question what is our responsibility in our future,” he said.

Tamara Podemski, a singer and actress who starred in the musical Rent on Broadway, said the largest problem facing aboriginal actors is that they are usually cut off from roles that aren’t specifically designed for them.

“It’s a celebration every time I get cast in something that has nothing to do with my race. It’s a cause for me and every other native performer to celebrate, because it doesn’t mean that I play a white character, it means that I play a human being,” she said.The conference was organized by Prof. Allan J. Ryan, who holds the New Sun chair at Carleton University—the only endowed university position in Canada dedicated to promoting aboriginal arts.

Mr. Ryan said there’s a lot of buzz around the five artists he invited to participate in the conference, now in its third year.

“The artists are saying, ‘Where are the depictions of our experiences that we don’t see? I have to create these images,'” said Mr. Ryan. “These are the people who are making a difference and pushing the boundaries.”