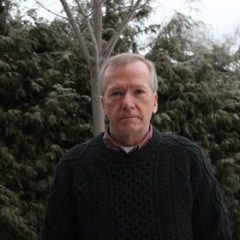 Photo from the Writers’ Trust of Canada

Greg Donaghy, Adjunct Research Professor in the Department of History and a prolific historian of Canada’s foreign relations, passed away on the first of July. Greg served as the Director of the Bill Graham Centre for Contemporary International History at the University of Toronto, after retiring as the Head of the Historical Section at Global Affairs Canada in the spring of 2019. Greg was a good friend and colleague to many members of our department, dating from his time here as a graduate student. He wrote his MA Research Essay at Carleton University in 1989 on “The rise and fall of international socialism in the Cooperative Commonwealth Federation 1933-1949,” under the supervision of Norman Hillmer. The doctoral thesis he completed under the guidance of John English at the University of Waterloo, was later published by McGill-Queen’s in 2002 under the title: Tolerant Allies: Canada and the United States, 1963-68.

As Historian, and later Head, of the Historical Section of Global Affairs Canada, Greg shepherded the production of seven volumes of the important series of Documents on Canadian External Relations, each covering one year of the 1950s. On the way, he became one of the country’s foremost experts in locating and assessing diplomatic and political archives. In 2017, he co-authored the latest volume of the history of Canada’s Department of External Affairs, with fellow historians John Hilliker and Mary Halloran, a work entitled Innovation and Adaptation, 1968-1984. Greg also wrote Grit: The Life and Politics of Paul Martin, Sr., which was a finalist for the 2016 Shaughnessy Cohen Prize for Political Writing.

A long-time resident of this city, Greg was a driving force behind the Ottawa Historical Association and was busy planning next year’s season of public lectures in collaboration with fellow historians from the community. Greg will be deeply missed by his dear OHA colleagues, including National Defence Historians John MacFarlane and Isabel Campbell, also an Adjunct Research Professor in our department, Jo McCutcheon, Executive Director of the Association of Canadian Archivists, Jennifer Anderson, newly appointed historian at Global Affairs and Carleton graduate, Betsey Baldwin, Public History, and his close friend Chris Cook.

We will most remember Greg as the employer, publisher, and mentor of generations of graduates and the committed architect of regular colloquia and edited collections on Canada’s transnational relations. Encouraged by him, junior colleagues learned to bring scholars and practitioners together, solicit papers, edit contributions, and introduce debates. Among them are David Webster, Adjunct Professor in the department, and Jill Campbell-Miller, Post-Doctoral Fellow. Greg was also a frequent guest lecturer in our classrooms. His generous, steady, and understated collaboration has left an indelible mark on the community of historians and on our department.

The Ottawa Citizen published an obituary on July 4.