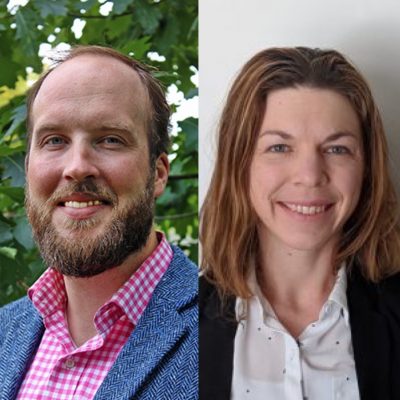 School of Journalism and Communication faculty members Brett Popplewell and Katie Graham have been honoured with 2021 Carleton University Teaching Awards, joining eight other Carleton professors who were recognized as “outstanding educators” in an announcement issued July 26 from the office of David Hornsby, Carleton’s associate vice-president for teaching and learning.

Popplewell, an SJC journalism professor, was one of three recipients of the New Faculty Excellence in Teaching Award for his innovative approach to creating and delivering courses. He was also recognized for his partnership with students and faculty on the journalism program’s anti-racism and equity efforts.

Graham, who teaches in the SJC’s Media Production and Design program, was among five recipients of this year’s Excellence in Blended and Online Teaching Award, given “in recognition of the outstanding efforts that have gone in to designing online courses.” The announcement noted that “this year was an exceptional one for online teaching and learning” because of the COVID-19 pandemic, and that Graham and the other winners were being honoured “for their continued innovation and exceptional impact on student learning throughout the transition to a predominantly online learning environment.”

Other winners of the teaching prizes were: Kahente Horn Miller (School of Indigenous and Canadian Studies), who received the Provost’s Fellowship in Teaching Award “for her ongoing commitment to fostering relationships and engagement between Indigenous and non-Indigenous peoples that go beyond the written word, classroom and research settings”; Jason Jaskolka (Department of Systems and Computer Engineering) and Deanna Whelan (Department of Psychology), who shared the New Faculty Excellence in Teaching Award with Popplewell; Ian Pulsifer (Department of Biology), who earned the Excellence in Learning Support Award; and Céline Bonnotte-Hoover (Department of French), Peter Coffman (School for Studies in Art and Culture), Gregory MacIsaac (College of the Humanities) and Marylynn Steckley (Arthur Kroeger College of Public Affairs), who were also awarded the Excellence in Blended and Online Teaching Award.

Popplewell, who joined the SJC’s journalism faculty in 2017, is an award-winning magazine writer and the founding director of the school’s Future of Journalism Initiative. He has also served as chair of the school’s Permanent Working Group for Equity and Inclusion and faculty liaison with the student-led Association for Equity and Inclusion in Journalism.

Graham, who holds bachelor and master’s degrees from Carleton’s Azrieli School of Architecture and Urbanism, joined the SJC faculty in 2019. Graham continues to be involved with Carleton Immersive Media Studio (CIMS), a research lab affiliated with the School of Architecture that’s focused on how advanced digital technologies and hybrid forms of representation can reveal the invisible aspects of architecture. Most recent accomplishments with CIMS include the involvement in the 2020 Prix Gémeaux winning virtual reality project, Parliament: A Virtual Experience. Graham led the team that developed the virtual environment for the Library of Parliament and National Film Board collaborative project.

She possesses “a passion for learning, research and new technology that she brings to the classroom setting.” 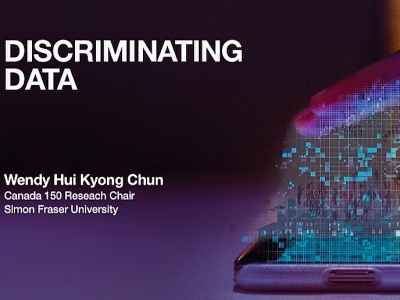