In May and June, Jennifer Evans curated a series of daily responses on the New Fascism Syllabus 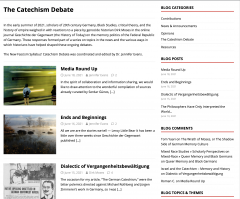 (NFS) to a thought piece written by genocide historian Dirk Moses in the Swiss history journal Geschichte der Gegenwart (the History of Today). In “The German Catechism,” Moses, Frank Porter Graham Distinguished Professor of Global Human Rights History at UNC-Chapel Hill, argued provocatively: “For many, the memory of the Holocaust as a break with civilization is the moral foundation of the Federal Republic. To compare it with other genocides is therefore considered a heresy, an apostasy from the right faith. It is time to abandon this catechism.” Eighteen scholars and writers from around the globe, experts in the history of 20th century Germany, antisemitism and the Holocaust, Black Studies, memory studies, critical theory, colonialism and empire weighed in from their various vantages. Labelled “the Catechism Debate,” this conversation garnered over 36,000 page views in the space of two weeks and has since acquired media interest in Germany, with follow up pieces in some of the nation’s most prestigious newspapers.