Climate Diplomacy and its Histories: Inside the IPCC (Shannon Lecture #4) 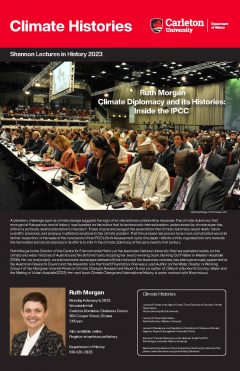 February 6: Climate Diplomacy and its Histories: Inside the IPCC

A planetary challenge such as climate change suggests the logic of an international collaborative response. The climate diplomacy that emerged at Fukuyama’s ‘end of history’ was founded on the notion that its technocratic internationalism, underpinned by climate expertise, offered a politically neutral alternative to liberalism. These origins encouraged the expectation that climate diplomacy would neatly follow scientific advances, and produce multilateral solutions to the climate problem. That this process has proven to be more complicated warrants further inspection. In the wake of the conclusion of the IPCC’s Sixth Assessment cycle, this paper reflects on this organisation’s turn towards the humanities and social sciences in its efforts to inform the climate diplomacy of the early twenty-first century.

Ruth Morgan is the Director of the Centre for Environmental History at the Australian National University. She has published widely on the climate and water histories of Australia and the British Empire, including her award-winning book, Running Out? Water in Western Australia (2015). Her current project, on environmental exchanges between British India and the Australian colonies, has been generously supported by the Australian Research Council and the Alexander von Humboldt Foundation. She was a Lead Author on the Water chapter in Working Group II of the Intergovernmental Panel on Climate Change’s Assessment Report 6, and co-author of Cities in a Sunburnt Country: Water and the Making of Urban Australia (Cambridge University Press, 2022). Her next book Climate Change and International History is under contract with Bloomsbury.

Co-presented with the support of the Department of Geography and Environmental Studies.