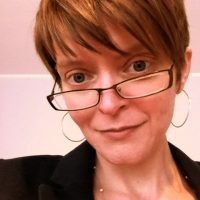 Beth A. Robertson is a gender and sexuality historian of science, medicine and technologies of the marginal or the marginalized. She is currently Project Director and Postdoctoral Fellow of the International Development Research Centre (IDRC) $1.1 million funded project “Gendered Design in STEAM (science, technology, engineering, art and math) for Low-and-Middle-Income Countries (LMICs).

Robertson’s teaching and research interests encompass the history of the body and the senses, queer theory, visual and material culture, public history, transnationalism and disabilities. She is book review editor of Scientia Canadensis and winner of the 2017 History Fellowship of the Association of Computer Machinery. This fellowship funded the early research of her new project, tentatively entitled Blind Machina: Disability, Technology and the Body in Postwar Society, 1945-1989. By joining the theories of feminist science and technology studies with critical disabilities studies, this project aims to investigate intersecting networks of postwar Canada to explore a range of technologies either made by, used or applied upon the bodies of people who were blind. Situating these technologies as a form of knowledge, this research probes how these devices both informed and were informed by broader understandings of disability in the postwar world.

This new project extends from Robertson’s previous work and publications, including most recently her contributions to the edited collections, Made Modern: Science and Technology in Canada, eds. Edward Jones-Imhotep, Tina Adcock (Vancouver: UBC Press, December 2018), and A Companion to Canadian Women’s and Gender History, eds. Nancy Janovicek, Carmen Nielson. Toronto: University of Toronto Press, 2019. Her previous book, Science of the Séance: Transnational Networks and Gendered Bodies in the Study of Psychic Phenomena, 1918-1940 was released by UBC Press in the fall of 2016 and nominated for the 2017-18 Women’s and Gender Studies et Recherches Féminist (WGSRF) Outstanding Scholarship Prize.