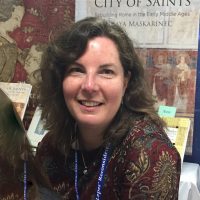 Lori is currently a postdoctoral fellow in the Department of History at Carleton (funded by the Social Sciences and Humanities Research Council of Canada and previously by Associated Medical Services). She is a medical historian whose main area of expertise is medieval and early modern writing about the plague. She is also known for her work on detecting mislabelled plague images and is deeply immersed in efforts to bring together scientific work on the genetics of plague with historical studies to better understand how the disease moved across time and space. Her postdoctoral research addresses the interplay between manuscript and print versions of medical texts in the early modern era. In addition to several published articles and book chapters about plague texts, she is wrapping up a monograph version of her dissertation and is editing two upcoming volumes about premodern disease, death, and the environment in Europe, North Africa, and the Middle East.