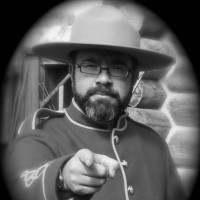 As a member of the Department of History and as the co-ordinator for the Medieval and Early Modern Studies (MEMS) program at Carleton, my teaching seeks to demystify the medieval world. This year, I am teaching a range of courses from an introduction to European history (HIST 1001, The Making of Europe) to advanced courses looking the medieval manuscripts in Carleton’s library (HIST 4007, The History of the Medieval Book). Together with students in MEMS, I am cataloguing the hitherto unidentified medieval manuscripts and fragments in Carleton’s Archives and Research Collection. If you are interested in medieval studies, but don’t see the course you’re looking for in History, check out the list of possible electives for MEMS here.

My research interests revolve around the lives and literary production of the monks of Cluny. The abbey of Cluny, located near Macon in the French region of Burgundy, was founded in the early tenth century. Its life revolved around the cultivation of virtue and the promotion of spiritual prestige through an unparalleled program of prayers, liturgical celebration and ritualized comportment. The monastery of Cluny was arguably one of the most prominent and powerful religious institutions from its founding to its dissolution during the French Revolution. Its first abbots were widely accepted as capable leaders in life and powerful saints after their death. By the twelfth century, the abbots of Cluny oversaw a vast network of houses spreading from England to the Levant. Under their tutelage, Cluny produced untold monks esteemed for their holiness and trained them to become bishops and even popes. Its abbots were advisers to kings and acted as architects of Church doctrine. The monks of Cluny did not withdraw from the secular world, but sought to engage with it.

My research work to date has focused mainly on three authors writing within the Cluniac milieu: the twelfth-century abbot of Cluny, Peter the Venerable, and two of his monks, Peter of Poitiers and Richard of Poitiers (also known as Richard of Cluny). Through the writing of these monks, I seek to explore the world view, the power relationships and the uses of literacy disseminated from Cluny.

Please contact me if you are interested in pursuing graduate research in medieval studies at the Department of History.

Thoughts on Friendship in the Letters of Peter the Venerable.” Revue Bénédictine 120 (December, 2010).

“Tracing the Twelfth-Century Chronica of Richard of Poitiers, monk of Cluny.” Memini: travaux et documents 8 (2004/05). Submitted and published in 2007.

Corinna Prior, “Crossing out of the Carolingian Cloister: An Examination of Interaction during the Monastic Reforms of 816-817,” (completed September, 2009).