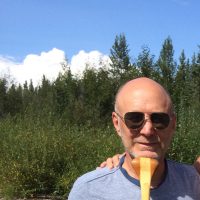 Mark Cronlund Anderson was raised on the shore of Lake of the Woods in Kenora, Ontario, and earned a PhD in Latin American History from the University of California. He taught at Brock University for six years, the University of Regina for sixteen years, and joined Carleton in 2018.

In 2001 he published Pancho Villa’s Revolution by Headlines. It explores propaganda operations during the Mexican Revolution. His second monograph, the award-winning Cowboy Imperialism and Hollywood Film (2007), examines the American frontier myth in popular film. His third study, co-authored with Carmen Robertson, the award-winning Seeing Red, A History of Natives in Canadian Newspapers (2011), plumbs and assesses how Canada’s press has portrayed Aboriginal peoples since 1867. Finally, his fourth monograph and sixth book, Holy War: Cowboys, Indians, and 9/11s (2016), traces an argument that illustrates how American history has been punctuated by 9/11-like events since the days of the Puritans, despite claims from George W. Bush and Noam Chomsky (yes, it’s true, they agreed on something!) that 9/11 stands as unique.

He is presently working on two books. The first attempts to untangle and perhaps shed a little common sense on settler Canada’s perfidious disposition to imagine all things Native through colonial lenses. It’s a study, in short, of a particular stream of national mythology. The second is a history of zombies, with a particular focus on what Richard Slotkin, in a related context, has termed “regeneration through violence.”

His graduate students have explored topics such as the increasing concentration of power of the American presidency, how Mexico City dailies imagined and framed Comandanta Ramona, how Hitchcock’s film The Birds channelled and expressed a terror of nuclear war, and an ethnohistory of the File Hills Colony in Saskatchewan.

Mark and his family like to travel and love the out of doors—canoe tripping, hiking, mountain biking, fishing (and fish stories). Last summer they built a cordwood sauna in the Yukon.