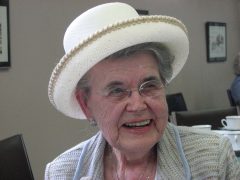 Beatrice Lois May Long, known as Lois, grew up on a dairy farm in Nepean, a descendant of early Irish settlers.  Following a career as a medical laboratory technologist that took her to the Canadian North as well as to work in Ottawa, she traveled extensively and explored long-standing interests in photography, local and family history, western migration, and the historical links between Ireland and Canada.

Miss Long was a major source of support, advice, and information for published works by Carleton history students, including histories of Britannia and Nepean and a study of Irish immigration.  She was responsible for the photographs in an earlier Nepean history.  Miss Long was a founding member and donor and a continuous benefactor of the Nepean Museum and of the East Clare Heritage Centre in Tuamgraney, Ireland.  She was also a member of the Gloucester and Osgoode Township Historical Societies.

In 1998 Lois donated her collection of 1950s Inuit sculpture, collected during her travels in the Arctic, to the Carleton University Art Gallery.  The Shannon Fund was established in 1999 and the first series of the Shannon Lectures in History funded by the endowment was held in 2002. 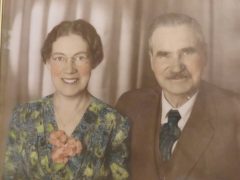 Lois’s father James Buchanan Long (1876-1947) was a trustee of the Merivale School Board, a member of Nepean Township Council, president of the Ottawa Valley Milk Producers Association, and president of the Carleton County Conservative Association.  The stone house that he built for himself in 1904 still stands in the Longfields subdivision that occupies the site of the family farm.  He married later in life, in 1919, to Ida May Davidson, who died in 1986.  The stone house, home also to Jim’s wife Ida and only child Lois, was designated as a heritage building by the former City of Nepean in 1990.